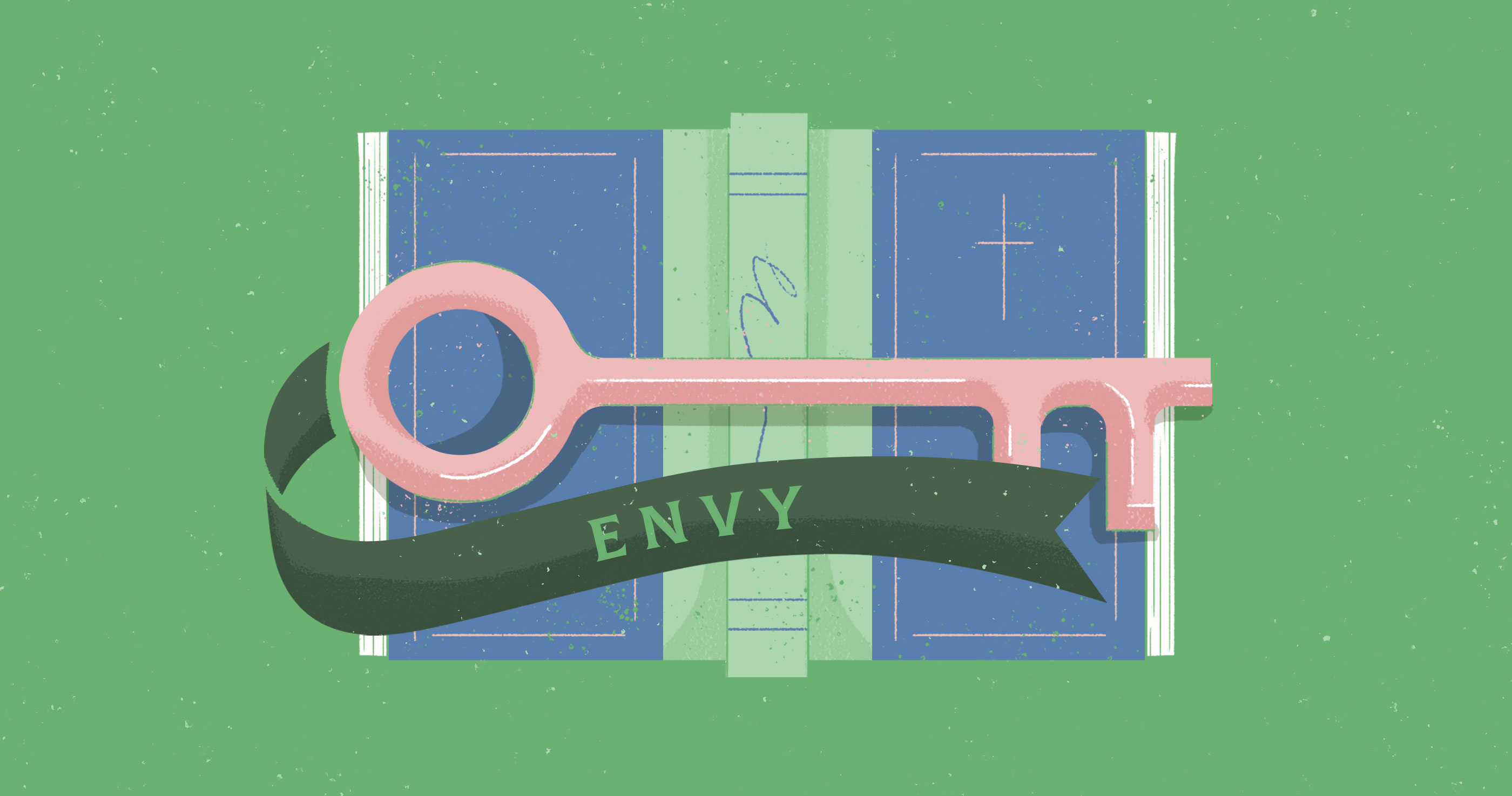 While the previous four commandments focus on actions committed or words spoken (Ex. 20:13–16), the tenth commandment warns against allowing the heart to covet . . . anything that is your neighbor’s. When a person covets, he allows the desire for that which is coveted to govern his relationship with other people; this may become the motivation for murder, stealing, or lying either to attain the desired thing or to keep it from someone else. Because of the way that coveting values a particular thing over trust in and obedience to the Lord as the provider, it is also a breach of the first commandment, which the apostle Paul makes clear when he refers to coveting as idolatry (Eph. 5:5; Col. 3:5).

Fret not yourself because of evildoers;
be not envious of wrongdoers!
For they will soon fade like the grass
and wither like the green herb.
Trust in the LORD, and do good;
dwell in the land and befriend faithfulness. Read More

Let not your heart envy sinners,
but continue in the fear of the LORD all the day.
Surely there is a future,
and your hope will not be cut off. Read More

Instead of envying those who disregard God’s way, one should make pleasing the Lord one’s top priority (Prov. 23:17), because such a path embodies the true hope that there is a future for the godly (Prov. 24:14, 20; Ps. 37:9–11, 34, 37–38). Although Proverbs does not refer explicitly to the nature of this “future” (cf. Prov. 10:2; Prov. 11:4; Prov. 14:32), its encouragement to walk in the fear of the LORD presents the benefits of wisdom as fixing and guarding not only the present path but also the eternal destiny to which the path leads.

For you are still of the flesh. For while there is jealousy and strife among you, are you not of the flesh and behaving only in a human way? Read More

The first instance of the phrase of the flesh represents a Greek word (sarkinos) that means “characterized by the flesh” (cf. Rom. 7:14). The second instance (1 Cor. 3:3) represents a slightly different word (sarkikos) that means “made of flesh, fleshly” (2 Cor. 10:4; cf. 2 Cor. 1:17). Paul uses both terms here in the same way to express his disappointment in the Corinthians’ behavior. “Flesh” takes different meanings in Scripture, but in Paul’s letters it often refers to “unredeemed human nature” with all of its desires and characteristic behavior. Although the Corinthians are Christians indwelt by the Spirit, their divisive behavior shows that they are acting like the unbelieving world around them.

Paul thinks it is unhelpful and dangerous to give advanced teaching to Christians who were morally and spiritually immature and proud.

Then I saw that all toil and all skill in work come from a man’s envy of his neighbor. This also is vanity and a striving after wind. Read More

The Preacher observes that much of what is achieved by skillful human labor stems from a man’s envy of his neighbor. The term translated “envy” (Hb. qin’ah) can have either negative or positive moral connotations, depending on the context (much like English “jealousy” and “zeal”). Here the Preacher focuses on the vanity that comes to those who make such striving their ultimate good, rather than a desire to serve the Lord (cf. Col. 3:24). If a man folds his hands—i.e., refuses to work—he only ruins himself. Finally, the Preacher adds a word of caution against excessive striving: instead of two hands full of toil and striving after wind (something fleeting; see Eccles. 4:8), one should learn to be content with less (one single handful of quietness).

Verse 2 consists of several short statements; there was no punctuation in ancient Greek, and various translations connect the statements in different ways. The ESV punctuation works well when comparing this verse to James 3:13–18: people desire and covet (Gk. zēloō, cf. zēlos, “jealousy,” James 3:14), which leads to the terrible wars and infighting in the church. “You do not have, because you do not ask” is a reminder that believers should ask God for what they seek rather than fighting each other. Prayerlessness results in failure to receive many of God’s blessings. James does not imply that God wills to grant sinful, selfish desires (James 4:3), but bringing requests before God can have a purifying influence on one’s desires.

But if you have bitter jealousy and selfish ambition in your hearts, do not boast and be false to the truth. Read More

Bitter jealousy and selfish ambition are the antithesis of true wisdom as characterized by “meekness” (James 3:13). They are also far different from the righteous character of a “jealous God” (Ex. 20:5; 34:14; Deut. 4:24; see James 4:5), who appropriately yearns for his own honor and the loyal devotion of his people, while the envious yearn for what does not belong to them. “Selfish ambition” is a divisive willingness to split the group in order to achieve personal power and prestige (it is translated “rivalry” in Gal. 5:20; Phil. 1:17; 2:3).

James describes worldly behavior in terms that “progress” from bad to worse. Such behavior is ultimately earthbound, absolutely sensual as opposed to spiritual, and its origin is in the cosmic powers of darkness. The final result of such Satan-driven conflict can only be disorder and every vile practice. The answer to the “disorder” of James 3:16 is to seek wisdom from above, which produces character qualities beginning with purity and concluding with peace (cf. Gal. 5:22–23, where godly qualities are the fruit of the Spirit).

The love of the Father implants a desire to break with idolization of the world. “Do not love the world” should not be read as an utter rejection of the world, for “God . . . loved the world” (John 3:16). Rather, John warns against devotion to a world system that is opposed to God (cf. John 12:31; James 4:4; 1 John 5:19). Love of the Father probably carries a double meaning, referring both to the love God has for his people and the love they have for him. The former generates the latter (1 John 4:7, 9–10).

In warning against all that is in the world, John does not demonize the whole created order (cf. Gen. 1:31). Rather, he gives examples (desires of the flesh, etc.) of what the believer should guard against. Human desires are part of God’s creation and therefore not inherently evil, but they become twisted when not directed by and toward God.

Paul does not dare to join them in their kind of self-recommendation; they are without understanding because their criterion for boasting (one another) is wrong. The opponents recommend each other by comparing their abilities, spiritual gifts, and experiences, all of which are irrelevant for establishing apostolic authority in a church.

This hymn is usually classified as a psalm of confidence in the Lord’s care. It uses two images: the Lord as Shepherd who cares for the sheep (Ps. 1–4), and the Lord as Host who cares for his guest (Ps. 5–6). These images would be familiar from everyday experience (for David’s own, cf. 1 Sam. 17:34); but they also evoke other ideas common in the ancient Near East (including the OT), with the deity as shepherd of his people and the deity as host of the meal. In worship, the faithful celebrate God’s greatness and majesty; and when they sing this psalm, they see his majesty in the way he personally attends to each of his covenant lambs. He is the shepherd for Israel as a whole; and in being such, he is the shepherd for each faithful Israelite as well.