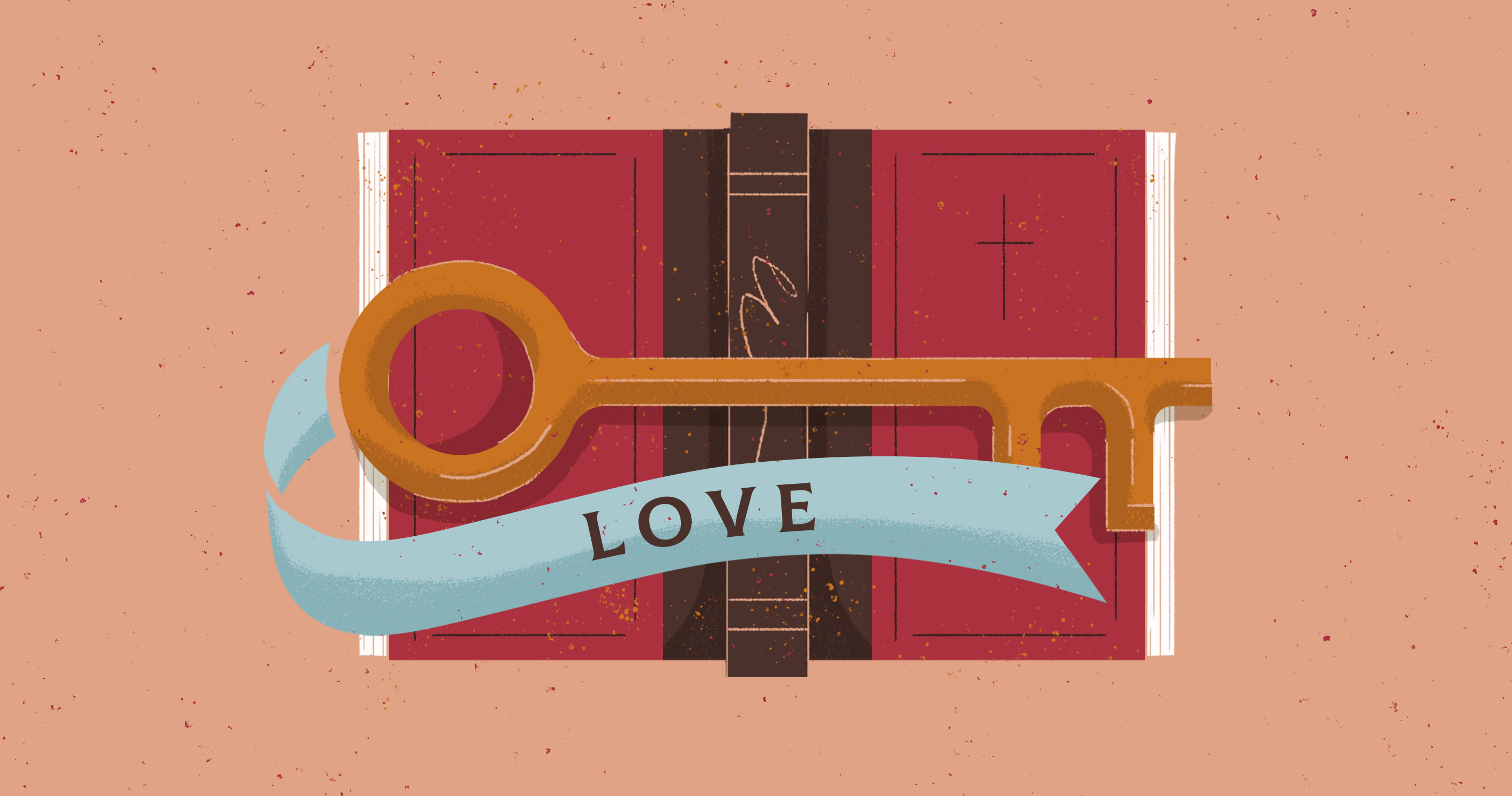 The biblical picture of love can differ wildly from how the world defines it. Be set aright and encouraged by these verses and commentary adapted from the ESV Study Bible.

The terms believes and hopes are sandwiched between bears and endures and, like them, probably refer to relationships between people rather than to faith and hope in God. Love believes the best of others and hopes the best for them.

Love never ends. As for prophecies, they will pass away; as for tongues, they will cease; as for knowledge, it will pass away. Interpreters differ over the time when Paul expects prophecies to pass away and tongues to cease (along with other gifts represented by these examples). The “cessationist” view is that miraculous gifts such as prophecy, healing, tongues, interpretation, and miracles were given to authenticate the apostles and their writings in the early years of the church, but those gifts “ceased” once the entire New Testament was written and the apostles died (c. A.D. 100). Others hold that Paul expected these gifts to continue until Christ returns, which will be the time when “the perfect” (1 Cor. 13:10) ways of speaking and knowing in the age to come replace the “in part” (1 Cor. 13:9) gifts of this age. Support for the second position is found in 1 Corinthians 13:12, which indicates that “then” (the time when these gifts will cease) is the time of Christ’s return.

Husbands, love your wives, as Christ loved the church and gave himself up for her, that he might sanctify her, having cleansed her by the washing of water with the word, so that he might present the church to himself in splendor, without spot or wrinkle or any such thing, that she might be holy and without blemish.

Paul turns to the duty of husbands. He does not command the husband to submit to his wife but instead tells the husband that he must give himself up for her. Thus, husbands are to love their wives in a self-sacrificial manner, following the example of Christ, who “gave himself up for” the church in loving self-sacrifice. Clearly the biblical picture of a husband laying down his life for his wife is directly opposed to any kind of male tyranny or oppression. The husband is bound by love to ensure that his wife finds their marriage a source of rich fulfillment and joyful service to the Lord. Notably, Paul devotes three times more space to the husband’s duty (nine verses) than to the wife’s (three verses).

The focus in these verses is on Christ, for husbands do not “sanctify” their wives or “wash” them of their sins, though they are to do all in their power to promote their wives’ holiness. Sanctify here means to consecrate into the Lord’s service through cleansing. washing of water. This might be a reference to baptism, since it is common in the Bible to speak of invisible, spiritual things (in this case, spiritual cleansing) by pointing to an outward physical sign of them (see Rom. 6:3–4). There may also be a link here to Ezekiel 16:1–13, where the Lord washes infant Israel, raises her, and eventually elevates her to royalty and marries her, which would correspond to presenting the church to himself in splendor at his marriage supper (see also Ezek. 36:25; Rev. 19:7–9; 21:2, 9–11). The church’s utter holiness and moral perfection will be consummated in resurrection glory, but is derived from the consecrating sacrifice of Christ on the cross.

I therefore, a prisoner for the Lord, urge you to walk in a manner worthy of the calling to which you have been called, with all humility and gentleness, with patience, bearing with one another in love, eager to maintain the unity of the Spirit in the bond of peace.

Paul explains his calling and ministry as an apostle to the Gentiles. This was to assure his Gentile readers that their share in the inheritance is authentic because of its divine origin. Paul suffered imprisonment or confinement several times in the service of Christ (Eph 4:1; Acts 16:23; 24:23; Col. 4:10; 2 Tim. 1:8; Philem. 1).

Set me as a seal upon your heart,
as a seal upon your arm,
for love is strong as death,
jealousy is fierce as the grave.
Its flashes are flashes of fire,
the very flame of the LORD.
Many waters cannot quench love,
neither can floods drown it.
If a man offered for love
all the wealth of his house,
he would be utterly despised.

A seal could be a stamp or a cylinder (the latter being less common), and could be attached to a person by a band (and thereby hang from the neck or arm) or worn as a ring. It was pressed into clay to create an image or an inscription that assigned ownership of an object. Love, like death, is relentlessly persistent, always accomplishing its goal. Here jealousy (which parallels “love” in the preceding line) is a resolute devotion rather than a selfish ambition; only such devotion can rightly describe the relationship with God and with one’s spouse.

This is the only mention of the divine name in the entire Song of Solomon, but it is fitting in a book of covenant wisdom. This statement indicates that both love and a jealousy to protect marriage are given by God. The image of many waters that cannot quench love picks up the image of love as a fire in Song of Solomon 8:6; the floods that are unable to drown it (or “overwhelm”; cf. Isa. 43:2) are another image.

Let not steadfast love and faithfulness forsake you;
bind them around your neck;
write them on the tablet of your heart.
So you will find favor and good success
in the sight of God and man.

These terms are used together in the Lord’s self-declaration to Moses of his character in covenantal relationship (Ex. 34:6, “abounding in steadfast love and faithfulness”). In light of the appeals to trust (Prov. 3:5), fear (Prov. 3:7), and honor (Prov. 3:9) the Lord, the call here to bind them around your neck and write them on the tablet of your heart is best understood as encouragement to live faithfully to the covenant (see also Prov.14:22; Prov.16:6; Prov.20:28) by heeding faithful parental instruction (cf. Ps. 25:10).

Assurance of salvation, while never an arrogant presumption, can become a settled state of mind and heart. “By this” refers to the previous verse, where John speaks of believers abiding in God and God abiding in them.

Either eternal life or eternal punishment awaits all humanity (see John 3:36), and God’s love furnishes a sure hope for those who have trusted in him. as he is so also are we in this world. Just as the Son was and is present in the world in a loving fashion that in no way attracted divine displeasure, so are the Son’s followers. The love that Christ embodied and lived out among believers is their confidence in the day of judgment.

No fear in love does not rule out the presence and constructive effect of “the fear of the Lord” that is “the beginning of knowledge” (Prov. 1:7). Here John speaks of fear of final judgment (cf. 1 John 4:17). God’s perfect love for believers casts out the fear of wrath and eternal punishment.

Christian love is a gift from God, demonstrated supremely in the cross (see Rom. 5:8). God’s love always takes the initiative, and the love of Christians is a response to that love. Likewise, all morally good human actions are good not because they conform to some arbitrary human standard of good but because they are rooted in imitation of the morally perfect character of God and conform to God’s commands.

Above all, keep loving one another earnestly, since love covers a multitude of sins.

Enduring love for others testifies that a person is living in light of the future. True love covers a multitude of other people’s sins (Prov. 10:12). Where love abounds, offenses are frequently overlooked and quickly forgotten. Hospitality, much admired in both Greco-Roman and Jewish sources (cf. 1 Tim. 3:2; Titus 1:8), was much needed in an era when inns could be dangerous and unpleasant.

Put on then, as God’s chosen ones, holy and beloved, compassionate hearts, kindness, humility, meekness, and patience, bearing with one another and, if one has a complaint against another, forgiving each other; as the Lord has forgiven you, so you also must forgive. And above all these put on love, which binds everything together in perfect harmony.

Paul calls the Colossians to a holy lifestyle, consistent with their new identity. Believers have been chosen by God and stand before him as his beloved holy ones. They are to live up to what they are in Christ.

Tolerance is a virtue within the Christian community, although Paul clearly does not want the Colossians to tolerate the false teaching. When wronged and betrayed, Christians are called to forgive others, even as they have been forgiven for their betrayal of Christ. See Matt. 6:12, 14–15; 18:21–22. Above all else, Christians are called on to love one another (see 1 Cor. 13). “Binds . . . together” may suggest that love unites all the virtues.

Owe no one anything, except to love each other, for the one who loves another has fulfilled the law.

Romans 13:8–10 focuses on the Christian’s relationship to the Mosaic law. Owe no one anything links back to Romans 13:7, and thus the command does not prohibit all borrowing but means that one should always “pay what is owed,” fulfilling whatever repayment agreements have been made. The debt one never ceases paying is the call to love one another. Indeed, love fulfills what the Mosaic law demands.

And let us consider how to stir up one another to love and good works, not neglecting to meet together, as is the habit of some, but encouraging one another, and all the more as you see the Day drawing near.

The third and final exhortation in Hebrews 10:22–25 calls for serious thinking about other Christians with a purpose to stir up (or “provoke”) them in their love and service (good works). Christian perseverance is thus also a community endeavor. Community encouragement toward perseverance requires being together. That some were neglecting this duty may have been among the motives for the author’s warnings throughout this book. Voicing exhortation with the goal of strengthening another’s faith (see Heb. 3:13; cf. Heb. 13:22).