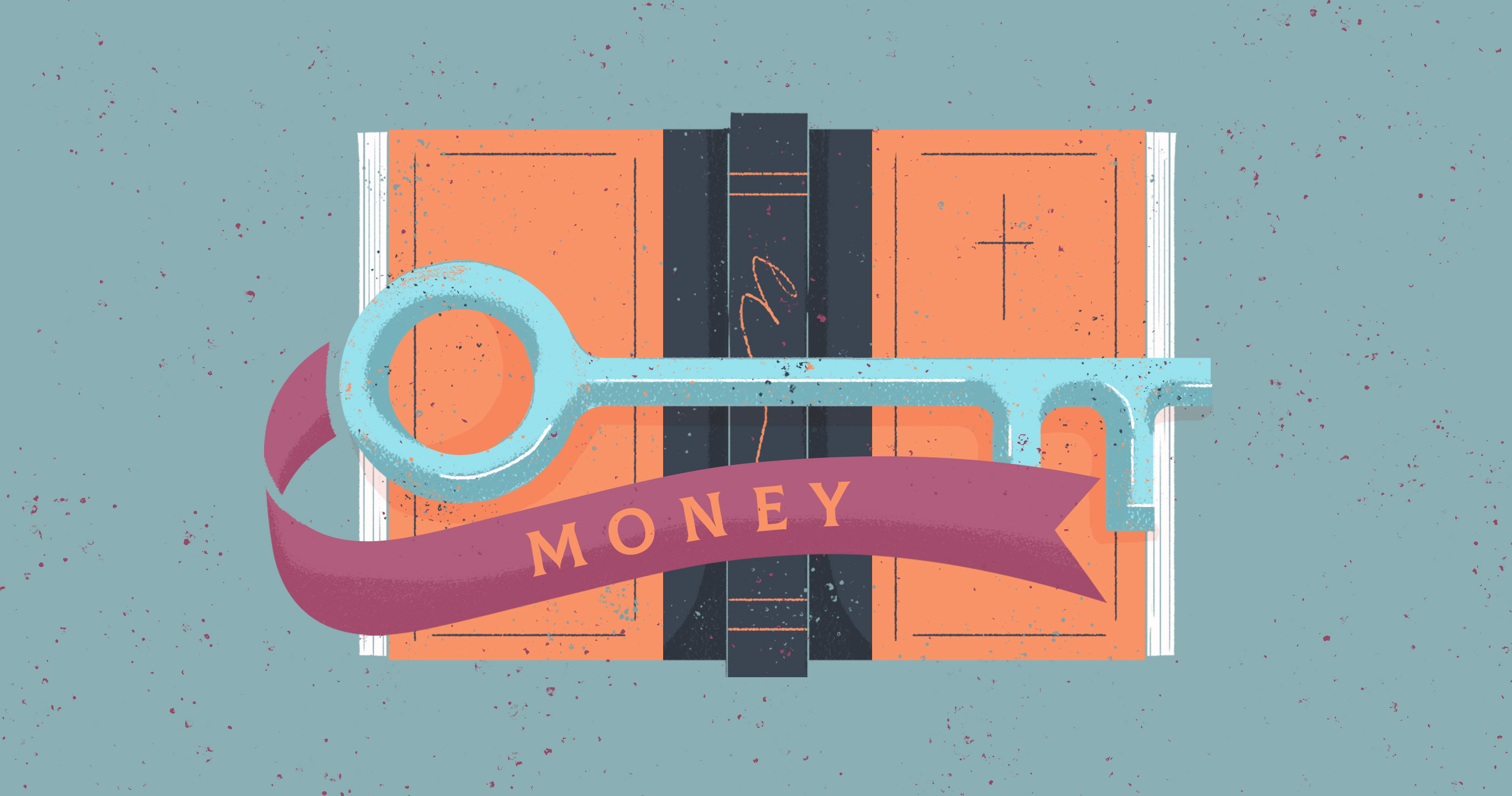 “Serve” (Gk. douleuō) indicates the work of a slave, not an employee. Since a slave is the sole property of one master, he must give the master exclusive service. A disciple’s loyalties cannot be divided—that is, one is either a slave to God or to money.

Honor the LORD with your wealth
and with the firstfruits of all your produce;
then your barns will be filled with plenty,
and your vats will be bursting with wine. Read More

Honoring the Lord requires giving proper weight to your wealth by using it only for righteous, just, and equitable purposes (“in all your ways acknowledge him,” Prov. 3:6), which begins with offering the firstfruits of everything to the Lord (see Deut. 18:1–5). To give the firstfruits is to imply that the whole belongs to God, indeed the whole worshiper. The prosperity described in Proverbs 3:10 is the blessing of the covenant (Deut. 28:1–14), a kind of restored Eden. Your barns will be filled with plenty is a generalization concerning the effect of honoring the Lord with all that one has and is. It is not, however, more than a generalization (as Job’s comforters held), for to view this as a mechanical formula dishonors God and his inscrutable sovereign purposes.

And Jesus, looking at him, loved him, and said to him, “You lack one thing: go, sell all that you have and give to the poor, and you will have treasure in heaven; and come, follow me.” Disheartened by the saying, he went away sorrowful, for he had great possessions. And Jesus looked around and said to his disciples, “How difficult it will be for those who have wealth to enter the kingdom of God!”* Read More

Jesus speaks lovingly to the man’s heart. You lack one thing. The man has replaced direct trust in God and its reward (treasure in heaven) with earthly riches. He thus fails the first commandment, “You shall have no other gods before me” (Ex. 20:3). This does not mean that every disciple of Christ must sell all that he has; rather, the heart must be focused on God, and every possession yielded to God, with the result that possessions will be handled as a form of stewardship.

Material possessions can be a dangerous instrument for reinforcing self-sufficiency and independence from God. Anyone who trusts in riches (as an idolatrous replacement for God; Matt. 6:24) cannot enter the kingdom of God; his life disposition is diametrically opposed to submitting to God’s will. The hyperbole of a large camel having to fit through the small eye of a needle stresses that such a thing is humanly impossible (but see Mark 10:27). For other hyperboles in Jesus’ teaching, see Matthew 7:3–5; 23:24; on the “eye of a needle.”

The master’s identical statements of praise to both servants show that what was important was not the total amount earned but faithfulness in utilizing their gifts and potential. You have been faithful over a little; I will set you over much. Faithful stewardship in this life will result in being given greater responsibility and stewardship in the life to come.

Using one’s God-given abilities wisely and productively is a vital aspect of discipleship and will be rewarded with additional opportunities to serve God faithfully and fruitfully.

For we brought nothing into the world, and we cannot take anything out of the world. But if we have food and clothing, with these we will be content. But those who desire to be rich fall into temptation, into a snare, into many senseless and harmful desires that plunge people into ruin and destruction. For the love of money is a root of all kinds of evils. It is through this craving that some have wandered away from the faith and pierced themselves with many pangs. Read More

An eternal perspective (1 Tim. 6:7) helps believers to avoid the allure of greed, with the result that they are content with what God has given them, even if it consists of only food and clothing.

What is condemned here is the desire to be rich, not material things per se when rightly used for the glory of God. The desire to be rich leads one to fall into temptation. This in turn results in the love of money, which Paul identifies as a root of all kinds of evils (1 Tim. 6:10). The connection between false teaching and the desire to be rich has been a problem from the church’s very beginning. wandered away from the faith. The warning is not simply that “love of money” is harmful but that this has led some to deny the faith, showing themselves to be unbelievers (1 Tim. 1:19).

Whoever trusts in his riches will fall,
but the righteous will flourish like a green leaf. Read More

The ultimate destinies of the wicked and the righteous (e.g., Prov. 11:23 and Prov. 11:31) are reflected in their actions (Prov. 11:27) and are prefigured in the response of those affected by such actions (Prov. 11:26). The particular actions in focus are the way a person relates to provisions and people (Prov. 11:24–26, 28). The benefit of the generous life of the righteous for themselves and for others is represented throughout the section in several agricultural images: waters/watered (Prov. 11:25), flourish like a green leaf (Prov. 11:28), fruit (Prov. 11:30), and tree of life (Prov. 11:30). These images represent a fuller illustration of the statement in Proverbs 11:18: “one who sows righteousness gets a sure reward.”

He who loves money will not be satisfied with money, nor he who loves wealth with his income; this also is vanity. When goods increase, they increase who eat them, and what advantage has their owner but to see them with his eyes? Sweet is the sleep of a laborer, whether he eats little or much, but the full stomach of the rich will not let him sleep.

There is a grievous evil that I have seen under the sun: riches were kept by their owner to his hurt, and those riches were lost in a bad venture. And he is father of a son, but he has nothing in his hand. Read More

The Preacher observes the destructive nature of greed and concludes that contentment is a key characteristic of the godly life in this world (cf. Phil. 4:11; 1 Tim. 6:6, 8; Heb. 13:5).

“Riches were kept . . . to his hurt” i.e., the owner endured hardship and sacrifice in order to acquire his wealth but was never able to enjoy it, as it was lost in a bad venture, so that he neither enjoyed his riches nor did anything worthwhile with them. To make matters worse, he had a family to provide for.

The man’s selfish, fearful greed resulted in a truly wretched life. The one to whom God grants contentment will not allow the darker realities of human existence to overshadow divinely bestowed blessings.

And I will say to my soul, “Soul, you have ample goods laid up for many years; relax, eat, drink, be merry.”’ But God said to him, ‘Fool! This night your soul is required of you, and the things you have prepared, whose will they be?’ So is the one who lays up treasure for himself and is not rich toward God.” Read More

Ironically, the man who took such great care to prepare for his own (earthly) needs turns out to be a fool. Instead of fulfilling his moral responsibility to care for the needs of others, he is rebuked for laying up treasure for himself and for not being rich toward God. Though this verse does not prohibit wealth, Jesus clearly warns his hearers concerning the dangerous eternal implications of wealth, with its seductive tendency toward complacency, self-sufficiency, and covetousness. Though the rich fool anticipates years of ease—a time to eat, drink, be merry—instead an eternal destiny apart from God awaits him. As Jesus’ condemning words confirm, “This night your soul is required of you.”

Whoever works his land will have plenty of bread,
but he who follows worthless pursuits will have plenty of poverty.
A faithful man will abound with blessings,
but whoever hastens to be rich will not go unpunished.
To show partiality is not good,
but for a piece of bread a man will do wrong.
A stingy man hastens after wealth
and does not know that poverty will come upon him.
Whoever rebukes a man will afterward find more favor
than he who flatters with his tongue.
Whoever robs his father or his mother
and says, “That is no transgression,”
A greedy man stirs up strife,
but the one who trusts in the LORD will be enriched.
Whoever trusts in his own mind is a fool,
but he who walks in wisdom will be delivered.
Whoever gives to the poor will not want,
but he who hides his eyes will get many a curse. Read More