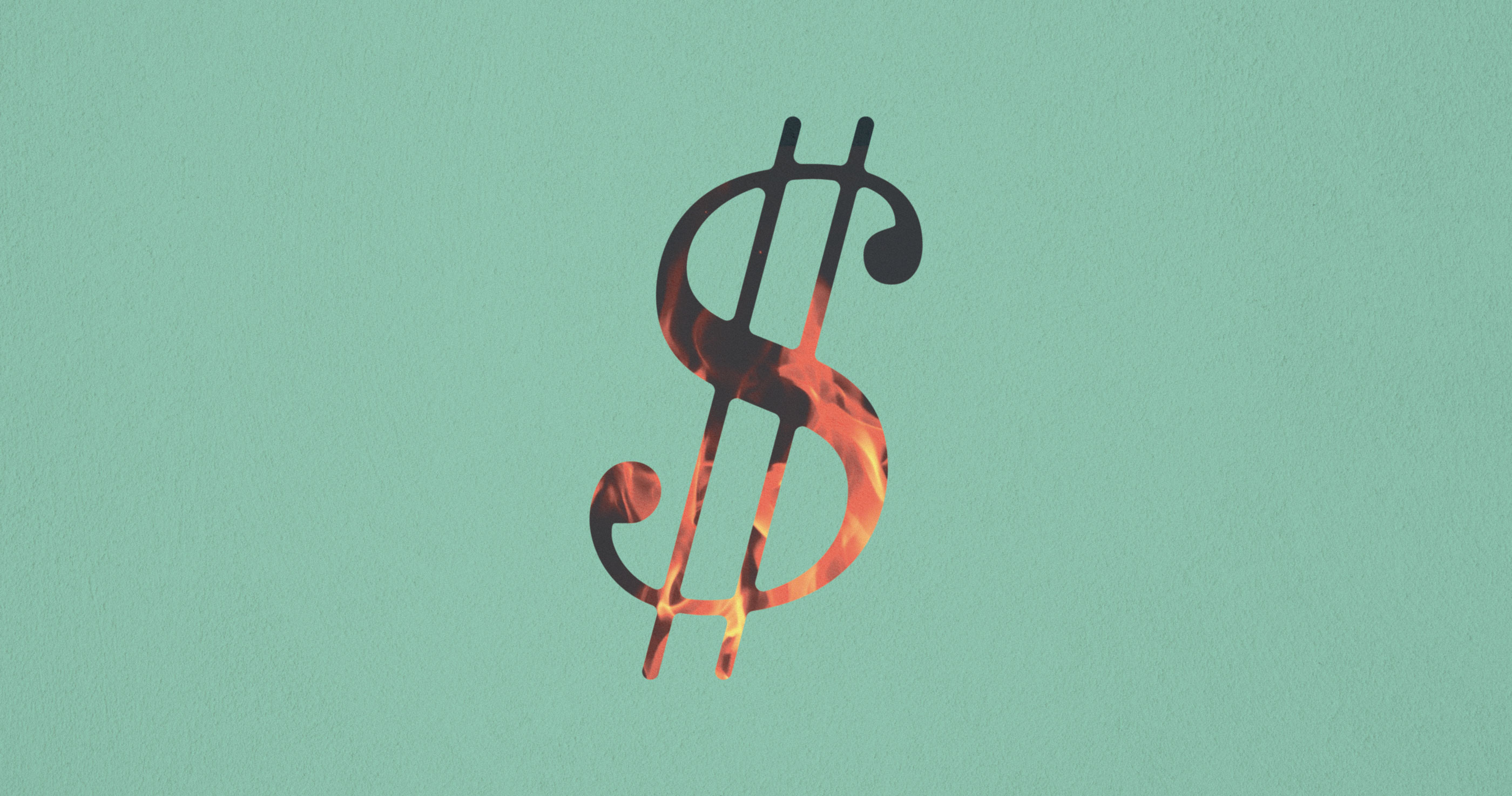 1. Money can cause you to forget God.

Physical neediness can cause you to cry out to God for help, and as you cry out for help, you come to realize that you need it not only physically but also spiritually. A pastor of a church in an extremely affluent community told me that since his people are able to buy their way into or out of just about anything, it is hard for them to think of themselves as needy. The supposed self-reliance of wealth can tempt us to believe in the larger delusion of our autonomy—that we have a right to live life as we want—and of our self-sufficiency—that we have within ourselves all we need to be what we’re supposed to be and to do what we’re supposed to do. Money can allow us to afford a self-centered way of living that acts as if nothing is greater than us and more important than our individual wants, needs, and feelings.

Now, don’t get me wrong here. There is no teaching in Scripture that would lead us to believe that poor people are better off spiritually than others. My point is to alert you to one of the dangers of money. Money can function as an ingredient in a lifestyle that, at street level, forgets God’s existence and his plan. This lifestyle is more about personal glory than God’s glory, and it reduces one’s expenditure of money to personal desire, self-defined need, and the pursuit of individual comfort and pleasure. Those caught in that lifestyle may not theologically deny the existence of God, but their money supports a lifestyle that ignores it.

As money redefines your identity, it can also change the way you look at others.

2. Money can change the way you think about you.

Money is a stimulant. It will be used to stimulate a Godward way of life or an inward way of life. A friend told me that for years he had prided himself on being committed to and contented with a “simple” lifestyle, that is, until he came into money. Suddenly he found himself wanting the more luxurious car; he was attracted to the more expensive shirt, and he wanted to eat at the better restaurant. He said, “It was humbling to admit that I hadn’t been living the simple life because I was spiritually committed to it. I’d been living the simple life because I was poor.”

Money can encourage you to be more self-focused and demanding; it can edge you toward being discontent with what once made you content, and, even more dangerous, money can move you to begin to expect from life what you should not expect and to feel that you deserve what you do not deserve. Money really can have a huge influence on how you define yourself and how you think about your life and on the expectations that shape your disappointments.

3. Money can cause you to look down on others.

What was going on was very clear and very sad. The affluent kids stood around and made fun of a homeless man who was doing his best to get out of their way. What was the difference between the kids and the homeless man? Well, in the deepest and most profound way, there was no difference. The kids and the homeless guy were all made in the image of God and meant to reflect his glory. They were all sinners in desperate need of redemption. Neither the homeless man nor the affluent teenagers had been in charge of all the circumstances that had led them to their place in life. Neither the kids nor the man could stand before God and say they deserve anything. But the boys didn’t see themselves as similar to the man. They saw themselves as a higher order of human being, and they treated the poor man as less than human.

What caused them to think the way they thought and to treat the man the way they did? Well, there are many answers to that question, too many for us to consider here, but there was one major ingredient that fueled it all—money. To those suburban high school boys, this man was a vagrant, a bum, a loser. They were the chosen ones. It was ugly and mean, but it pictured one of the dangers of money. As money redefines your identity, it can also change the way you look at others. Money can stimulate the prideful prejudice that lurks somewhere in the heart of every sinner.

4. Money can weaken your resolve to fight temptation.

When my friend made his simple-life admission, he was saying something else. In a real way, his poverty had protected him from being able to fully follow the trail of his greed. No, it hadn’t protected him from being envious and discontented at points, but he simply did not have the money to pay for what his selfish heart could imagine. This point is precisely why the Bible does alert us to the danger of riches. We come into this world as people who need to be retrained. We come into this world as a danger to ourselves. We are naturally more discontented than contented. We are naturally attracted to what should scare us. We intuitively push against God’s boundaries. So anything in our lives that protects us from us, anything that restrains us, or anything that makes it hard to go where our desires wander is a blessing.

Money is a danger in that it removes a restraint—affordability—and in so doing, exposes our hearts. It’s only when God’s grace has formed in us truly contented hearts that we can live retrained lives, not following the rabbit trail of every selfish desire that our wallets can afford. Look, most of us regularly buy what we do not need because we have followed desires that need to be restrained, and restraint is needed because we can afford whatever in that moment has caught the attention of our hearts.

Filled with biblical wisdom and aimed at debunking the false promises people often believe about money, this book by best-selling author Paul David Tripp gives a fresh understanding of money through the lens of the gospel.

5. Money can finance your allegiance to the kingdom of self.

Well, this is the bottom line. I’ve already said much about it, but this point too requires more special attention. There is no neutrality when it comes to your relationship to and daily use of money. As you hold and use your money, you must constantly remind yourself that the holding and using of money are acts of worship. That’s just how significant this issue is. Either you are using your funds in the worship of yourself, even if you don’t know it, or you are using your money in the self-conscious worship of God. You money is being invested in the building of your self-focused little kingdom of one or being offered in the interests of the grand and glorious eternal kingdom of God. This is the temptation that every sinner faces, to use the resources he has been given to finance the wants, needs, and desires of the kingdom of self, and the more money that is in his hands, the more power this temptation tends to have.

So, money really does matter. You’ve been placed by God in a world where money exists and will influence the shape and direction of your life. Because money exposes you to both blessing and danger, your issues with money run at a deeper level than how much you understand finances and how well you have constructed your budget. Are money, education, and budget beneficial? Of course! But they do not get down to the level where the real danger of money exists.

When I misuse money, I don’t misuse it because I am ignorant or without a budget. No, I misuse it because at that point I don’t care what God or anyone else says. I want what I want, and if I can use my resources to get it, I am going to get it. Money matters because it interacts with one of the most significant issues in my heart: the selfishness of sin. No amount of money, education, or budget construction has the power to free me from the ravenous greed of my sinful heart. For that, I can look only to one thing: the powerful grace of my Redeemer. He knows how selfish and greedy I can be. He knows how I make a resolution one day that I abandon the next. He knows how easily I am seduced into thinking that there is something in the creation that will satisfy my longing heart. He knows that I can say I believe in God yet live as if he does not exist. So, he has blessed me with his right-here, right-now grace. Yes, that grace forgives me, but it does more: it provides everything I need to live in the money-crazy world in the way that I was designed to live. What is the sweetest gift of that grace? Well, the sweetest gift is not a thing; it is a person. God’s best gift is himself. He comes and lives inside of me so that when desire within meets temptation without, I will have just what I need to fight the battle.

Money matters, but God’s grace matters even more. It alone provides both the strength and the freedom we will continue to need until the dangers of money are no more.

This article is adapted from Redeeming Money: How God Reveals and Reorients Our Hearts by Paul David Tripp.

What Did Jesus Teach about Money?

We keep telling ourselves that the next thing will be what satisfies us, but it never does.

Are Pastors Free to Accumulate Wealth?

Few people acknowledge the narratives that drive the assumptions that provide our framework for how we relate to money.

4 Things Dads Should Teach Their Kids about Money

Your kids need more than practical tips for managing their money. They need theology.

A Shelter in the Time of Storm
Paul David Tripp