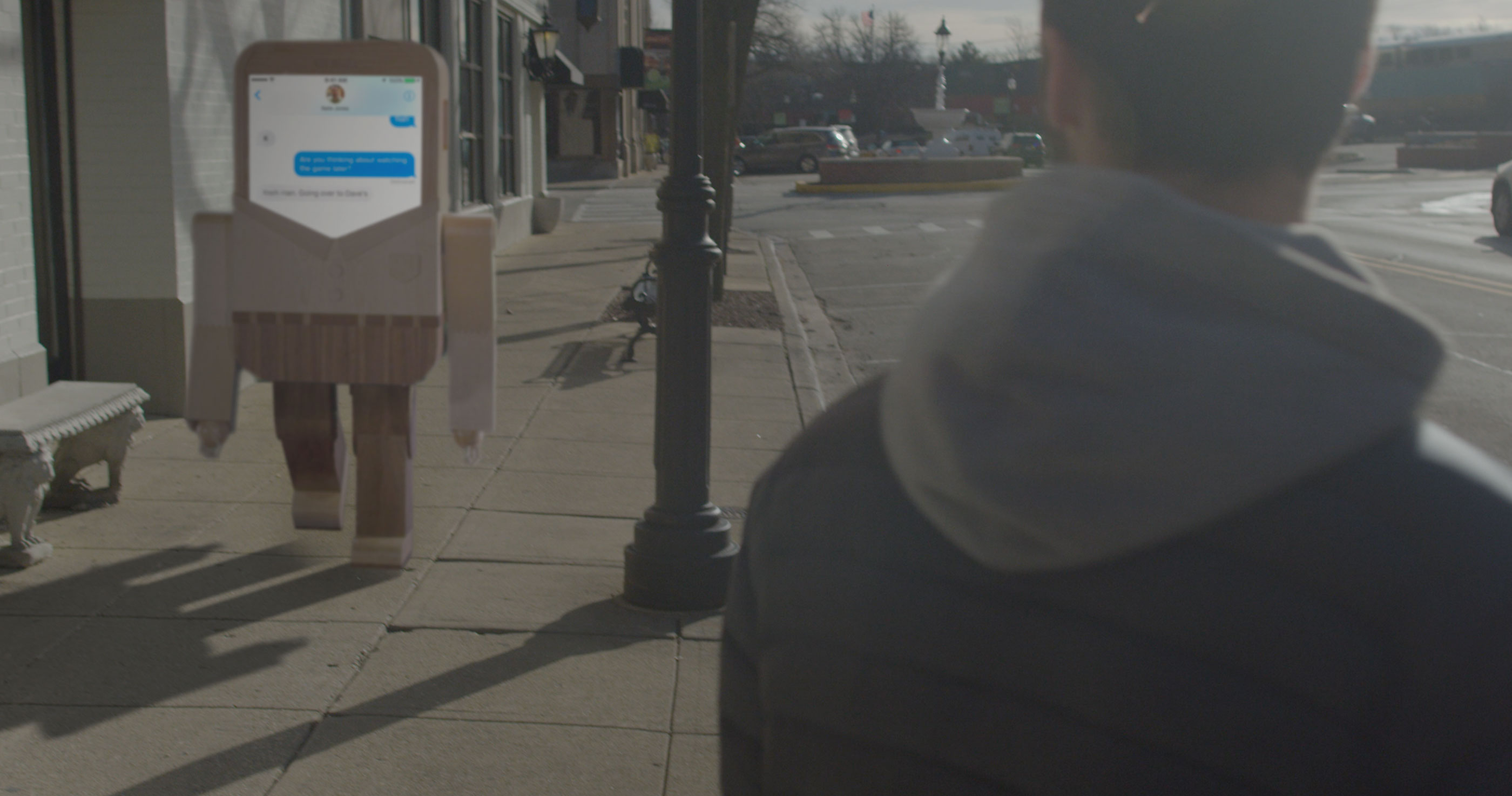 Missing a potential spouse, missing a perfect job offer, missing a golden stock tip, or missing a party with our friends—missing out leaves a sting of regret we all hate. Foresight is blurry, but hindsight is 20/20, and that means we remember our past misses with crystal clarity. When we miss out too many times, we can begin to dread the next miss inordinately.

FOMO can be diagnosed through more basic symptoms of “disconnection anxiety,” also known as “no-mobile-phone phobia”—nomophobia—the fret when we find ourselves prevented from accessing our digital worlds. This strain of FOMO is highly contagious and progresses rapidly. For example, one young woman, who was raised offline in an Amish community for eighteen years before entering the online world, quickly caught the disconnection fever. After adjusting to the non-Amish life and adapting to digital America, she took an offline mission trip. “I was thinking, I just can’t wait to go back to the US where I can be connected to technology again and see what all is happening. Because it feels like I’m naked or something without being constantly updated on what’s going on.”2

If a former Amish woman who didn’t touch an iPhone until adulthood, and who maintains relatively healthy online habits, is susceptible to this fear, I suspect many of my worst phone habits are born from FOMO. I want to know, I want to see, and I don’t want to be left out.

My desire to never be socially left out comes at the price of beeps, pings, and endless feed refreshes. I constantly check my phone to make sure I’m not missing anything. But others also pay a price for my so-called “relevance.” When it comes to cultural FOMO, we are eager to turn the tables and heap shame on others for not having yet ingested the movies, television series, or viral stories that we have already consumed. Whenever someone admits that they are behind on these cultural products, we are quick to expose them. “Much as we begrudge being on the receiving end of the guilt, we dish it out in equal portions.”3 Yes, we have blood on our hands—because we both carry and spread this vicious FOMO disease. It feels so good to flaunt our relevance over one another’s irrelevance.

The sick irony is that our FOMO causes us to run right into the “just-having-come-to-be” nature of news, which only stokes our fears about this world. “I think more than ever before Christians are news junkies,” counselor Paul Tripp told me. “More than ever before, through social media and websites and a 24-hour news cycle, we are aware of what is happening around us. And I think for many of us this has raised our fears.”4 Yes, to have smartphones is amazing, but to have the Internet on our phones is to also have immediate access to all of the world’s major tragedies, sorrows, bombings, and acts of terrorism. Are we prepared to carry this burden?

The Birthplace of FOMO

FOMO is neither unique nor modern. It predates the acronym coined in 2004, it predates WiFi, and it predates our smartphones. FOMO is an ancient phobia with a history that reaches back far before we started using our opposable thumbs to text one another gossip. We can say that FOMO is the primeval human fear, the first fear stoked in our hearts when a slithering Serpent spoke softly of a one-time opportunity that proved too good to miss. “Eat from the one forbidden tree, Eve, ‘and you will be like God.’”5

What more could Eve or Adam want—to escape creaturehood, to become their own bosses, to preserve their own independence, to define their own truth, to become all-knowing, and to delight in autonomous regality. They could keep all the glory for themselves by becoming gods and goddesses! Who could refuse the irresistible chance to become godlike in one bite?

These words—this lie!—were loaded with a succulent promise too good to be true. It was false flattery. It was Satan’s attempt to dethrone God by spinning words into an insurrection by God’s own image bearers. In other words, FOMO was Satan’s first tactic to sabotage our relationship with God, and it worked. And it still does.

In other words, FOMO was Satan’s first tactic to sabotage our relationship with God, and it worked.

Behind the first sin was a desire for a “different” life. We can all imagine better lives, yes, and in the words of one novelist, “sometimes I can hear my bones straining under the weight of all of the lives I’m not living.”6 The strain of living just one life is enough, but give yourself time to think about all the other lives you could be living, and the weight of possibilities will press down and lure you to a mirage of escapism just as it did for Adam and Eve. This is FOMO.

But FOMO did not end under a forbidden tree in Eden. It only started there, kindling into a forest fire of FOMO that has never since been extinguished in the human experience. Every day, sinners are still animated by the empty promise of reaching some level of self-sufficiency where God will be finally rendered unnecessary.

Every day, we are faced with the lives that we cannot live, the lives that only others can live, and the lives that God has explicitly forbidden us to live. By insisting that we, God’s creatures, are missing out, the lies of FOMO make us easy targets for advertisers; sharpen the sting of our quarterlife and midlife crises; and sour the elderly years, when the reality of cultural “missing out” becomes most obvious.

FOMO in the Grave

One of the longest-running FOMO object lessons is told by our Savior in Luke 16:19–31, a story of contrasts between eternal loss and eternal glory. The story begins with a rich man (who seems to not be missing out in any social or financial way) and Lazarus, a poor man (who seems to be missing out in every way imaginable). Their contrasts are merely temporary, because both men die and face eternity.

The story of the rich man and Lazarus is the grand story of role reversal. By the end, we find a former rich man (who has lost everything) and a former beggar (who has gained everything). The former rich man now faces eternal torment as a beggar who pleads for a drop of water to cool the agony of judgment. The beggar now finds eternal delight as a redeemed sinner whose regrets and fears have been washed away in the eternal joy of God’s restorative presence.

At this point, the rich man (now the eternal beggar) is missing out (MO), and he fears that his loved ones will, too (FOMO). His urgent plea to Abraham: resurrect the beggar Lazarus and send him back into the world to tell the rich man’s five brothers of eternal life, so that they will hear and believe, and thereby escape this wretched eternal missing out. This is the rich man’s desperate cry.

Jesus makes the moral of the story obvious. Where God’s Word is opened, read, and embraced by the hearer, there is no eternal fear—only the promise of eternal restoration for everything missed out on in this life.

12 Ways Your Phone Is Changing You

Writer Tony Reinke identifies twelve potent ways our smartphones have changed our lives—for good and ill—and calls us to develop healthy habits for life in the digital age.

As this story highlights, one legitimate FOMO cuts through all the other FOMOs of life: the fear of eternally missing out. God’s wrath is real. And apart from Christ, there is only eternal destruction. The wealthy man in Jesus’s parable is a portrait of life’s greatest tragedy—a man filling his pockets, his belly, and his life with vain pleasures. He bought Satan’s old lie to Eve, choosing the foolish path of God ignoring self-sufficiency, and never embraced God as his greatest treasure. He deadened the reality of judgment with the Novocain of self-indulgence, and by it he destroyed himself eternally.

In this condition of unbelief, the rich man faced the agony of the one most dreaded missing out, an eternal missing out, a weeping-and-gnashing-of-teeth missing out. “Therefore, while the promise of entering his rest still stands, let us fear lest any of you should seem to have failed to reach it” (Heb. 4:1). The fear of missing out on eternal life is the one FOMO worth losing sleep over—for ourselves, our friends, our family members, and our neighbors.

But if you are in Christ, the sting of missing out is eternally removed. FOMO-plagued sinners embrace the gospel of Jesus Christ, and he promises us no eternal loss. All that we lose will be found in him. All that we miss will be summed up in him. Eternity will make up for every other pinch and loss that we suffer in this momentary life. The doctrine of heaven proves it. The new creation is the restoration of everything broken by sin in this life; the reparation of everything we lose in this world; the reimbursement of everything we miss out on in our social-media feeds.

Lazarus learned this blessed truth: heaven is God’s eternal response to all of the FOMOs of this life. Heaven will restore every “missing out” thousands of times over throughout all of eternity.7 Therefore, the motto over the allurement of the digital age is set in the slightly altered words of the apostle Paul: I count every real deprivation in my life—and every feared deprivation in my imagination—as no expense in light of never missing out on the surpassing worth of knowing Christ Jesus my Lord for all eternity.8

Be sure to take a look at Crossway's phone usage infographic for more statistics related to the many ways our phones are changing us—for better and for worse.

Tony Reinke is the communications director for desiringGod.org. He is the author of Lit!: A Christian Guide to Reading Books; Newton on the Christian Life; and 12 Ways Your Phone Is Changing You.

12 Ways Your Phone Is Changing You

Within a few years of its unveiling, the smartphone had become part of us, fully integrated into the daily patterns of our lives.

Author Tony Reinke explains how we use digital distractions to escape people, situations, and thoughts that make us uncomfortable.

10 Things You Should Know about Your Smartphone

How much do you really think about your smartphone? Here are 10 things you should know.