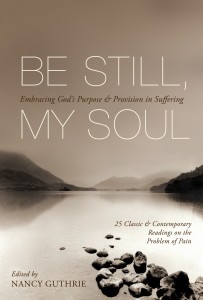 "It is overwhelming to consider the suffering of those in Haiti today and in the days to come—those suffering painful injury with little care available, those sorrowful over the death of someone they love, those suffering the dismal living conditions of Haiti made even worse by the results of the earthquake," expresses Nancy Guthrie. "To suggest that Christ is sovereign over this, and can be a source of comfort to the thousands who are hurting in this seems strange to the world. But it is true."

Guthrie is editor of a new book releasing from Crossway in February, Be Still My Soul: Embracing God's Purpose and Provision in Suffering. Included in this compilation are these thoughts from Jonathan Edwards, never more true or more needed than now:

There is in Christ rest for God’s people, when exercised with afflictions. If a person labour under great bodily weakness, or under some disease that causes frequent and strong pains, such things will tire out so feeble a creature as man. It may to such an one be a comfort and an effectual support to think, that he has a Mediator, who knows by experience what pain is; who by his pain has purchased eternal ease and pleasure for him; and who will make his brief sufferings to work out a far more exceeding delight, to be bestowed when he shall rest from his labours and sorrows.

If a person be brought into great straits as to outward subsistence, and poverty brings abundance of difficulties and extremities; yet it may be a supporting, refreshing consideration to such an one to think, that he has a compassionate Savior, who when upon earth, was so poor that he had nowhere to lay his head, and who became poor to make him rich, and purchased for him durable riches, and will make his poverty work out an exceeding and eternal weight of glory.

If God in his providence calls his people to mourn over lost relations, and if he repeats his stroke and takes away one after another of those that were dear to him; it is a supporting, refreshing consideration to think, that Christ has declared that he will be in stead of all relations unto those who trust in him. They are as his mother, and sister, and brother; he has taken them into a very near relation to himself: and in every other afflictive providence, it is a great comfort to a believing soul to think that he has an intercessor with God, that by him he can have access with confidence to the throne of grace, and that in Christ we have so many great and precious promises, that all things shall work together for good, and shall issue in eternal blessedness. God's people, whenever they are scorched by afflictions as by hot sun-beams, may resort to him, who is a shadow of a great rock, and be effectually sheltered, and sweetly refreshed.

– Jonathan Edwards: Christ is a Sufficient Remedy from Be Still, My Soul: Embracing God's Purpose and Provision in Suffering

Jonathan Edwards (1703–1758) was a pastor, theologian, and missionary. He is generally considered the greatest American theologian. A prolific writer, Edwards is known for his many sermons, including "Sinners in the Hands of an Angry God," and his classic A Treatise Concerning Religious Affections. Edwards was appointed president of the College of New Jersey (later renamed Princeton University) shortly before his death.

When the Darkness Will Not Lift
John Piper