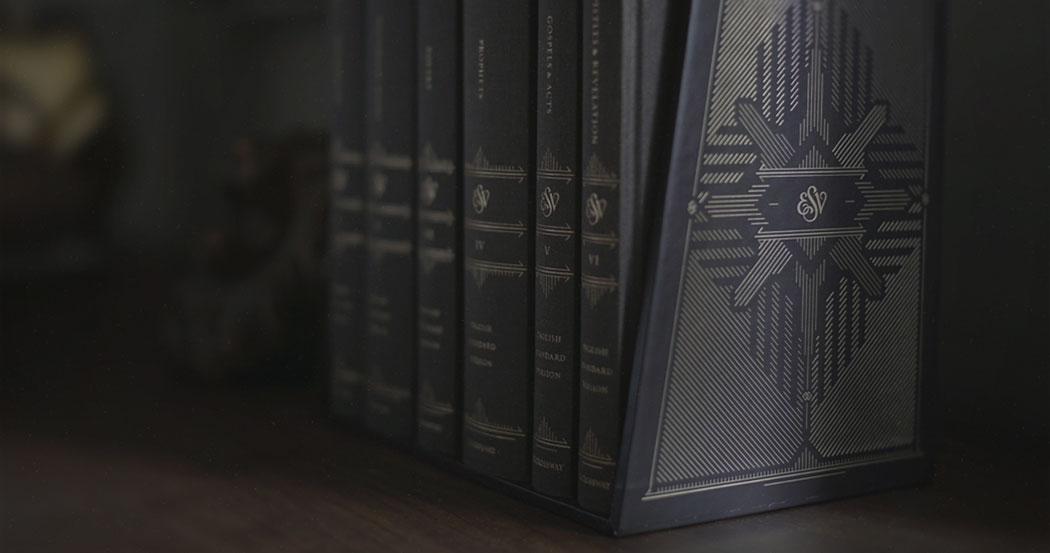 Every detail of the ESV Reader's Bible, Six Volume Set was thoughtfully conceived and carefully implemented by artisans and craftsmen from around the world, together with our passionate team of experts here at Crossway. This is an interview with Erik Maldre, Crossway's art director and the designer behind the permanent slipcase for the ESV Reader's Bible, Six-Volume Set.

What was the inspiration for the design you created for the slipcase?

We wanted the slipcase to function as a thoughtfully beautiful frame around the wonder and glory of God’s Word. It is grounded in God’s redemption story fulfilled by of our Savior Jesus, and so has a christological theme. The eight major components in the featured, central burst reference the Resurrection of Christ; eight being Easter Sunday, the eighth day of Holy Week (which begins on Palm Sunday and ends on Easter Sunday). As a result, Creation is restored into new life through Christ. We live in loving service to our neighbors, a continuous act of our Lord throughout history. The 72 total lines in the burst evoke the 72 sent by Christ into service.

This eternal life of service is echoed in the interaction of the small square pairs framing the burst. Their quadrilateral shape references the four Gospel books of Matthew, Mark, Luke, and John. Two squares in tandem add up to eight lines contributing to the Resurrection narrative. But that’s not all! Two conjoined squares also offer twelve total sides pointing to the Apostles and the twelve tribes of Israel. As the squares combine they form one unified, central square suggesting the one holy, catholic church. Such beauty found in two simple shapes.

Did the materials chosen have any significant meaning?

Certainly the use of gold foil further embraces the Resurrection theme. So much can be said about gold in Christian terms. One joyful consideration is the luminous qualities of gold which point to Christ shedding light upon darkness, bringing glorious sight to our sinful blindness. Such radiance is the central theme in this design as demonstrated in substance (gold) and form (burst element). God’s love pulsates and intensifies around his Word (represented here by the ESV logo). Likewise, the activity of the repeated line forms emanate from the central burst.

The burst also references the Transfiguration of Christ where “his face shone like the sun, and his clothes became white as light” (Matthew 17:2). Here Jesus gave a glimpse of his glory—for our benefit—that will be fully revealed upon his return.

Were there any particular passages of Scripture or biblical figures that informed your design?

The slightly longer lines in the top and bottom of the burst have incarnational undertones. Heaven above and Earth below meet at the Annunciation event. They have arrow-like qualities indicating God's precious Word spoken via his messenger, Gabriel, piercing Mary's receptive ear. Central to that activity is the holy and efficacious Word of God (as represented here by the centrally-located ESV logo). 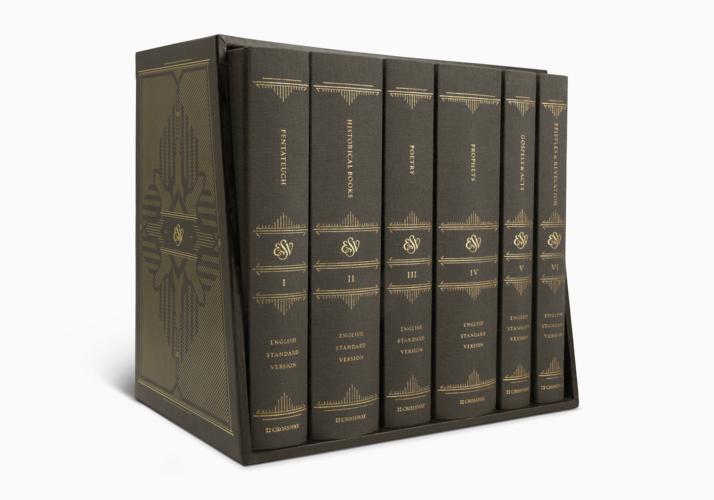 This beautiful, six-volume set printed on European book paper, packaged in an elegant slipcase, and formatted with single-column text is without section headings, verse, and chapter numbers—allowing readers to encounter Scripture as one cohesive narrative.

How do you see the gospel directly represented in this piece?

Within this story is that of the Annunciation, Transfiguration, Resurrection, and the sanctified life in Christ. We'd be remiss not to include the cross where Christ atoned for the sins of the world. That cross is hidden within the revealed resurrection burst. Hidden is God in the humility and shame of the cross. The horizontal bands framing the ESV are binding as Jesus was bound into our sin and into death so that we may have life and receive the blessed exchange.

What do you like most about working with pattern in this way?

There’s an orderly activity in the layering of linear lines grouped in pattern. Elements visually push forward and back in constant motion speaking to the ceaseless efforts of God’s redemptive work sourced in the cross and delivered to us daily through the gifts of his active and loving Word.

Understanding the Big Picture of the Bible
Wayne Grudem, C. John Collins, Thomas R. Schreiner
Crossway is a not-for-profit Christian ministry that exists solely for the purpose of proclaiming the gospel through publishing gospel-centered, Bible-centered content. Learn more or donate today at crossway.org/about.