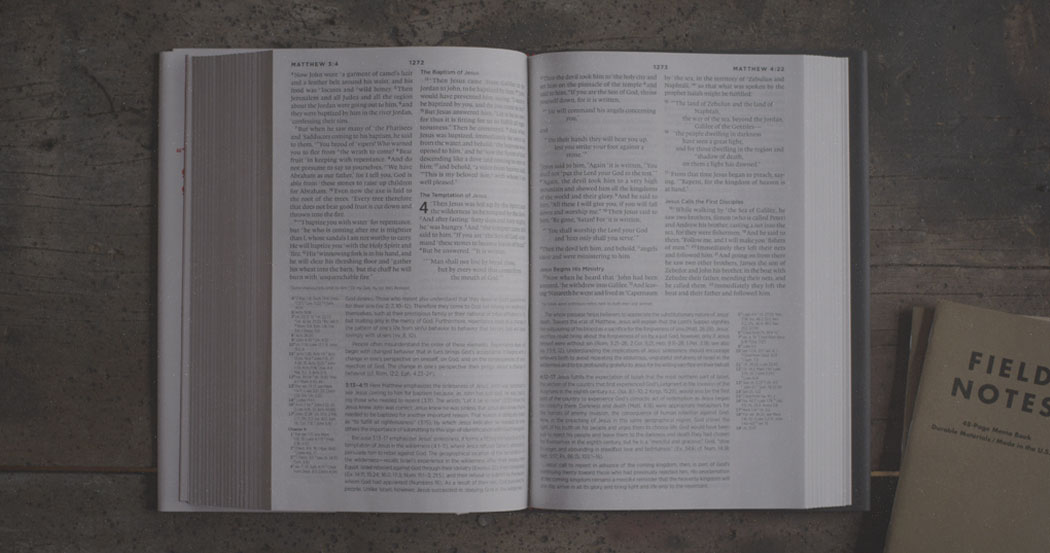 Despite variations in the arrangement of early lists of the New Testament books, Matthew always comes first. Perhaps this is why one famous scholar called Matthew "the most important book ever written." All of the Gospels share certain traits, and all of them have unique features as well. A distinctive feature of Matthew is its arrangement into alternating sections of narrative and discourse. There are five discourse units, inviting comparison with the Pentateuch that starts the Old Testament. Each discourse answers a specific question: How are citizens of Christ's kingdom to live? How are traveling disciples to conduct themselves? What are the parables that Jesus taught? How should Christians conduct themselves in the church? How will it all end? The intervening narrative sections tell the story of Christ's life, death, and resurrection.

The shortest Gospel, and perhaps the basis for Matthew and Luke. Mark is the "action Gospel," with the word immediately appearing some 35 times. The genre is known as the "brief life"—a compilation of the minimum of what a reader wishes to know about a person. As a biography, Luke also fits the category of a documentary life, consisting of brief fragments that record a person's life and from which a biographer might collect data for a fuller account.

The humanitarian Gospel, with much attention to marginalized members of society. The longest Gospel, covering more of Jesus's life than the others. A very literary Gospel, with nearly thirty parables and four nativity hymns, it has exerted the most influence on painters and hymn writers. Despite the variety of material, this Gospel flows beautifully and is easy to read from beginning to end. A famous scholar called it "the most beautiful book ever written."

The poetic Gospel, embodying much of its meaning in great symbols such as light, bread, and water. Another literary aspect is its reliance on longer narrative and discourse units than characterizes the other Gospels. This book is built around seven great signs or miracles that Jesus performed, and these in turn are paired with surrounding discourses that tie into the preceding or following "sign." The unifying plot conflict is between belief and unbelief.

The storyline is accurately captured by the official title—The Acts of the Apostles (chiefly Peter and Paul). Another accurate label is ecclesiastical history (the history of the Christian church in various geographic regions), but with the focus on people and events rather than names and dates. The general framework is narrative, but a surprising three-fourths of the book consists of speeches and orations (including the settings in which they were given).

An important literary consideration for all the epistles is that they are modifications of the standard letter writing conventions of the ancient world. Variations are always possible, but the general paradigm consists of five ingredients: salutation, thanksgiving, body, paraenesis (list of moral exhortations), and close. Additionally, there are more specific epistolary genres that govern most of the epistles. Romans belongs to the genre of the letter essay. Set within the framework of letter-writing conventions, the main content is theological exposition on the subject of sin and salvation. Two styles mingle in Romans: the grand or elevated style and features of a form of vigorous street preaching called the diatribe.

The most important (and usually ignored) feature of the New Testament epistles is that they are occasional letters, not systematic essays. "Occasional" literature is literature written for a specific occasion. Another label by which to name this is the Latin phrase ad hoc ("for the occasion"). The writers of the epistles did not sit down to write an essay; they wrote in response to questions they had been asked or circumstances that needed to be addressed. In 1 Corinthians Paul speaks to problems that existed in a disorderly church.

There are so many references to Paul's own life that this epistle falls into the category of personal letter. Paul defends his reputation against false accusations, thereby placing the letter into a genre known in Latin as an apologia pro vita sua ("defense of his life"). In keeping with a recent approach to literature called "self fashioning," Paul carefully constructs a picture of his missionary life.

A thoroughly polemical (argumentative) letter written in response to a doctrinal crisis that had engulfed Christians living in a specific region (modern-day Turkey). The heresy was a form of Jewish ritualism, but the issue is perennial: whether Christ's atonement is completely sufficient for salvation or whether human works are also necessary ("works righteousness"). Two common designations for this epistle are helpful—"the angry letter" (denoting the polemical tone) and "the freedom letter" (denoting the theological argument of being free from the need to earn salvation by religious rituals).

A circular letter intended for the church universal. A case study in epistolary form: salutation (1:1-1), thanksgiving (1:3-22), body (2:1—4:16), paraenesis or list of exhortations (4:7—6:20), and close (6:21-24). Also characteristic of many New Testament epistles is the division into a doctrinal or theological half and a practical or moral half. Written in a polished and exalted style.

A prison epistle written in Rome. Balancing numerous personal references dealing with Paul's relations to the recipients are famous passages with a universal "feel," such as the Christ hymn that celebrates Christ's taking the form of a servant (2:5-11) and the "whatever is true" list (4:8-9). Philippians is also a missionary update letter.

It is a rare New Testament epistle that does not make reference to doctrinal heresy, but in some epistles, including Colossians, the polemical task of countering heresy is a major part of the letter. Paul only briefly denounces the heresy (which claimed that something more than Christ is needed [2:8-23]), preferring to conduct his debate by declaring that Christ is all that is needed. This epistle is strongly Christocentric, climaxing in the famous Christ hymn that exalts the supremacy of Christ (1:15-20).

An "open letter" intended for a group, but it is so suffused with statements of affection that it reads like a personal letter to an individual. There is a large autobiographical element, and like the letters that we ourselves write and receive, it ranges over a wide variety of topics, including Christ's second coming. A good way to assimilate the letter is to regard it as giving "program notes" on living the Christian life.

Partly a sequel to 1 Thessalonians, arising out of misunderstandings about when Christ would return and the need not to live idly in anticipation of that return. A melodic line in the letter is the need to exert oneself in the Christian faith and "not grow weary in doing good" (3:13). As with other New Testament epistles, we should accept the informal, meandering structure and not attempt to force it into an essay format.

The first of a group known as the pastoral epistles written to individual pastors. 1 Timothy emerges as a manual for church life, with special emphasis on the role and conduct of the pastor.

Paul's last will and testament, written while he was on death row in Rome. While following the usual format of New Testament epistles, it is also dominated by the genre known as the farewell discourse. Merging with that are elements of spiritual autobiography and a defense of the author's life.

A pastoral epistle written to a pastor on the island of Crete, this letter filled with commands is understood to be a general guidebook for living the Christian life in a world where evil seeks to destroy the good. The style is very compressed, reading almost like an outline. There are also directives for church organization.

A single-chapter book known best for the story that lies behind it, namely, a runaway slave who had become a Christian and whom Paul is sending back to his owner (also a Christian) with the letter. The most literary aspect of the book is the delicate persuasion or rhetoric that Paul uses to induce Philemon to receive his slave with kindness.

A letter essay written in an exalted style. This Christocentric book asserts the supremacy of Christ to Old Testament foreshadowings. Christ is successively shown to be superior to prophets and angels (1-2), Moses (3), and the Old Testament priesthood (4-7); then the new covenant in Christ is shown to be superior to the old covenant (chapter 8 and following). A subtext is the need to hold fast to the Christian faith and not revert to Judaism in a time of persecution. Another theme by which we remember the book is faith, climaxed in the famous roll call of faith in chapter 11 (which adheres to the genre known as the encomium). 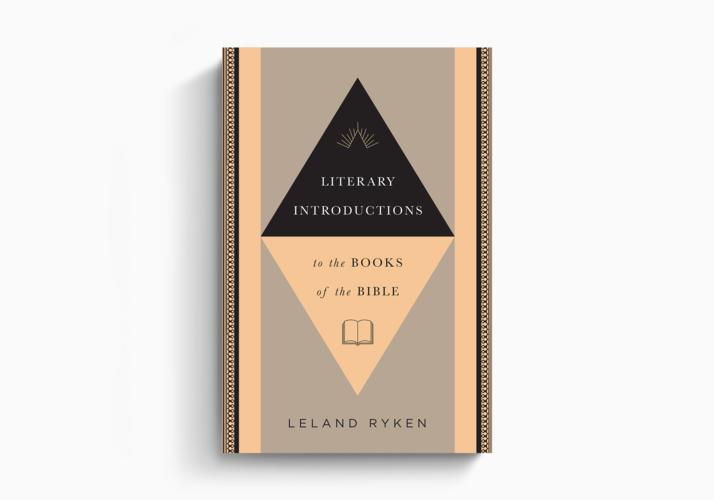 Literary Introductions to the Books of the Bible

In this collection of literary introductions to every book of the Bible, renowned literary scholar Leland Ryken helps readers navigate the genres and literary features found throughout Scripture.

Belongs to the genre of wisdom literature; accordingly, the basic unit is the proverb. The structure is stream of consciousness, not that of a systematic essay. The goal is to impart skill for living, and a good tagline for the book is "faith that works." The Greek form known as diatribe exerts a strong influence.

Another very loosely organized epistle. The general progression is (1) the riches that believers possess in Christ, (2) duties for living the Christian life, and (3) how to endure suffering for the sake of Christ.

An informally arranged reminder of selected foundational truths of the Christian faith. The emphasis on remembering stems from the fact that this letter has affinities with the genre of the farewell discourse. The last chapter is one of the great eschatological discourses of the Bible.

A letter built around the subject of tests by which people can know if they are Christians. An informal letter that yields a long list of separate topics instead of a tidy outline (but that is true of most New Testament letters, contrary to common viewpoint). 1 John resembles our familiar "position paper" or encyclical on a subject that needs clarification.

An abbreviated letter, perhaps because John expected to visit the church soon (v. 14). This epistle is a shorthand version of the customary epistolary conventions. The book falls readily into three parts: a reminder (4-6), a warning (7-9), and an instruction (10-11).

Like the books that precede and follow it, one of five one-chapter books in the Bible. A personal letter addressed to a specific person named Gaius, following the format of salutation, body, and personal greetings. It also fits the genre of the letter of instruction, with one of the topics being hospitality to traveling Christian teachers.

A "fireworks" letter, filled with vivid imagery and anger. The letter displays horror toward apostasy and the false teachers who induce it. The book is primarily a satire (an attack on evil). There is such an abundance of poetic imagery and figurative language that it becomes what literary scholars call poetic prose.

The most literary book in the Bible. The dominant idiom is poetry and symbolism. With that serving as the language in which the book is composed, several overlapping genres converge, including fantasy (unlifelike details used to portray people and events that really exist), visionary writing (the portrayal of realities that are envisioned rather than existing around us right now), prophecy, and apocalypse (literally "unveiling"). The book is structured as an unfolding series of pageants, each comprised of seven units (e.g., seven letters, seven seals, etc.).

What Every Book of the Old Testament Is About

Brief summaries of each book of the Old Testament.