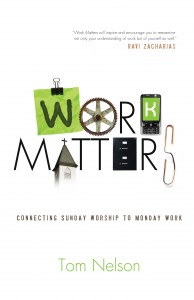 As human beings, we have been designed not only to rest and to play, but also to work. From the very beginning of Scripture we see that the one true God is not a couch potato God, nor did he create a couch potato world. As the Genesis storyline opens, we read, “In the beginning, God created the heavens and the earth.” Here we are immediately introduced to God as a thoughtful and creative worker. At first glance we observe the triune God as an active deity. The Spirit of God is hovering over the waters. God’s infinite creativity, omnipotence, and omniscience are unleashed, and he is intimately engaged in his good creation.

Scripture tells us that the most bedrock answer to the question of why we work is that we were created with work in mind. Being made in God’s image, we have been designed to work, to be fellow workers with God. To be an image-bearer is to be a worker. In our work we are to show off God’s excellence, creativity, and glory to the world. We work because we bear the image of One who works. This is why the apostle Paul writes to a group of first-century followers of Jesus who have embraced the gospel, “If anyone is not willing to work, let him not eat” (2 Thess. 3:10). At first blush, Paul’s rather blunt words seem cold and lacking Christian compassion, but upon further theological reflection, Paul’s words convey to us some needed insight. Paul does not rebuke those who, for various legitimate reasons, cannot work, but he does say that an unwillingness to work is no trivial thing. For anyone to refuse to work is a fundamental violation of God’s creation design for humankind.

For anyone to refuse to work is a fundamental violation of God’s creation design for humankind.

When we grasp what God intended for his image-bearers, it is not surprising that throughout the book of Proverbs the wise are praised for their diligence and the foolish are rebuked for their laziness. When we hear the word fool, we often think of someone who is mentally deficient. However, a foolish person in Scripture is not necessarily one who lacks intelligence but rather one who lives as if God does not exist. The psalmist puts it this way: “The fool says in his heart, ‘There is no God’” (Ps. 14:1). A fool is one who rejects not only the Creator but also creation design, including the design to work. Throughout Scripture slothfulness is rightly viewed in a negative light. A slothful Christian is a contradiction in terms. We should not be shocked to see that the Christian church throughout history has reflected negative sentiments about slothfulness. Sloth finds a prominent place in Pope Gregory the Great’s listing of the seven deadly sins. The Protestant Reformers spoke of the poverty of slothfulness and laziness. Consistently they made the connection that those who spend their time in idleness and ease should rightly doubt the sincerity of their Christian commitment.

God could have placed Adam and Eve in the garden of Eden and made it much like the world of humans in WALL-E, where they could sit around with food coming to them, sipping their life-giving nutrients out of giant cups. This was not God’s desire or his design for his good world. Because God himself is a worker, and because we are his image-bearers, we were designed to reflect who God is in, through, and by our work. The work we are called to do every day is an important part of our image-bearing nature and stewardship. As human beings we were created to do things. In this sense we are not only human beings, we are also human doings. We have been created to contribute to God’s good world.

This article is adapted from Work Matters, by Tom Nelson.

Tom Nelson (DMin, Trinity Evangelical Divinity School) has served as senior pastor of Christ Community Church in Leawood, Kansas, for more than twenty years. He is the author of Five Smooth Stones and Ekklesia as well as a member of The Gospel Coalition.