Truth Endures: Landmark Sermons from Forty Years of Unleashing God's Truth One Verse at a Time 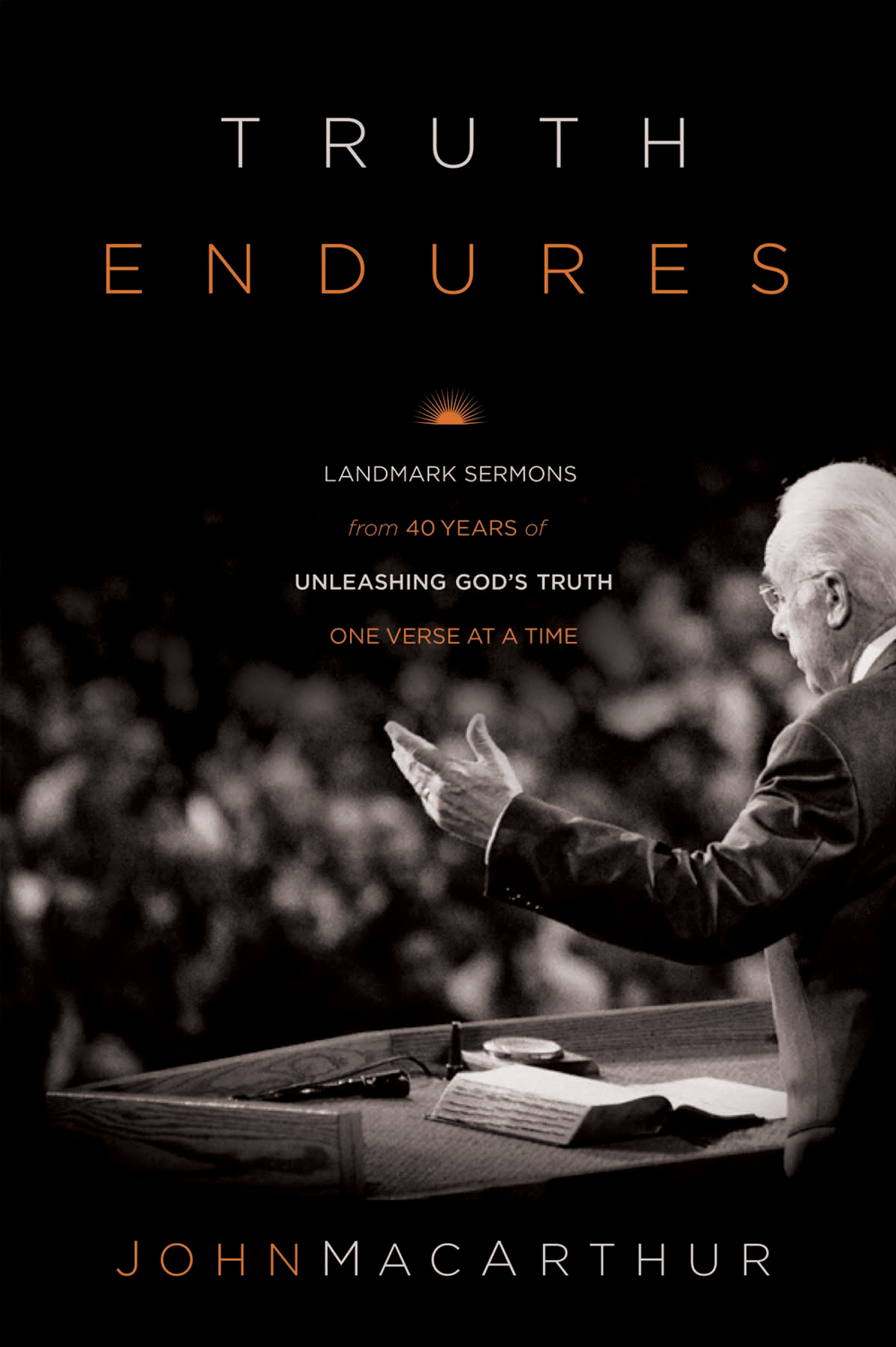 Truth Endures: Landmark Sermons from Forty Years of Unleashing God's Truth One Verse at a Time

John MacArthur is known worldwide for his teaching ministry and best-selling writing. For more than four decades, his work has been characterized by one important, unwavering emphasis: careful, verse-by-verse exposition of the Bible.

Truth Endures commemorates that lifelong focus by bringing together twelve of MacArthur’s classic sermons, including “The Simple Gospel,” “The Purpose of Trials,” “Jesus’ Death Shows Us How to Live,” and “Making Hard Decisions.” MacArthur’s veteran years of ministry experience shine through in each Bible-centered sermon.

Forty years in the making, Truth Endures is a landmark volume that will be prized by MacArthur readers everywhere.

“For the thirty years I’ve studied under John MacArthur’s preaching, he has always taken great pains to give the historical and scriptural context behind each verse, reminding the believer that every noun and verb in the Bible is inspired by the Holy Spirit to call us to a holy and obedient life. It’s what makes John’s sermons so timeless and enduring. And I'm excited that this collection in Truth Endures includes some of his best work!”
Joni Eareckson Tada, Founder, Joni and Friends

“John MacArthur clearly has a love affair with sacred Scripture. He understands that what the Bible says, God says. He submits his mind and his will to the truth of the Bible. Not concerned with echoing clichés on biblical texts, John digs deeply—deep into the original languages—deep into the text itself—and then expounds with clarity and courage what he finds in the text. He has no interest in novelty or self-aggrandizement. His passion is fidelity. . . fidelity to Christ. . . fidelity to the Word of God.”
R. C. Sproul, Founder, Ligonier Ministries

“John MacArthur has set the benchmark for diligent study, careful exegesis, and faithful exposition and all of us are encouraged by his example.”
Alistair Begg, Senior Pastor, Parkside Church, Chagrin Falls, Ohio

“Revered as ‘the Spurgeon of our day,’ John MacArthur is arguably the foremost expositor of this generation—the modern day ‘prince of preachers’ and no less than ‘America’s pastor.’ With a profound ability to grasp the biblical text and convey its essential meaning, the sheer genius of MacArthur’s preaching lies in his mastery of the Scripture combined with his rare capacity to communicate it with great clarity and convincing power. In this one volume, there has been gathered a treasure house of expository gems, the very best of his pulpit excellence at Grace Community Church. These are the very mountain peak sermons from over four decades of lofty ministry. Without question, MacArthur’s faithful exposition of the Scripture has towered over this present hour of church history. Not since the days of Martyn Lloyd-Jones has one man held such a world pulpit and provided doctrinal shape to the greater evangelical body of thought. Herein is Bible exposition at its finest—God-glorifying, Christ-centered, Spirit-empowered, sin-exposing, grace-imparting, soul-saving, heart-awakening, joy-giving, life-changing, and eternity-altering!”
Steven J. Lawson, President, OnePassion Ministries; Professor of Preaching, The Master’s Seminary; Teaching Fellow, Ligonier Ministries

“Those, like myself, who have followed and benefited from John MacArthur’s long expository ministry, know that it flows from his unflinching commitment to the sovereign authority of the text—and that it is the preacher’s job to get out of the way and let the Word do the work. And because of John’s extraordinary commitment, he has enriched all of us and has been a sure prophetic voice to, and for, the Church. These expositions are not only Landmark Sermons, but touchstones for all who would faithfully preach God’s inerrant Word!”
R. Kent Hughes, Senior Pastor Emeritus, College Church, Wheaton, Illinois