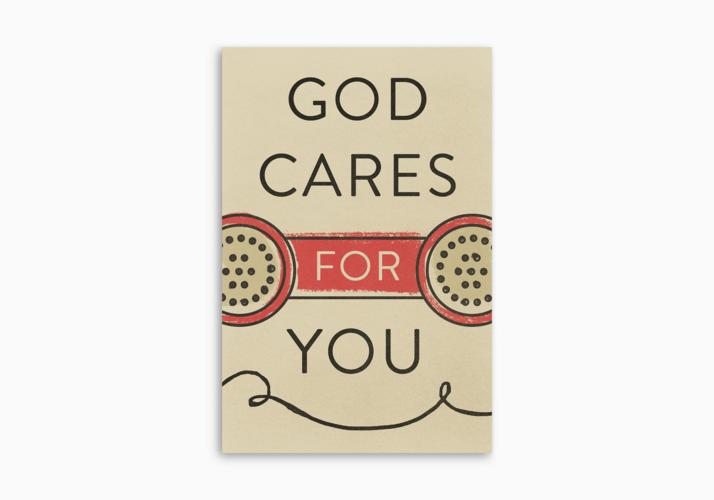 God Cares for You

When Christ humbled himself to take the form of a man and come to earth, he revealed the majesty of God's love.

Few experiences reveal our own selfishness more than parenting. I found that to be true as the father of four children. To be perfectly frank, when our kids were little, there was a side of me that liked to have my shoes shined rather than stepped on and scuffed up. I preferred having my clothes hanging in the closet in an orderly manner rather than drooled on and wrinkled. And milk is best in a glass, on the table, not on the floor!

So what did the Lord do to assist me in realizing my selfishness? Very simple: he gave me four wonderful, busy kids who stepped on shoes, wrinkled clothes, and spilled milk along with other things!

But Jesus presents a different model. It was our Lord’s unselfishness that launched him from the splendor of heaven to a humble manger in Bethlehem. Don’t miss the steps downward, according to Philippians 2:5–8 in the Bible:

He emptied himself by taking on the form of a servant.

“Who, though he was in the form of God, did not count equality with God as a thing

to be grasped, but emptied himself, by taking the form of a servant…”

He was made in the likeness of humanity.

“…being born in the likeness of men. And being found in human form…”

He humbled himself by becoming obedient unto death.

“…he humbled himself and became obedient to the point of death,“

He accepted the most painful and humiliating way to die—crucifixion.

Everything involved in Jesus’ becoming human began with an attitude of meekness, a willingness to cooperate with the plan for salvation. Rather than lobbying for his right to remain in heaven and continuing to enjoy the exalted position as the second member of the Godhead, he willingly said yes to being “God with us.” For the Word to become flesh and dwell among us meant his cooperating with a plan that would require his releasing majesty and accepting agony.

In a state of absolute perfection and undiminished deity, he willingly came to earth. Leaving the angelic host who flooded his presence with adoration, Jesus accepted a role that would require him to be misunderstood, abused, cursed, tortured, and ultimately crucified.

Why would the Son of God willingly submit to die in such a way? Because something has gone terribly wrong in our society and in ourselves. Sin colors all our thoughts, motives, words, and actions. And the Bible says, “The wages of sin is death” (Romans 6:23)—our physical death through sin’s destructiveness, and our spiritual death from God’s righteous judgment of our sin.

We can’t live a good enough life to make up for our sins, because God’s standard isn’t “good enough”—it’s perfection. So God in mercy rescued us by sending His Son, Jesus, to die on the cross for our sins. He took death for you! “For our sake, God] made [Jesus] to be sin who knew no sin, so that in him we might become the righteousness of God” (2 Corinthians 5:21). His death satisfied God’s righteous demands. His resurrection three days later confirmed that his Father had accepted the payment in full.

For me, becoming a parent meant giving up perfectly polished shoes. For Christ, leaving heaven meant the One who used the earth as his footstool stooped to wash dirty feet. I endured wrinkled clothes; He endured soldiers gambling for his cloak. I gave up milk in the glass; he welcomed the bitter cup of shame and death on the cross. God’s ways are not our ways—the humility required for the Word to become flesh is unfathomable!

To receive the benefit of Christ’s death, you must respond in total faith and confidence in him to save you: “Whoever believes in him is not condemned….for by grace you have been saved through faith; and this is not your own doing, it is the gift of God” (John 3:18, Ephesians 2:8).

You can accept God’s gift of salvation by putting your faith in Christ alone for the forgiveness of your sins. If you would like to enter into that relationship with your Creator by trusting in Christ as your Savior, you can express your decision in a prayer like this:

“Dear God, I know that my sin has put a barrier between you and me. Thank you for sending your Son, Jesus, to die in my place. I trust in Jesus alone to forgive my sins, and I accept your gift of eternal life. I ask Jesus to be my personal Savior. Thank you. Amen.”