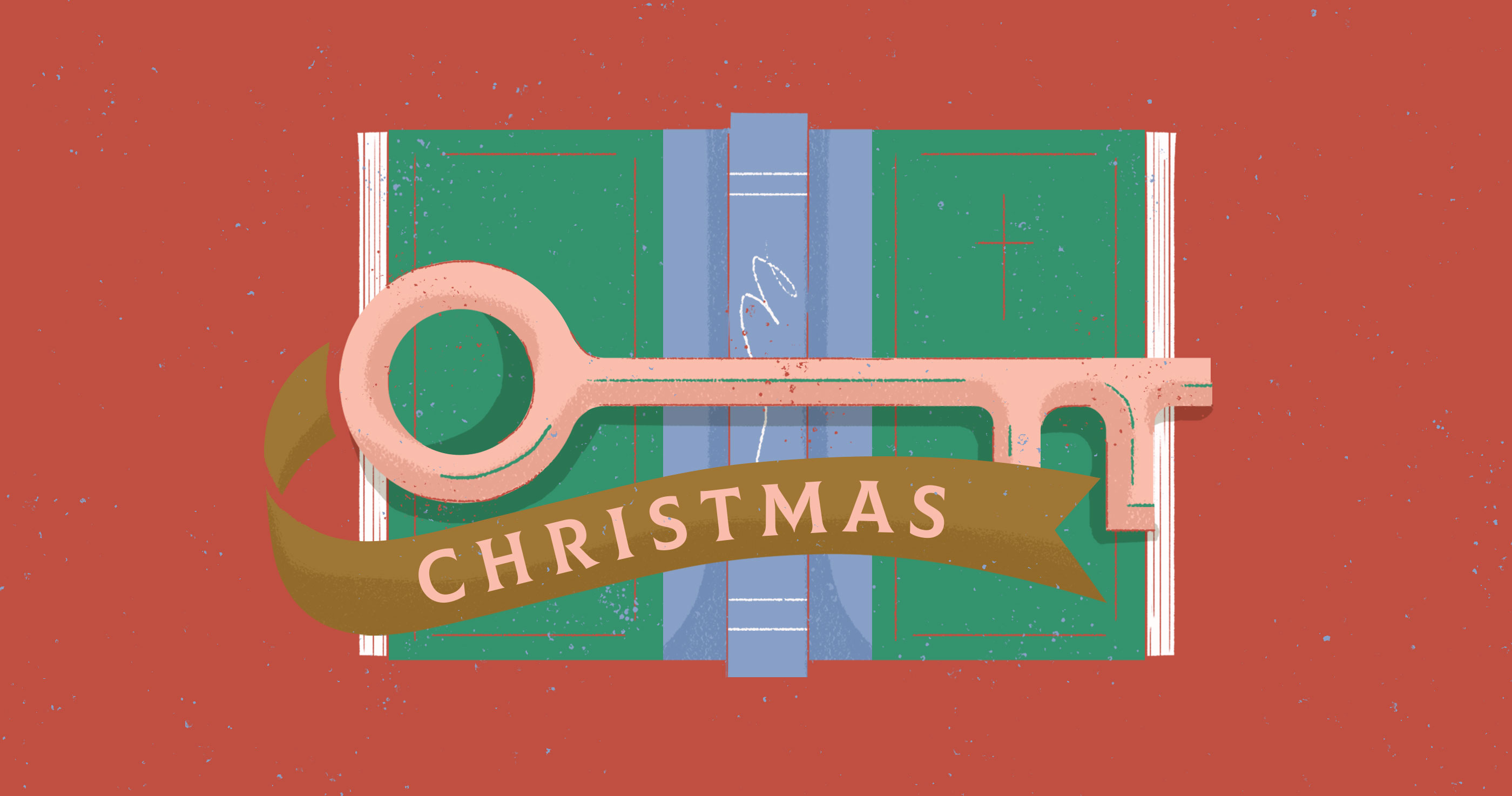 Read these familiar passages about God’s plan manifested through Christ in these verses and commentary adapted from the ESV Study Bible, and let your heart be awed by God’s perfect plan to redeem his people.

But you, O Bethlehem Ephrathah,
who are too little to be among the clans of Judah,
from you shall come forth for me
one who is to be ruler in Israel,
whose coming forth is from of old,
from ancient days.

These words signal renewed kingship. Ephrathah is the name of the district in which Bethlehem is located and David was born (1 Sam. 17:12). too little. The unlikely choice of David as king foreshadows the unlikely choice of Bethlehem as the hometown of the greater David. Matthew 2:6 (combining this with Mic. 5:4) shows that Jewish scholars of Jesus’ day read this as a prediction of the Messiah’s birthplace (cf. John 7:42). The Messiah’s reign is at God’s behest (for me), and his coming forth (or “origins”; plural of Hebrew, motsa’ah, “coming out”) is from of old, from ancient days. This has been taken to indicate either an ancient (Davidic) lineage or eternal (and therefore divine) origin of the predicted Messiah. The first time-related expression (“from of old”; Hebrew, miqqedem) generally refers to ancient historical times (e.g., Neh. 12:46; Ps. 77:5, 11; 78:2; 143:5; Isa. 45:21; 46:10) but can also refer to eternity past (e.g., Ps. 74:12; Hab. 1:12). The second time-related expression (“from ancient days”; Hebrew, mime ‘olam), however, refers to ancient historical times both in Micah (7:14; cf. 7:20) and elsewhere (Deut. 32:7; Isa. 63:9, 11; Amos 9:11; Mal. 3:4); thus this text is referring to the Messiah’s ancient Davidic lineage, confirming that the ancient covenantal promises made to David still stand.

The true light, which gives light to everyone, was coming into the world. He was in the world, and the world was made through him, yet the world did not know him.

The Johannine “witness” theme, in turn, is part of the larger “trial motif,” according to which it was not Jesus who was put on trial and condemned by the world but rather the world that was put on trial by Jesus. In order to demonstrate Jesus’ innocence and the world’s guilt, John parades before the reader a multitude of witnesses who bear testimony to Jesus’ true messianic identity and hence establish the world’s guilt in rejecting Jesus.

She will bear a son, and you shall call his name Jesus, for he will save his people from their sins.

A new era in Israel’s history begins with the story of Jesus’ conception in the little town of Nazareth. The angel announces his conception (Matt. 1:18–21), explaining that he is the prophesied Immanuel (Matt. 1:22–23). Joseph immediately obeys the angel’s directive (Matt. 1:24–25).

The name Jesus was given to sons as a symbolic hope for the Lord’s anticipated sending of salvation through a Messiah who would purify his people and save them from oppression. But the angel points to a more important theme: to save his people from their sins. Salvation from sins was a repeated promise in Old Testament prophets (e.g., Isa. 40:2; Isa. 53:6; Jer. 31:31–34; Ezek. 36:25–27; Dan. 9:24; Zech. 13:1).

In the sixth month the angel Gabriel was sent from God to a city of Galilee named Nazareth, to a virgin betrothed to a man whose name was Joseph, of the house of David. And the virgin’s name was Mary. And he came to her and said, “Greetings, O favored one, the Lord is with you!” But she was greatly troubled at the saying, and tried to discern what sort of greeting this might be. And the angel said to her, “Do not be afraid, Mary, for you have found favor with God. And behold, you will conceive in your womb and bear a son, and you shall call his name Jesus. He will be great and will be called the Son of the Most High. And the Lord God will give to him the throne of his father David, and he will reign over the house of Jacob forever, and of his kingdom there will be no end.”

“Most High” is a name for the true God that comes from Genesis 14:18–22, where Melchizedek, king of Salem, identifies Yahweh as “God Most High” (cf. Balaam [also a Gentile], Num. 24:16: “the Most High”; “the Almighty”). It became a common title for the Lord among the monotheistic Israelites, especially in the Psalms. (In Dan. 3:26; 4:24, 34 it is the title for God that both Daniel and Nebuchadnezzar hold in common, and is a favored name in the intertestamental book of Sirach.) Whereas John is the “prophet of the Most High” (Luke 1:76), Jesus is the “Son of the Most High.” He is the promised successor to the throne of David (see 2 Sam. 7:12–13, 16).

And the angel said to them, “Fear not, for behold, I bring you good news of great joy that will be for all the people. For unto you is born this day in the city of David a Savior, who is Christ the Lord. And this will be a sign for you: you will find a baby wrapped in swaddling cloths and lying in a manger.”

I bring you good news is Greek euangelizomai, the verbal form of “gospel.” great joy. Luke 1:14.

A Savior, who is Christ the Lord: these three titles reveal the greatness of Mary’s son. For “Savior,” cf. Luke 1:69; Acts 5:31; Acts 13:23. “Christ” is Greek for the Hebrew “Messiah.” It is a title rather than a name (cf. “the Christ,” Acts 5:42; 17:3). The astonishing announcement, probably not fully grasped by the shepherds, is that this Messiah who has been born as a baby is also the Lord God himself.

And his mercy is for those who fear him
from generation to generation.
He has shown strength with his arm;
he has scattered the proud in the thoughts of their hearts;
he has brought down the mighty from their thrones
and exalted those of humble estate;

Mary’s hymn of praise moves from Mary to what her son’s birth means for believing Israelites. Reverent, humble obedience that seeks to please God. The second ground for Mary’s praise is introduced by He has shown strength with his arm, an anthropomorphism for God’s might. Luke’s use of the aorist tense expresses Mary’s certainty of what God will do. To Abraham and to his offspring emphasizes the fulfillment of salvation history.

In him was life, and the life was the light of men. The light shines in the darkness, and the darkness has not overcome it.

And she gave birth to her firstborn son and wrapped him in swaddling cloths and laid him in a manger, because there was no place for them in the inn.

The greatest miracle in the history of the world, the eternal Son of God being born as a man, happens quietly in a stable in an obscure village in Judea. Luke’s description is restrained, giving only a very few details.

In ancient times strips of cloth were used to wrap babies to keep them warm and secure. manger. A feeding trough for animals. The inn, with the definite article (“the”), indicates that this was a specific, publicly known lodging place for individual travelers and caravans. The inn was full, since many had come to Bethlehem to register for the census.

And going into the house, they saw the child with Mary his mother, and they fell down and worshiped him. Then, opening their treasures, they offered him gifts, gold and frankincense and myrrh.

The wise men did not arrive at the time of Jesus’ birth in a manger, but up to two years later, when Jesus was living in a house. It is doubtful that these quasi-pagan religious men understood Jesus’ divine nature, but their actions were unknowingly appropriate and wonderfully foreshadowed the worship of Jesus by all the Gentile nations (cf. Matt. 28:19; Rom. 1:5; Phil. 2:9–11; Rev. 7:9–10; 21:24). The number of gifts contributed to the tradition that there were three men, but the actual number is unknown. Frankincense is resin used ceremonially for the only incense permitted on the altar (Ex. 30:9, 34–38). Myrrh is sap used in incense and perfume and as a stimulant tonic. The gifts were likely used providentially to support the family in their flight to Egypt (Matt. 2:13–15).

“Glory to God in the highest,
and on earth peace among those with whom he is pleased!”

The angels proclaim the news about Jesus: the eternal, omnipotent Son of God has just taken “the form of a servant, being born in the likeness of men” (Phil. 2:7), for “the fullness of time” has now come, and God has “sent forth his Son, born of woman, born under the law, to redeem those who were under the law” (Gal. 4:4–5). peace. The peace of salvation that God gives through his Son. Jesus is the “Prince of Peace” prophesied by Isaiah (Isa. 9:6). among those with whom he is pleased. God’s gift of “peace” will come not to all humanity but to those whom God is pleased to call to himself.