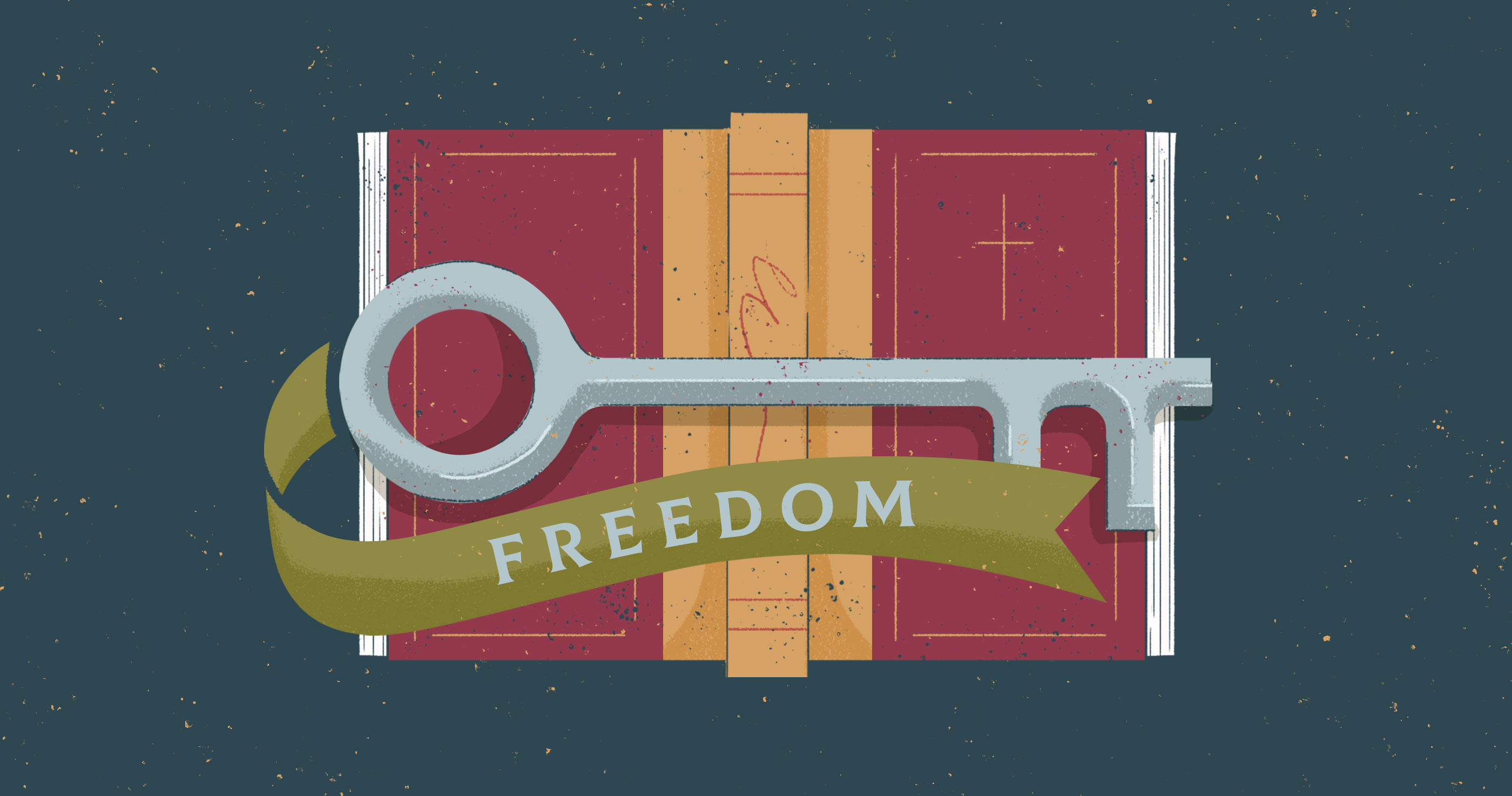 Now you, brothers, like Isaac, are children of promise. But just as at that time he who was born according to the flesh persecuted him who was born according to the Spirit, so also it is now. But what does the Scripture say? “Cast out the slave woman and her son, for the son of the slave woman shall not inherit with the son of the free woman.” So, brothers, we are not children of the slave but of the free woman. For freedom Christ has set us free; stand firm therefore, and do not submit again to a yoke of slavery. Read More

In a way analogous to Isaac’s miraculous birth, the Galatians have become God’s children by an act of God’s gracious and miraculous power, not by human effort.

Just as Ishmael persecuted Isaac (not explicitly mentioned in the Old Testament, but suggested by Gen. 21:9), so now the Jews who seek justification by human effort are persecuting Christians who trust God’s promise of justification by faith. In Genesis 16:4, when Hagar conceived, “she looked with contempt on her mistress.” This too is mirrored in the fact that now non-Christian and pseudo-Christian Jews are persecuting Christians like Paul (as seen in Gal. 6:17). History is repeating itself.

“Cast out the slave woman and her son”, and, by implication, all those represented by them in this allegory, i.e., those who seek justification through their own efforts. This implies that those who teach the false gospel of justification by works should not be allowed to remain and teach in a church that follows Christ.

Those who turn to the law for salvation will cut themselves off from salvation. Hence Paul warns and encourages his readers not to defect. Christ has set us free from Jewish ceremonial laws and regulations (see note on 2:11–12) but not from obedience to God’s moral standards (Gal. 5:14–6:1).

The quotation marks around this phrase, both here and in 10:23, have been supplied to indicate that it is probably a commonly used slogan among the Corinthians. “Food . . . for the stomach” is probably another Corinthian slogan. The Corinthians have adopted from the culture around them the idea that the body is permitted to have everything that it craves. Paul knows that human desires are tainted with sin, which uses these desires to master the person for its own evil purposes (Rom. 6:6, 12, 16–22; 7:7–25).

So Jesus said to the Jews who had believed him, “If you abide in my word, you are truly my disciples, and you will know the truth, and the truth will set you free.” They answered him, “We are offspring of Abraham and have never been enslaved to anyone. How is it that you say, ‘You will become free’?”Jesus answered them, “Truly, truly, I say to you, everyone who practices sin is a slave to sin. The slave does not remain in the house forever; the son remains forever. So if the Son sets you free, you will be free indeed. Read More

Their “belief” is shown to be false in the course of the story (see John 8:33–47). To abide in Jesus’ word means to continue believing what Jesus has said and walking in obedience to him. This verse shows that continuing to trust Jesus and obey him is one test of who are truly my disciples.

John 8:32 is frequently quoted out of context, but the connection with John 8:31 shows that Jesus is only talking about one way to know the truth, and that is by continuing to believe and obey his word. set you free. From the guilt and enslaving power of sinful patterns of conduct.

“A slave to sin” means unable to escape from sinful patterns of conduct without the help of Jesus to set a person free (see John 8:36).

“Sets you free” means from both the guilt and the life-controlling power of sin (and probably also from the accompanying influence of demonic activity, as Jesus mentions in John 8:44).

Different explanations have been offered for this difficult and compressed statement: Paul may be saying that Christ and the Spirit function together in the Christian’s experience—i.e., that the Lord (Christ) comes to us through the ministry of the Spirit (though they are still two distinct persons).

Another view (based on the reference in 2 Cor.3:16 to Ex. 34:34, “Moses went in before the LORD to speak with him”) is that the “Lord” here refers to Yahweh (“the LORD”) in the Old Testament (that is, God in his whole being without specifying Father, Son, or Spirit). In this case, Paul is saying that Yahweh in the OT is not just Father and Son, he is also Spirit.

In either case, Paul’s primary point seems to be that the Christian’s experience of the ministry of the Spirit under the new covenant (2 Cor. 3:3–8) is parallel to Moses’ experience of the Lord under the old covenant—i.e., that the Spirit (under the new covenant) sets one free from the veil of hard-heartedness (2 Cor. 3:12–15). Paul regularly distinguishes Christ from the Holy Spirit in his writings, and that is surely the case even here, since later in this verse he speaks of the Spirit of the Lord. Moreover, it should not be supposed that Paul is teaching that any of the members of the Trinity (the Father, the Son, or the Spirit) are the same person, which would be the heresy of modalism; instead Paul is stressing the gracious unity of purpose among the three persons of the Trinity. “There is freedom”, though unspecified in the context, most likely refers to the many kinds of freedom that come with salvation in Christ and with the presence of the Holy Spirit: that is, freedom from condemnation, guilt, sin, death, the old covenant, and blindness to the gospel, as well as freedom that gives access to the loving presence of God.

Live as people who are free, not using your freedom as a cover-up for evil, but living as servants of God. Honor everyone. Love the brotherhood. Fear God. Honor the emperor. Read More

Freedom in Scripture is not a license to sin but expresses itself in devotion to what is good (cf. Gal. 5:13–14). All people deserve the same honor and respect as the emperor. Only God is to be feared. Believers should have a tender love for each other as members of the same family.

The Spirit of the Lord GOD is upon me,
because the LORD has anointed me
to bring good news to the poor;
he has sent me to bind up the brokenhearted,
to proclaim liberty to the captives,
and the opening of the prison to those who are bound. Read More

The Messiah will preach into existence his new, liberated people, who will pray into existence his new, redeemed world. This looks back to Isaiah 48:16, and thus the speaker is the messianic servant, who creates a new people by his Spirit-empowered preaching (Isa. 11:2; Isa. 59:21). Isaiah explains the goal of Messiah’s anointing with seven purpose clauses. See Isaiah 11:4; Isaiah 29:19; Matthew 5:3.

Moral decisions still matter for Christians. Giving in to sin results in people increasingly becoming obedient slaves to sin. This kind of activity eventually leads to death, not implying that genuine believers can actually lose their salvation but that sinning leads them in that direction, away from full enjoyment of life with Christ. Those who give themselves utterly to sin will die (face eternal punishment).

True Christians, however, will never live as slaves to sin, for God has transformed their hearts at conversion, so that they will now grow in their love of righteousness and in living according to God’s Word.

There is therefore now no condemnation for those who are in Christ Jesus. For the law of the Spirit of life has set you free in Christ Jesus from the law of sin and death. For God has done what the law, weakened by the flesh, could not do. By sending his own Son in the likeness of sinful flesh and for sin, he condemned sin in the flesh, in order that the righteous requirement of the law might be fulfilled in us, who walk not according to the flesh but according to the Spirit. Read More

There is “no condemnation” for the Christian because God has condemned sin in the flesh by sending his own Son (Rom. 8:3) to pay the penalty for sin through his death on the cross. The following verses then show that indwelling sin is overcome through the power of the indwelling Spirit, with ten references to the Spirit in Romans 8: 4–11.

The evidence that believers are in Christ is that the power of sin has been broken in their lives by the work of the Holy Spirit. “Law” in both instances means principle. The law (in this instance, the Mosaic law) could not solve humanity’s problem because sin employs the law for its own purposes, as Romans 7 explained. God sent his Son as a sacrifice for sin (an idiomatic phrase designating a sin offering) and paid the full penalty for sin in his sacrifice (condemned sin). “In the flesh” refers to Christ’s body, and in the likeness of sinful flesh means that Jesus became fully human, even though he was sinless.

Verse 4 could mean the requirement is fulfilled in the new life that Christians live on the basis of Christ’s work, or it may refer to the full penalty of the law being met at the cross.

Let it be known to you therefore, brothers, that through this man forgiveness of sins is proclaimed to you, and by him everyone who believes is freed from everything from which you could not be freed by the law of Moses. Read More

The Greek (dikaioō) is often translated “justified” and means “to declare innocent, to justify.” Jews sought to deal with their sin through living by the law of Moses. But the law cannot free a person from sin, not only because all people fail to keep it but also because it was never designed to bring about effective atonement for sins (Gal. 3:10–14; Heb. 10:1–14); only the one who believes in Christ and his saving sacrifice is free from sin and acceptable to God.

For you were called to freedom, brothers. Only do not use your freedom as an opportunity for the flesh, but through love serve one another. For the whole law is fulfilled in one word: “You shall love your neighbor as yourself.” Read More

Far from the Christian life being enslaving, it is the only way to resist the various slaveries offered by the world. But this does not mean that Christians can do whatever they feel like doing (which itself is just another form of slavery). Rather, serving and loving others is the route to escaping bondage and fulfilling the ultimate content of the law.

Verse 13 refers to freedom from Mosaic laws, as represented by circumcision. Opportunity for the flesh means “opportunity to follow your fallen, sinful desires and act contrary to God’s moral laws.