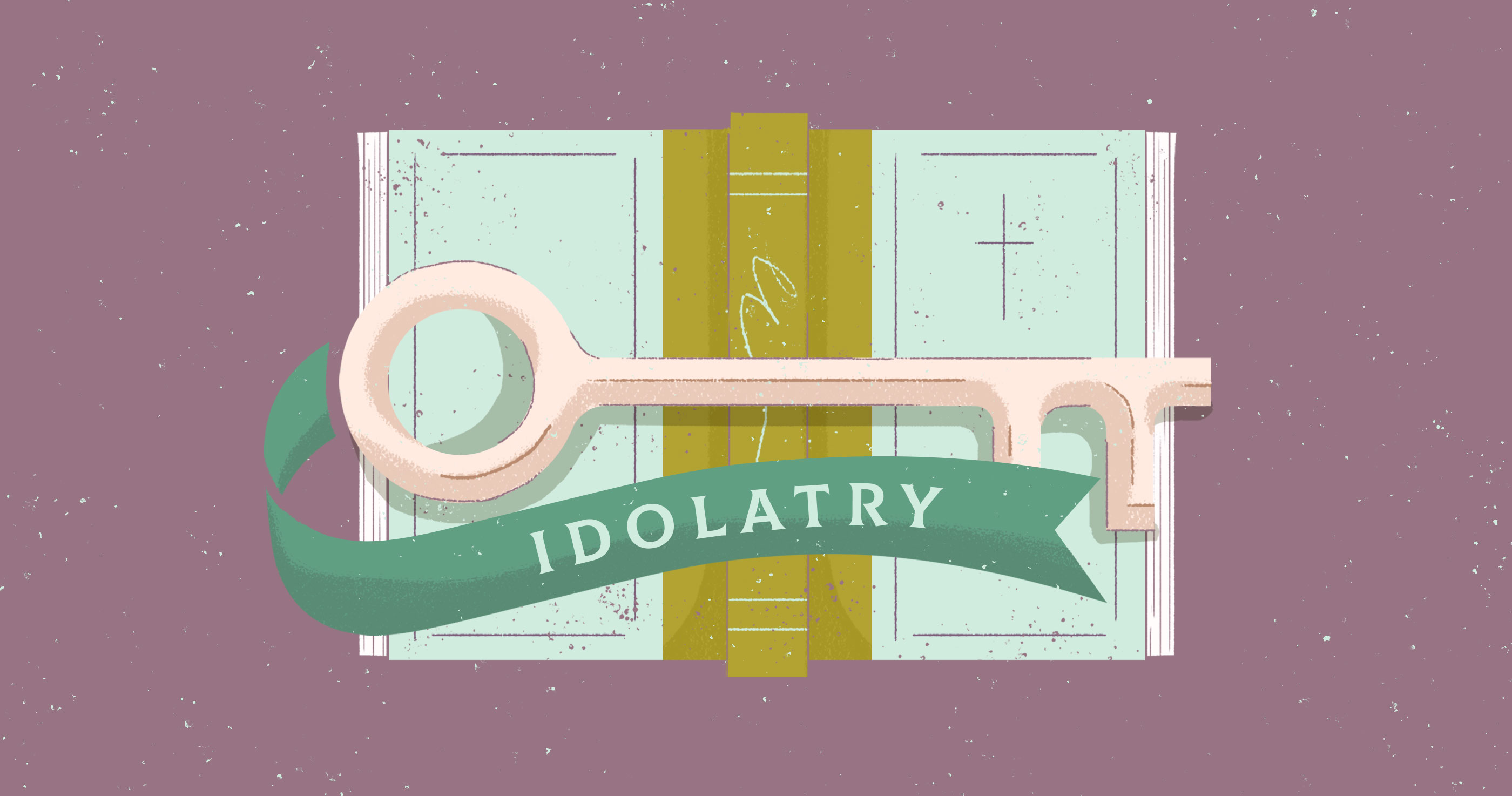 All commentary notes adapted from the ESV Study Bible.

You shall have no other gods before me. You shall not make for yourself a carved image, or any likeness of anything that is in heaven above, or that is in the earth beneath, or that is in the water under the earth. You shall not bow down to them or serve them, for I the LORD your God am a jealous God, visiting the iniquity of the fathers on the children to the third and the fourth generation of those who hate me, but showing steadfast love to thousands of those who love me and keep my commandments. Read More

You shall not make for yourself a carved image. The gods of both Egypt and Canaan were often associated with some aspect of creation and worshiped as, or through, an object that represented them. The Lord has made it clear, through the plagues and the exodus, that he has power over every aspect of creation because the whole earth is his (Ex. 9:29; Ex. 19:5), and thus he commands Israel to refrain from crafting an image of anything in heaven or earth for worship (Ex. 20:4–5a). The prohibition is grounded in the fact that the Lord is a jealous God (see Ex. 34:14; Deut. 6:15), and that the Lord has no physical form, and should not be thought to be localized in one (Deut. 4:15–20). Israel saw what happened to Egypt when Pharaoh refused to acknowledge what was being revealed about the Lord; here Israel is warned against doing the same, while also being reassured that their God is merciful and gracious (see Ex. 34:6–7).

Most NT letters contain final words of warning in their closing lines. Keep yourselves from idols means keep yourselves from trusting, obeying, revering, and following—that is, in effect, worshiping—anyone or anything other than God himself, and his Son Jesus Christ.

For although they knew God, they did not honor him as God or give thanks to him, but they became futile in their thinking, and their foolish hearts were darkened. Claiming to be wise, they became fools, and exchanged the glory of the immortal God for images resembling mortal man and birds and animals and creeping things. Read More

The root sin is the failure to value God above all things, so that he is not honored and praised as he should be. Human beings are foolish, not in the sense that they are intellectually deficient but in their rejection of God’s lordship over their lives. They knew God not in a saving sense, but they knew of his existence and his attributes.

Idolatry is the fundamental sin. images. In addition to the images housed in great temples, Roman families commonly kept representations of individual “house gods” in their homes (examples found at Pompeii are particularly striking). Mediterranean and Near Eastern pagan religion worshiped idols in the form of beasts, or in the likeness of mixed beast/human deities such as the ancient gods of Egypt. Modern “idols” don’t look like ancient ones; images served today are often mental rather than metal. But people still devote their lives to, and trust in, many things other than God.

Those who pay regard to vain idols
forsake their hope of steadfast love.
But I with the voice of thanksgiving
will sacrifice to you;
what I have vowed I will pay.
Salvation belongs to the LORD! Read More

Those who pay regard to vain idols refers to the pagan sailors, who prayed each to his own god (Jonah 1:5), but it is also a message to Jonah’s idolatrous fellow Israelites. Ironically, these sailors ended up experiencing God’s steadfast love, while Jonah ended up in the sea. Sacrifice . . . vowed recalls the actions of the sailors (Jonah 1:16), whom Jonah is now like. Salvation belongs to the LORD is Jonah’s confession that God is the sovereign source of salvation, though the rest of the story will show that Jonah believes God is free to save any, as long as they are “us” and not “them” (see Jonah 4:1–4).

What profit is an idol
when its maker has shaped it,
a metal image, a teacher of lies?
For its maker trusts in his own creation
when he makes speechless idols! Read More

idols. Carved images or likenesses of false gods were often condemned as worthless and lifeless objects unworthy of the faith placed in them (cf. Isa. 41:29; 44:9; Jer. 10:15). teacher of lies. This highlights the deceptive nature of worshiping idols (cf. Isa. 44:20).

Formerly, when you did not know God, you were enslaved to those that by nature are not gods. But now that you have come to know God, or rather to be known by God, how can you turn back again to the weak and worthless elementary principles of the world, whose slaves you want to be once more? Read More

Passing from Idolatry to the True God. The slavery that the Galatians are in danger of embracing again is not just a matter of forfeiting sonship but of abandoning the true God. They would be returning to false gods (Gal. 4:8), to worldly principles and structures (Gal. 4:9–10). It would be as if they had never even heard the gospel from Paul (Gal. 4:11). For these Gentile Galatian Christians, turning to the Jewish law would be like returning to their paganism.

Those that by nature are not gods refers to the demonic spirits that controlled the Galatians’ former religious practice (cf. 1 Cor. 10:20). To know God . . . to be known by God implies a personal relationship with God.

The ironsmith takes a cutting tool and works it over the coals. He fashions it with hammers and works it with his strong arm. He becomes hungry, and his strength fails; he drinks no water and is faint. The carpenter stretches a line; he marks it out with a pencil. He shapes it with planes and marks it with a compass. He shapes it into the figure of a man, with the beauty of a man, to dwell in a house. He cuts down cedars, or he chooses a cypress tree or an oak and lets it grow strong among the trees of the forest. He plants a cedar and the rain nourishes it. Then it becomes fuel for a man. He takes a part of it and warms himself; he kindles a fire and bakes bread. Also he makes a god and worships it; he makes it an idol and falls down before it. Half of it he burns in the fire. Over the half he eats meat; he roasts it and is satisfied. Also he warms himself and says, “Aha, I am warm, I have seen the fire!” And the rest of it he makes into a god, his idol, and falls down to it and worships it. He prays to it and says, “Deliver me, for you are my god!”

They know not, nor do they discern, for he has shut their eyes, so that they cannot see, and their hearts, so that they cannot understand. No one considers, nor is there knowledge or discernment to say, “Half of it I burned in the fire; I also baked bread on its coals; I roasted meat and have eaten. And shall I make the rest of it an abomination? Shall I fall down before a block of wood?” He feeds on ashes; a deluded heart has led him astray, and he cannot deliver himself or say, “Is there not a lie in my right hand?” Read More

Works of the flesh means actions flowing out of fallen human nature and its desires. Apart from the transforming work of the Holy Spirit, these are the actions toward which sinful humans instinctively gravitate.

idolatry, sorcery. These are evidences of a desire to be in touch with the spiritual realm through humanly invented means: they supposedly have God as their ultimate object, but they reject the revealed way in which he should be worshiped. Because Christ is “the way, and the truth, and the life” (John 14:6), all other ways to God are false. enmity, strife, etc. When people reject God, they turn in on themselves, and so relationships between human beings are destroyed as well.

Envy comes about when people are not content with what God has given them, longing instead for what he has given others. Drunkenness and orgies are examples of how people misuse God’s good gifts in destructive and sinful ways, in rebellion against God as the gracious giver of all good things. In the OT, wine was associated with joy and celebration (e.g., Neh. 8:10; Ps. 104:15; see note on John 2:3) but when abused was seen as being highly destructive (Prov. 20:1; 21:17; 23:29–35), and drunkenness is consistently condemned throughout Scripture (e.g., Eph. 5:18). Sex is a precious gift for husband and wife, but when abused it also has highly destructive consequences for all involved (1 Cor. 6:18). those who do such things. The present participle (Gk. prassontes, translated here as “do”) refers to those who “make a practice of doing” such things, as a pattern of life. Their outward conduct indicates their inward spiritual status: that they are not born of God, do not have the Holy Spirit within, and are not God’s true children.

Therefore . . . flee from idolatry. This is the point toward which Paul has been moving throughout ch. 10. The Corinthians cannot participate in idolatry and then think that they will receive eternal life on the last day.