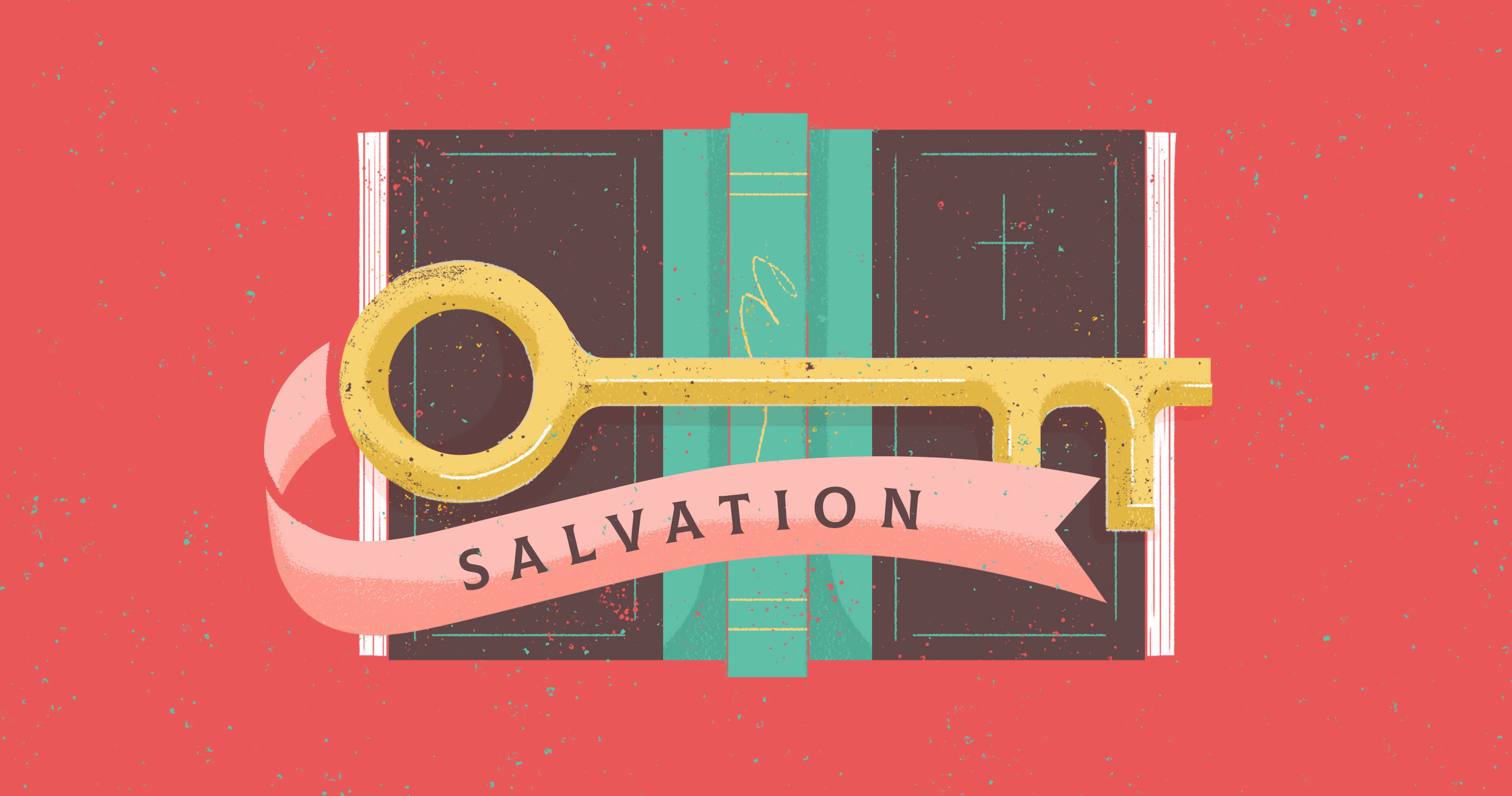 For the wages of sin is death, but the free gift of God is eternal life in Christ Jesus our Lord. Read More

Those who give themselves to sin will die both physically and eternally, whereas Christians are assured of eternal life. Wages implies that the punishment for sin is what one has earned and what one deserves. Free gift is the opposite of something one deserves, which fits Paul’s earlier emphasis on justification by grace alone, through faith alone (trusting in Christ for justification; see Rom. 1:17; Rom. 3:21–4:25).

Therefore, my beloved, as you have always obeyed, so now, not only as in my presence but much more in my absence, work out your own salvation with fear and trembling, for it is God who works in you, both to will and to work for his good pleasure. Read More

The Philippians have obeyed (cf. Christ’s obedience, Phil. 2:8) in the past and should continue to do so as they work out their salvation with fear and trembling. They cannot be content with past glories but need to demonstrate their faith day by day as they nurture their relationship with God. But while God’s justice is a cause for sober living (“fear and trembling”), it is not as though Paul wants the Philippians to be anxious that they can never be good enough to merit God’s favor. Rather, it is God’s love and enabling grace that will see them through: it is God who works in you. They can rejoice in God’s empowering presence even as they work hard at living responsible Christian lives. While Philippians 2:12 may seem to suggest salvation by works, it is clear that Paul rejects any such teaching (cf. Phil 3:2–11). In Philippians 2:12 Paul means “salvation” in terms of progressively coming to experience all of the aspects and blessings of salvation. The Philippians’ continued obedience is an inherent part of “working out” their salvation in this sense. But as Philippians 2:13 demonstrates, these works are the result of God’s work within his people. both to will and to work for his good pleasure. Even the desire (“to will”) to do what is good comes from God; but he also works in the believer to generate actual choices of the good, so that the desires result in actions.

Jesus said to him, “I am the way, and the truth, and the life. No one comes to the Father except through me.” Read More

For I am not ashamed of the gospel, for it is the power of God for salvation to everyone who believes, to the Jew first and also to the Greek. Read More

Paul explains why he is so eager to preach the gospel everywhere: the gospel is the saving power of God, in which the righteousness of God is revealed.

Because of their lack of size, fame, or honor in the Roman corridors of power and influence, Christians might be tempted to be ashamed of the Christian message. But Paul says it is nothing to be ashamed of, for it is in fact a message coming with the power of God that brings people to salvation. “Jew” first indicates the priority of the Jews in salvation history and their election as God’s people. The role of the Jews is a major issue in Romans, as seen especially in the discussion in Romans chs. 9–11. Greek is not limited here to people from Greece but refers to all Gentiles.

“Receive him” implies not merely intellectual agreement with some facts about Jesus but also welcoming and submitting to him in a personal relationship. “Believed in” (Gk. pisteuō eis) implies personal trust. “His name” refers to all that is true about him, and therefore the totality of his person. “Born, not of blood . . . , but of God” makes clear that neither physical birth nor ethnic descent nor human effort can make people children of God, but only God’s supernatural work (John 8:41–47; cf. John 3:16). This extends the possibility of becoming God’s children to Gentiles and not just Jews (John 11:51–52; cf. John 10:16). See also John 3:3–8. “To all . . . who believed . . . he gave the right” indicates that saving faith precedes becoming members of God’s family through adoption as his children.

In him you also, when you heard the word of truth, the gospel of your salvation, and believed in him, were sealed with the promised Holy Spirit, who is the guarantee of our inheritance until we acquire possession of it, to the praise of his glory. Read More

“Sealed” can mean either that the Holy Spirit protects and preserves Christians until they reach their inheritance (see Eph. 4:30; 2 Cor. 1:22; 1 Pet. 1:5; Rev. 7:2–3) or that he “certifies” the authenticity of their acceptance by God as being genuine—they bear the “royal seal” (see John 3:33; Acts 10:44, 47). The first interpretation seems best here, though both ideas are biblically true.

God pours out his Holy Spirit on all of his children to guarantee (or to provide a “down payment” on) their share in his eternal kingdom because he applies to them all God’s powerful working in redemption. “until we acquire possession of it.” This phrase can also be rendered “until God redeems his possession.” In that case it means that, like the Levites in the Old Testament, believers are the Lord’s specially treasured possession (see Num. 3:12, 45; Num. 8:14; Josh. 14:3–4; 18:7).

For God so loved the world, that he gave his only Son, that whoever believes in him should not perish but have eternal life. For God did not send his Son into the world to condemn the world, but in order that the world might be saved through him. Whoever believes in him is not condemned, but whoever does not believe is condemned already, because he has not believed in the name of the only Son of God. Read More

Here is the most famous summary of the gospel in the entire Bible. “For” connects to v. 15 and explains what happened to make it possible that someone can “have eternal life” (John 3:15), that is, through believing in Christ. God so loved the world was an astounding statement in that context because the Old Testament and other Jewish writings had spoken only of God’s love for his people Israel. God’s love for “the world” made it possible for “whoever” (John 3:15) believes in Christ, not Jews alone, to have eternal life. God’s love for the world was not mere sentiment but led to a specific action: he gave his only Son, which John elsewhere explains as sending him to earth as a man (John 3:17) to suffer and die and thereby to bear the penalty for sins. The purpose of giving his Son was to make God’s great gift of eternal life available to anyone—to whoever believes in him, that is, whoever personally trusts in him. “Not perish” means not perish in eternal judgment, in contrast to having eternal life, the life of abundant joy and immeasurable blessing in the presence of God forever. Those who “believe in” Christ have that “eternal life” and already experience its blessings in this present time, not yet fully, but in some significant measure.

Those who do not believe and trust in Christ have neither a positive nor a neutral standing before God. They stand condemned already before God for their sins because they have not trusted God’s solution for guilt, the only Son of God. This verse also refutes the assertion that a sincere person following any religion can have eternal life with God (cf. John 14:6; Acts 4:12; Rom. 10:13–17; 1 Tim. 2:5–6; regarding Old Testament believers who looked forward to Christ, see John 8:56; Rom. 4:1–24; Heb. 11:13, 26).

For the grace of God has appeared, bringing salvation for all people, training us to renounce ungodliness and worldly passions, and to live self-controlled, upright, and godly lives in the present age, waiting for our blessed hope, the appearing of the glory of our great God and Savior Jesus Christ, who gave himself for us to redeem us from all lawlessness and to purify for himself a people for his own possession who are zealous for good works. Read More

Christians should live this way because (“for”) the grace of God that saves also instructs its recipients to live in a new way. One cannot truly claim to be a recipient of saving grace without also being a pupil of “training grace.” This change in lifestyle is rooted in the atonement (Titus 2:14) and the expectation of Christ’s return (Titus 2:13).

“Bringing salvation” for all people is sometimes misunderstood as meaning that all people will be saved. However, such a reading is not necessary here and flatly contradicts other Scripture. It means, rather, that salvation has been offered to all people (including all ethnic groups), not just to some.

Saving grace teaches its recipients to say no to sin and yes to godliness. In the present age stresses that this godliness is to be lived out in the here and now. It also sets up the reference to the future return of Christ (Titus 2:13). Certainty about the future enables constancy in the present.

The Greek for waiting (prosdechomai) often carries a connotation of eagerness. Eagerly expecting the return of Christ is the way grace trains Christians to renounce sin and live in a godly way (see Titus 2:11–12). Setting one’s mind on the truth of Christ’s return impels a person to holiness (see 1 John 3:2–3). Our blessed hope means Christ’s second coming, which Paul calls the appearing of . . . our great God and Savior Jesus Christ. It may seem unclear whether Paul refers here to two persons of the Godhead (God the Father and Jesus Christ) or whether he describes Jesus as God and Savior. The Greek grammar, however, is well reflected in this translation and indicates that Jesus is being identified as “our great God and Savior” (cf. John 1:1; 20:28; etc.).

Paul anchors his call for godliness in the fact that one purpose of Jesus’ death was to make his people holy. To forsake godliness is to despise the sacrifice of Christ. Paul roots this in the Old Testament with the phrase to redeem us from all lawlessness, which in Greek closely resembles the Septuagint of Ps. 130:8. A people for his own possession translates an unusual phrase (Gk. laon periousion) with intentional echoes from the Old Testament (see esp. Ex. 19:5; Mal. 3:17). It has the sense of “prized, treasured possession.” These people are to be zealous for good works, so again redemption is tied specifically to living in a godly manner. There is no room for claiming to be redeemed while providing no evidence of practical transformation (see James 2:14–26).

For God has not destined us for wrath, but to obtain salvation through our Lord Jesus Christ, who died for us so that whether we are awake or asleep we might live with him. Read More

“Awake” alludes to the concern of the living Christians regarding their destiny on the day of the Lord (1 Thessalonians 5:1–11), while “asleep” alludes to the destiny of deceased Christians (1 Thess. 4:13–18). At the second coming, Christians will experience a new quality of life in the company of Christ.