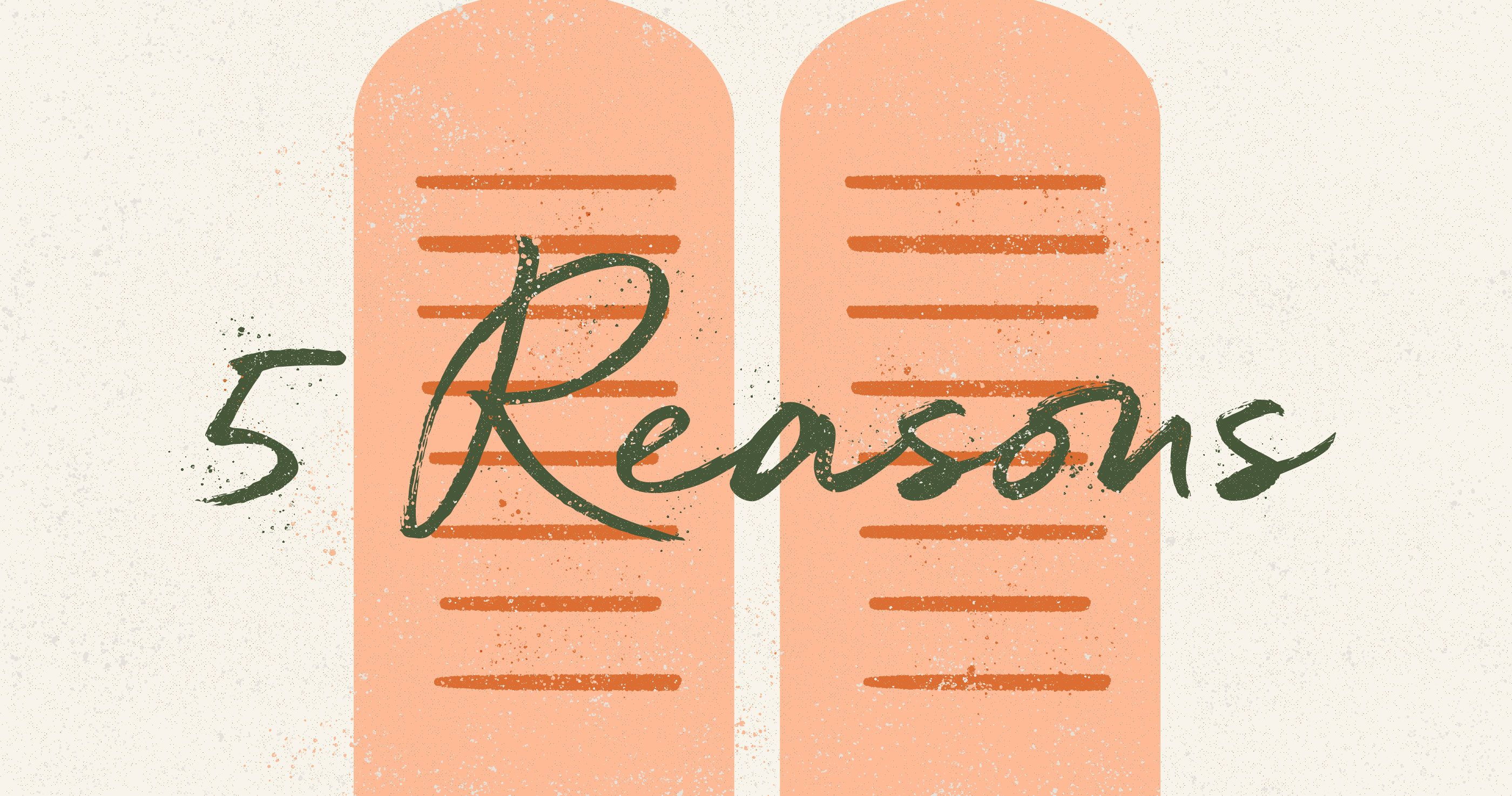 The Ten Commandments are not to be ignored. It’s important that we study and understand them. But, of course, it’s more important that we obey them. God isn’t impressed by an intellectually careful analysis that puts the Decalogue at the center of Christian discipleship. He expects disciples to actually follow these commands.

But for the right reasons. Working hard to obey the Ten Commandments from the wrong motivation and for the wrong end is a surefire way to live out our relationship with God in the wrong way. God gave the commandments that they might be obeyed—not to earn salvation but because of who we are, who God is in himself, who he is to us, where we are, and what he has done.

Reason 1: Who We Are

Don’t miss the obvious: Exodus 19 comes before Exodus 20. God has already identified the Israelites as “a kingdom of priests and a holy nation” (Ex. 19:6). They are a people set apart. The same is true of us. As Christians, we too are a kingdom of priests and a holy nation (1 Pet. 2:9). We must be prepared to stand alone, to look different, and to have rules the world doesn’t understand. Of course, we aren’t always the holy people we should be, but that’s what he has called us to be. That’s who we are. We are God’s people, set apart to live according to God’s ways.

Reason 2: Who God Is in Himself

The opening verses in Exodus 20 are not just filler before the commandments start rolling. They establish who God is and why we should obey him. In verse 2 God reveals himself again as “the Lord,” that is, as Yahweh their covenant-keeping God. This is the God who spoke to Moses in the burning bush. This is the God who said, “I am who I am” (Ex. 3:14). This is the sovereign, self-existent, self-sufficient, almighty creator God. This is the God of the plagues and the Red Sea and the manna in the wilderness. This is not a God to be trifled with. If there is a God, and if he is anything like the God who is revealed to us in the Scriptures, then it would be extremely presumptuous, foolish, and (by all accounts) dangerous for us to crowdsource our own ethical code.

The law is an expression of the Lawgiver’s heart and character. We must think about that before we say, “I don’t care for laws,” or before we bristle at the thought of do’s and don’ts. The commandments not only show us what God wants; they show us what God is like. They say something about his honor, his worth, and his majesty. They tell us what matters to God. We can’t disdain the law without disrespecting the Lawgiver.

We are God’s people, set apart to live according to God’s ways.

The God of the Ten Commandments is revealed not just as the Lord, but as the “Lord your God” (Ex. 20:2). We are his treasured possession (Ex. 19:5; 1 Pet. 2:9). This God of absolute power is not a capricious tyrant, not some cranky deity who wields raw and unbridled authority without any regard for his creatures. He is a personal God, and in Christ he always is for us (Rom. 8:31). It would be frightening to the point of death if God thundered from the heavens, “I am the Lord!” But the divine self-disclosure doesn’t stop there. He goes on to add, “. . . your God.” He is on our side. He is our Father. He gives us commands for our good.

Reason 4: Where We Are

The biblical definition of freedom is not “doing whatever you want.” Freedom is enjoying the benefits of doing what we should. We too often think of the Ten Commandments as constraining us—as if God’s ways will keep us in servitude and from realizing our dreams and reaching our potential. We forget that God means to give us abundant life (John 10:10) and true freedom (John 8:32). His laws, 1 John 5:3 tells us, are not burdensome.

You think it’s burdensome to have Ten Commandments? Do you know how many laws there are in the United States? It’s a trick question, because no one knows! There are twenty thousand laws on the books regulating gun ownership alone. In 2010 an estimated forty thousand new laws were added at various levels throughout the country. The United States Code, which is just one accounting of federal laws and does not include regulatory statutes, has more than fifty volumes. In 2008 a House committee asked the Congressional Research Service to calculate the number of criminal offenses in federal law. They responded, five years later, that they lacked the manpower and resources to answer such a question.1

God is not trying to crush us with red tape and regulations. The Ten Commandments are not prison bars, but traffic laws. Maybe there are some anarchists out there who think, “The world would be a better place without any traffic laws.” A few of us drive as if that were so! But even if you get impatient when you’re at a red light, try to zoom through the yellow, and turn left on a very stale pink—overall, aren’t you glad that there is some semblance of law and order? People stop and go. People slow down when driving by schools. They stop for school buses. You wouldn’t be able to drive your car to the grocery store without laws. When you drive on a switchback on a mountain pass, do you curse the guardrails that keep you from plunging to an untimely death? No, someone put them there at great expense, and for our good, that we may travel about freely and safely.

The Ten Commandments are not instructions on how to get out of Egypt. They are rules for a free people to stay free.

This article is adapted from The 10 Commandments: What They Mean, Why They Matter, and Why We Should Obey Them by Kevin DeYoung.

What Does It Really Mean to Take the Lord’s Name in Vain?

The Old Testament identifies several ways in which the third commandment can be violated.

There have been three items that have formed the backbone of the church’s catechesis: the Apostle’s Creed, the Lord’s Prayer, and the Ten Commandments.

Are Love and Authority Mutually Exclusive?

But authority in creation and authority and redemption actually work together—for good.