I am sure that Pontius Pilate thought this was a stinging insult to the Jewish people whom he despised. For him the inscription was a cruel joke: this miserable victim was their king! We are told that the Jewish chief priests (understandably) repudiated the suggestion (John 19:21). For them the inscription was an offensive lie. However Pilate had unwittingly proclaimed the truth. The frail and fading man on the cross, about to breathe his last, was indeed “The King of the Jews.” Furthermore Pilate had unconsciously intimated the significance of this declaration for the whole world by putting his unintentionally prophetic message in the languages of the known world—Aramaic, Latin and Greek (John 19:20).

The message of “Jesus Christ and him crucified” (1 Cor. 2:2) is the greatest paradox in the history of the world. It defies all human wisdom. It is also the most profound, powerful and important truth in the world: it is “the power of God and the wisdom of God” (1 Cor. 1:24). The man who died on the cross is the Savior of the world.

The crucified one was obviously unlike any king the world has known. In his own words, “My kingdom is not of [or from] this world” (John 18:36). His reign would certainly impact this world, but not in the usual ways of this worldly political power.

The man who died on the cross is the Savior of the world.

Pontius Pilate did not understand this, nor did the Jewish religious leaders who had delivered Jesus to the Roman authority and pressed for his execution. On an earlier occasion, in the context of similar failure to understand him, Jesus had said to the Jews who took offence at him:

“You search the Scriptures because you think that in them you have eternal life; and it is they that bear witness about me . . .” (John 5:39)

“The Scriptures . . . that bear witness about me” (we call them the Old Testament) also illuminate the inscription that was placed over Jesus as he hung on the cross. These Scriptures “bear witness” to Jesus because they promise a king of the Jews1 who will be the Savior of the world (cf. John 4:42)!2

It is difficult to overstate the significance of this promise. According to the promise, this king will bring to fulfillment God’s wonderful purposes for his whole creation (see, for example, Isa. 11:1–9). These purposes are summed up at the beginning of the Old Testament in the word “blessing” (see Gen. 1:22, 28; 2:3). God’s promise to Abraham, very early in the Old Testament story, was that “blessing” will reach “all the families of the earth” through Abraham and his “offspring” (see Gen. 12:1–3, 7; 13:15, 16; 15:5; 17:7, 8). The Old Testament then records the history of God’s faithfulness to this promise. The “offspring” of Abraham became the nation of Israel—by New Testament times called “the Jews.”3 In the course of this history God’s promise was repeatedly reaffirmed in ways that clarified its terms. In particular, the promise came to focus on a king (see Gen. 35:11; 49:10; 1 Sam. 2:10) whose kingdom God will establish “forever” (2 Sam. 7:16). 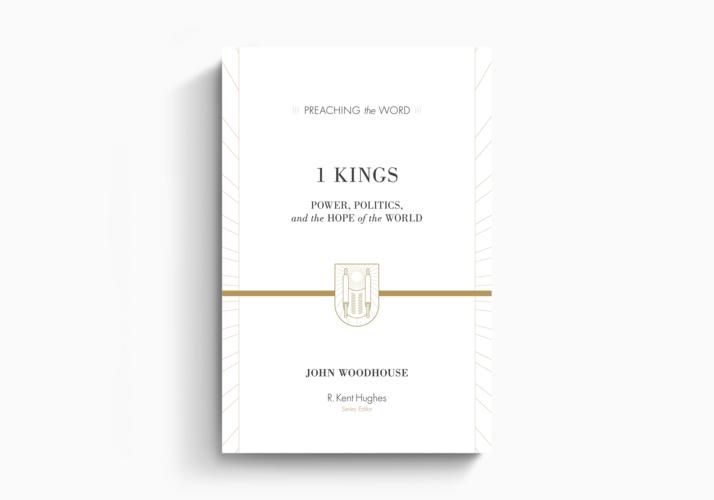 This commentary, written by an experienced Bible expositor, helps modern readers, especially pastors and Bible teachers, understand and apply the message of 1 Kings to their own lives. Part of the Preaching the Word commentary series.

The notice on the cross of Jesus, if we see it in the light of these Scriptures, is breathtaking: “JESUS OF NAZARETH, THE KING OF THE JEWS.” The one who died on that cross, despised and rejected by his own people (John 1:11), was the one who had been promised in these Scriptures. He is the hope of the world.

The book of 1 Kings tells the story of fourteen “kings of the Jews,” framed by King Solomon (chapters 1–11), arguably the greatest of them all, and King Ahab (16:29–22:40), certainly the worst of them all (so far). It is a story of power and politics in which we will learn many interesting and important things. By far the most important is the wonder of the extraordinary inscription that Pontius Pilate put on the cross—when seen in the light of these Scriptures. The story of these kings will (as Jesus put it) “bear witness about me.” Our task is to listen carefully to this testimony.

This article is adapted from 1 Kings: Power, Politics, and the Hope of the World by John Woodhouse.

John Woodhouse (DPhil, Victoria University of Manchester) served as principal of Moore Theological College in Sydney, Australia, from 2002 to 2013. Previously, he worked in pastoral ministry in a suburb of Sydney. He has published articles in various academic journals and is the author of three volumes in Crossway’s Preaching the Word commentary series.

Infographic: The Story of Redemption

As inspiring and wonderful as stories can be, the Bible—with all its twists and turns, ups and downs—is greater than any other because it tells what actually is.

Glimpsing the Gospel in Every Book of the Bible

Biblical literacy is ever-important for Christians as we seek to understand how the Scriptures come together to tell the story of the gospel.

The Most Epic Tale of All

It is no exaggeration to say that the Bible is the most sweeping and engrossing and enthralling epic ever written.