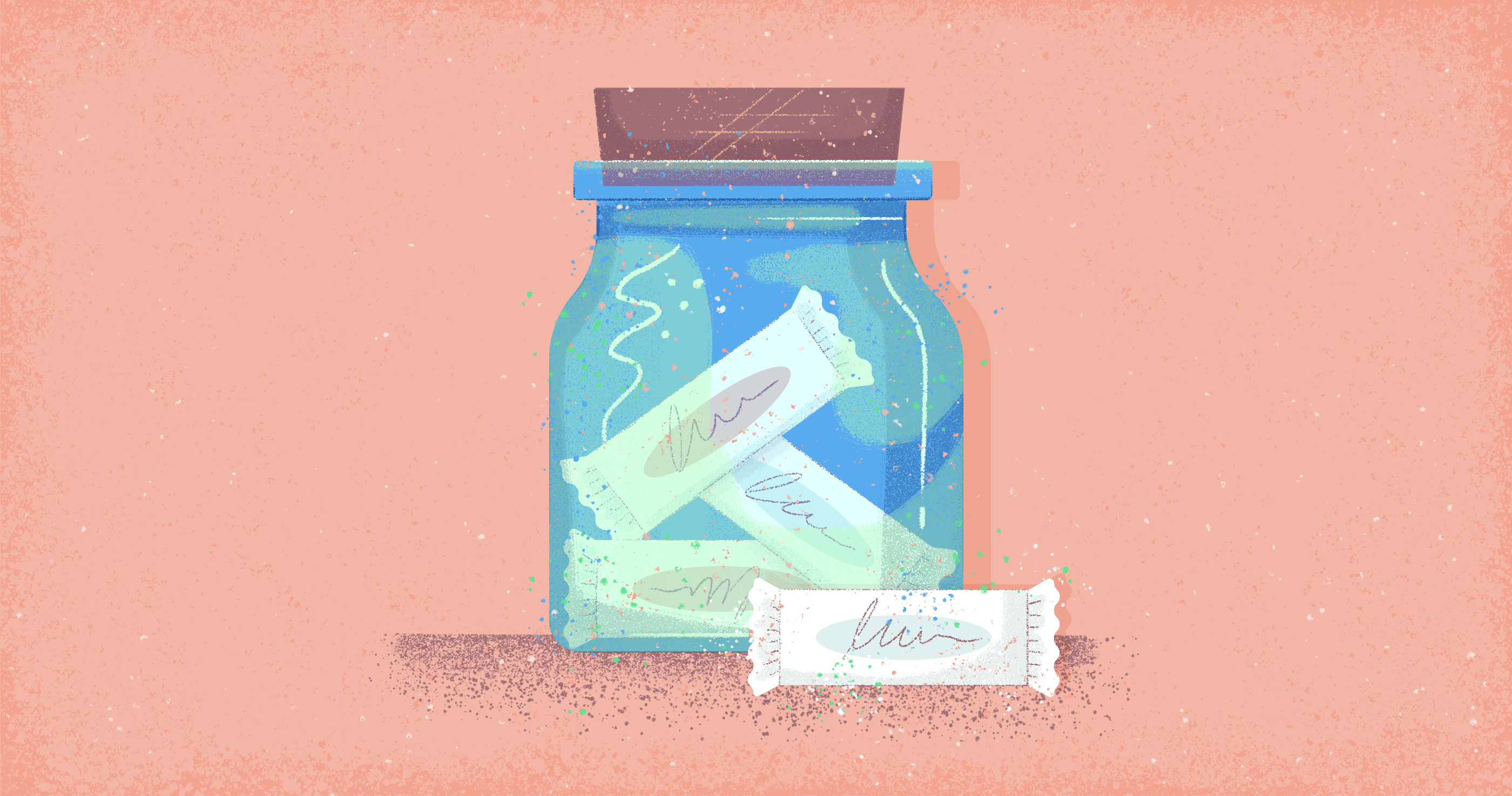 Growing up the youngest of four kids induced in me the unusual ability to hide food. I didn’t hide food indiscriminately though, just the good snacks, and actually only one of the good snacks—the peanut butter chocolate chip granola bar. We always had plenty to eat at our house. I didn’t know what it was like to be hungry, but I did grow up knowing what it was like to have an inordinate desire for a certain type of granola bar and then miss out on getting one because my older siblings had devoured them before I could nab one. It didn’t take me many times of missing out on the longed-for granola bars to start plotting my granola bar acquisition. I would go on high alert when my mom returned from getting groceries. With a very helpful exterior I’d unload all the bags, casually putting things away here and there, while on the inside I was a bird of prey. My eagle eyes could spot the lettering on the granola bar box through the thin, brown, plastic bags.

My mom had a large blue-green glass jar on the counter in our kitchen where any premade snacks were kept. We were allowed to have a snack from the jar only if we got permission. Part of putting away the groceries meant opening any boxes of said snacks, putting them in the jar, and throwing the box away. This made it easy for a young thief like me. I would pocket two of the granola bars and make my way up to my room at my earliest opportunity. I would eat one and stash the other in a large bottom dresser drawer under layers of clothes. 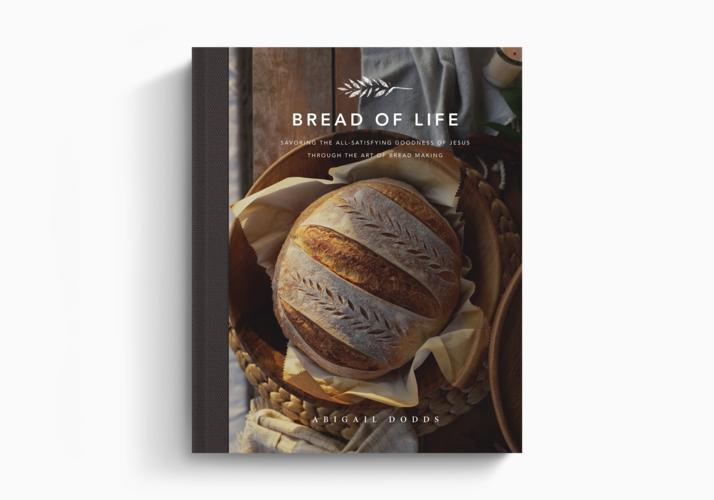 Abigail Dodds invites readers to ponder and celebrate God’s spiritual and physical provision in Christ through the hands-on art of bread making.

This thieving was, thankfully, short-lived. I recall it happening only a few times. Yet it’s the sort of thing I remember even now. Why? Because my conscience knew it was wrong, and I willfully did it anyway—it left an impression on me! If you’d have asked me then what it was exactly that I was doing wrong, I’d probably have put it in the category of disobeying. And that’s true—I was disobeying. But a lot more was going on than just disobeying. I was also stealing something actually intended for me because of a sinfully mistrustful and independent spirit.

When God made Adam and gave him the job of naming all the animals, what became clear was that, as unique and wonderful as each of them were, none would do for Adam. As special as the star-nosed mole, as unparalleled the pink fairy armadillo, and as truly unpredictable the pleasing fungus beetle, there was nary a suitable helper for Adam among the lot. Cue Eve’s entrance stage left, or rather right out of Adam’s rib. His response did her justice:

Then the man said,
“This at last is bone of my bones
and flesh of my flesh;
she shall be called Woman,
because she was taken out of Man.” (Gen. 2:23)

For all the fun a pink fairy armadillo might provide, inspiring Adam’s poetic exclamation was not part of its skill set. I imagine Eve was equally glad to behold Adam, although perhaps a bit curious about the entire situation.

We have to assume that Adam got her up to speed, that he was filling her in on God’s instructions to him about the trees in the garden—which ones could be eaten from and which one couldn’t. He was showing her the difference between the ornate horned frog and the Brazilian horned frog. Or perhaps God himself was walking in the garden and telling her all she needed to know. Whatever happened, when the serpent arrived on the scene, she was not ignorant. She expressed herself quite well considering she had just been approached by a talking, crafty creature.

You likely know how the story ends. Despite giving it the old college try, doing her best to restate what she’d been told, Eve succumbed to the temptations of the serpent. She ate the fruit from the tree that they were not to eat from. She disobeyed. Perhaps that’s all we’re used to seeing when we read that monumental part of the history of mankind. But is there more going on? Sure, she disobeyed, but was that all? Why would she believe a crafty serpent more than the Creator God?

She didn’t take from the tree of the knowledge of good and evil because she was being deprived of food. Just like my childhood didn’t involve going hungry, neither did Eve’s days in the garden. There were plenteous trees for food. Eve’s home was the garden. The food in the garden was put there for her. She was not fending for herself. So why steal something from your own home? It can only be because the temptation of the serpent had lodged a seed of mistrust toward her Maker. He did so by suggestion, not assertion; by question, not statement. By asking, “Did God actually say?” the serpent subtly invited Eve to stand as judge over God while he simultaneously inserted an exaggeration in his question: “Did God actually say, ‘You shall not eat of any tree in the garden’?” (Gen. 3:1). Although Eve contradicted the serpent on this point, he had already opened the door for incredulity toward God.

Maybe her Maker wasn’t a good provider after all. Maybe he was holding out on her—keeping back the very best and only giving her a sorry second-place provision. Perhaps what she really needed to do in order to be well-provided for was steal from her Father—to start providing for herself.

The Self-Justifying Sin of Abstraction1

The sin that Eve committed lodges in our hearts as well. Whenever we take a rule from our Father and begin examining it apart from him—apart from his character, his fatherly affection, his authoritative goodness—we fall into sin. We become susceptible to lies. Why? Because the rules were never meant to exist apart from the God who gave them to us. Once the serpent had led Eve to begin taking a microscope to God’s prohibition, away from the presence of God and the truth of his character, it isn’t any great surprise that his baldfaced lie, “You will not surely die,” found hospitality in her newly corrupted mind (Gen. 3:4).

We aren’t being given arbitrary commands from an automated god.

The God from whom life and beauty and provision flow was then seen as a liar and rival. The serpent gave Eve a new way to understand herself and God. This was the first ideology, the first alternative worldview, and, as all ideologies and alternative worldviews have been ever since, it was founded on lies—abstracted from reality. The serpent’s system presents “divine love as envy, service as servility, and a suicidal plunge as a leap into life.”2 Eve’s eyes departed from her sustainer and Creator and fixed on the rule and the fruit.

Have you ever justified your disobedience to God’s words by removing them from the context of his character and authority? What would it sound like to do such a thing? It may sound quite a bit like so much of our “nuanced” excuse-making. We might reason, “Eve was not engaged in any unorthodox behavior. Her confession did not contradict the basic creeds of Christianity. We can see that her interpretation of God’s command allowed for her to eat that particular type of fruit. Her conscience was simply formed to allow for her to eat it. Also, we must be generous in understanding that eating fruit is not a sin in and of itself. It certainly doesn’t rise to the level of rejecting the deity of Christ or denying the Trinity, after all! This is clearly a tertiary matter about which Christians ought to agree to disagree.” I hope that sin-sick reasoning makes you tremble as it does me!

When I tell my son to stay off the grass in our yard, he may initially find that odd or unreasonable. He might be tempted to disobey because when he starts thinking about the grass and looking at it—how nice it looks, how he wants to play soccer on it—he will likely think, “What’s wrong with walking on the grass? The grass is perfectly fine!” He doesn’t know that the lawn guys just came through and sprayed poison on it to kill the weeds. But if he starts thinking about me, his mom, he’s much more likely to obey, because he knows I wouldn’t arbitrarily tell him not to walk on the grass. He knows me, so he knows that I must have a good reason, even if it’s a reason I haven’t shared with him. So, too, with our Father.

How quickly abstraction can turn us all into little sin-justifiers! But none of the instructions and commands and prohibitions of God may be pulled apart from him. We may not doubt him—his character and his love—which means we may not doubt the instructions born of that love. We aren’t being given arbitrary commands from an automated god. We are being given loving, good commands from a loving, all-powerful, all-knowing, holy God, even when we don’t yet fully understand the purposes behind them.

This article is adapted from Bread of Life: Savoring the All-Satisfying Goodness of Jesus through the Art of Bread Making by Abigail Dodds.

Barbara Hughes discusses why discipline is important for Christian women, highlighting her own struggle to cultivate a disciplined life over the years.

This unique book is an enriching blend of devotional meditations and recipes that invites readers to ponder the true bread of life as they bake for their families and friends.

The Food of Christian Survival

When you understand Bible reading as the means, the food, the fuel, the sustenance of your Christian life, then you will consume it with joy, like a hungry person eats bread.