The Poverty of Nations: A Sustainable Solution 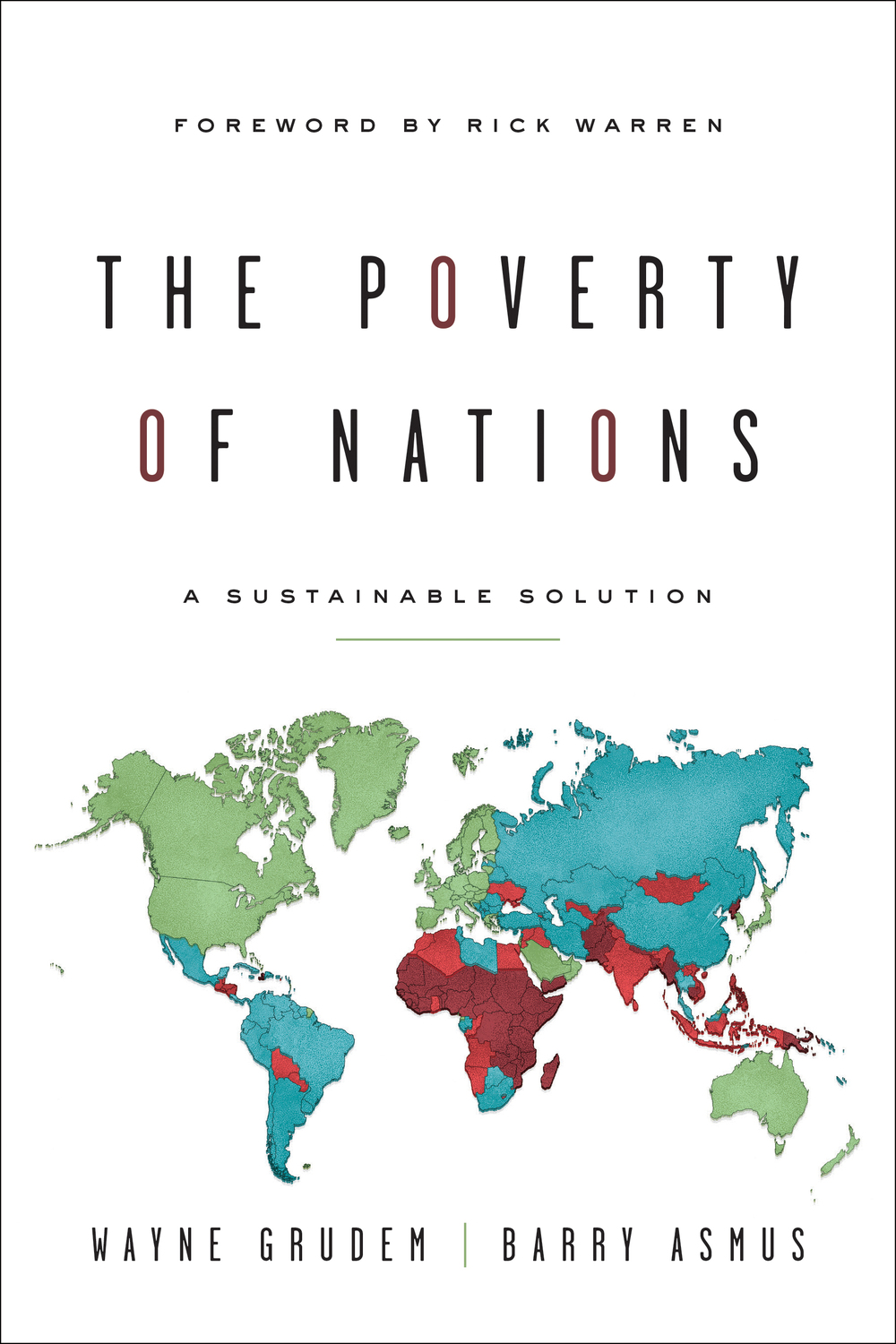 The Poverty of Nations: A Sustainable Solution

The whole world has a stake in the war against poverty and leaders across the globe are looking for a permanent solution. That’s why economist Barry Asmus and theologian Wayne Grudem have teamed up to outline a robust proposal for fighting poverty on a national level. These two experts believe the solution lies in a comprehensive development plan that integrates the principles of a free market system with the Bible’s teachings on social ethics. Speaking to the importance of personal freedom, the rule of law, private property, moral virtue, and education, this book offers a clear path for promoting economic prosperity and safeguarding a country’s long-term stability—a sustainable solution for a world looking for the way forward.

Barry Asmus (PhD, Montana State University) is a senior economist at the National Center for Policy Analysis, a non-profit organization dedicated to promoting private sector, market-based solutions to economic growth and development. Asmus has been writing and speaking on political and business issues for over twenty-five years. Barry lives in Phoenix, Arizona, with his wife, and they have two adult children and four grandchildren.

Wayne Grudem (PhD, University of Cambridge; DD, Westminster Theological Seminary) is Distinguished Research Professor of Theology and Biblical Studies at Phoenix Seminary, having previously taught for twenty years at Trinity Evangelical Divinity School. He is a former president of the Evangelical Theological Society, a member of the Translation Oversight Committee for the English Standard Version of the Bible, the general editor of the ESV Study Bible, and has published over twenty-five books.

“This book will become a standard text that we will use to train every mission team we have in 196 countries. It should be required reading in every Christian college and seminary, by every relief and mission organization, and by every local church pastor.”
Rick Warren, Pastor, Saddleback Church, Lake Forest, California

“I became an economist because I fell in love with the idea that a nation’s choices could determine whether citizens faced wealth or poverty. Thirty years of research has led me to believe that wealth comes from a choice to support freedom and limited government. I became a Christian because I fell in love with Jesus Christ. The Bible says we were created in God’s image and that while we should love our neighbor, we are also meant to be creators ourselves. I never thought these were mutually exclusive beliefs. In fact, I believe biblical truth and free markets go hand in hand. I have searched far and wide for a book that melds these two worldviews. Asmus and Grudum have done it! A top-flight economist and a renowned theologian have put together a bulletproof antidote to poverty. It’s a tour de force. The church and the state will find in this book a recipe for true, loving, and lasting justice.”
Brian Wesbury, Chief Economist, First Trust Advisors LP; Former Chief Economist, Joint Economic Committee of the US Congress

“Grudem and Asmus show how the science of economics can be combined with a morality rooted in religious belief to help us understand why some nations are rich and others poor.”
John C. Goodman, President and CEO, National Center for Policy Analysis

“The religious leaders of the world wonder why poor countries remain poor. Key figures from Billy Graham to Pope Francis and the Dalai Lama have often urged the rich of the world to care for the poor—but how to do it? How to organize government and business to ‘remember the poor’? Now, theologian Wayne Grudem and economist Barry Asmus bring forward a book to explain how free enterprise and, crucially, biblical teaching combine to illuminate the path to progress for the poor. Every legislator—every voter—needs to read this.”
Hugh Hewitt, nationally syndicated radio talk show host; Professor of Law, Chapman University

“Grudem and Asmus provide a comprehensive set of principles for reducing poverty around the world. Seldom does one find such a complete and thoughtful integration of sound economics with good theology. The Poverty of Nations is strongly recommended for anyone concerned with world poverty.”
P. J. Hill, Professor of Economics Emeritus, Wheaton College

“The authors have written clearly that the sustainable solution to the poverty of nations is the free-market system—the most moral and successful economic arrangement and the only one capable of enabling people to produce their way out of poverty and to personal well-being.”
Jon Kyl, former United States senator (Arizona); former Senate Minority Whip

“There are not many Christian books on this subject. Even less those that integrate a Christian worldview with economic systems, free markets, freedom, and prosperity, besides poverty. Grudem and Asmus offer a thorough analysis of several economic systems that went wrong and offer a plausible defense of the biblical basis for the free-market solution and how it could change a nation. There may be some question as to whether such a system would work for Latin American countries. But because of the underlying biblical principles, this book should be translated and studied in other parts of the world besides America. It will help Christians engage the social, economic, and political issues of today in a more significant and effective way.”
Augustus Lopes, Former Pastor, First Presbyterian Church, Goiânia, Brazil

“For the longest time, in Christian circles certainly, the crisis of poverty has deserved a thorough and practical response. Comprehensive in scope and practical in style, this book offers insights that cannot be taken lightly.”
Mutava Musimi, MP, Former Member of Parliament, Kenya National Assembly

“Many excellent authors over the past dozen years have felt the elephant’s trunk, legs, and tail. Wayne Grudem and Barry Asmus are the first to show the whole behemoth. They explain clearly and simply what we must know to love truly those in need. The Poverty of Nations should be required reading at every Christian college.”
Marvin Olasky, Editor in Chief, WORLD Magazine

“There are many secular books on poverty, and there are many books on the Christian response to poverty. But Wayne Grudem, a theologian, and Barry Asmus, an economist, have done something far less common and far more valuable. They have successfully integrated Christian ethics and theology with sound economics. The result is a comprehensive and deeply satisfying synthesis. If you want to understand and help alleviate poverty, rather than merely supporting feel-good policies that may do more harm than good, you should read this book.”
Jay W. Richards, PhD, author, Money, Greed, and God; Distinguished Fellow, The Institute for Faith, Work, and Economics; Senior Fellow, the Discovery Institute

“Given the plethora of myths and misconceptions that so many people hold with regard to the importance of a free economy, its moral foundation and practical benefits, especially for the poor, The Poverty of Nations provides an easy-to-read, sensibly organized, and morally clear argument on behalf of a free society. Merely reading the table of contents will provide clearer thinking than many graduate students get in economics courses.”
Fr. Robert A. Sirico, President, Acton Institute

“All right-thinking Christians are deeply concerned about the seemingly intractable problems of global poverty and inequality. Many view free-market economics as the cause of the problem rather than the solution, and assume with the best of intentions that aid, debt cancellation, wealth redistribution, environmentalism, and trade protectionism are what is needed. Wayne Grudem and Barry Asmus provide a compelling account of how nations can alleviate their poverty by means of development, increasing the production of goods and services, within a free-market model that guarantees the right to property and personal freedoms. This clear and accessible book is grounded in solid economic theory, historical analysis, and, above all, faithful biblical exegesis. The result is not a call for untrammelled capitalism, but for responsible development shaped by core cultural values that lie close to the heart of the Christian faith. Not everyone will agree with their approach, but anyone concerned to help those affected by poverty in our world will have to take their arguments seriously.”
John Stevens, National Director, The Fellowship of Independent Evangelical Churches

“Relying upon a thoughtful combination of objective economic history, a clear understanding of human nature, accurate economic analysis, and a moral code based on personal freedom and the pursuit of happiness, the authors delve into means for alleviating the poverty of nations. The writing style is highly approachable and draws the reader into a realm of ideas that envisions hope for the downtrodden if government authority is properly exercised. Like The Wealth of Nations, it demands the attention of good-hearted citizens and hardened government officials to appreciate free markets in their moral light.”
Stephen Happel, Emeritus Professor of Economics, W. P. Carey School of Business, Arizona State University

“The grinding poverty of hundreds of millions of people made in God’s image ought to be of deep concern to every believer. Most Christians I know are generous to the poor without really thinking about the causes of poverty. This vital contribution from Wayne Grudem and Barry Asmus will help us think theologically about poverty. May it inform our prayers, giving, and actions.”
Andrew Evans, Minister, Christ Church, Liverpool; Tutor, Wales Evangelical School of Theology

"Economics is too important to leave to economists alone. Theology, likewise, is too important to be left to theologians alone. This book, written for non-specialists by an economist and a theologian, must therefore be taken seriously and used to stimulate debate and action that will address the scourge of poverty."
Peter S. Heslam, Senior Fellow, University of Cambridge; Director, Transforming Business

“The Poverty of Nations shows what not only poor nations but also America itself must do to create jobs, opportunities, and a more rewarding and better future. This is a very good book!”
Pete du Pont, former U.S. Congressman and former Governor of Delaware

Download a Free PDF Version of The Poverty of Nations