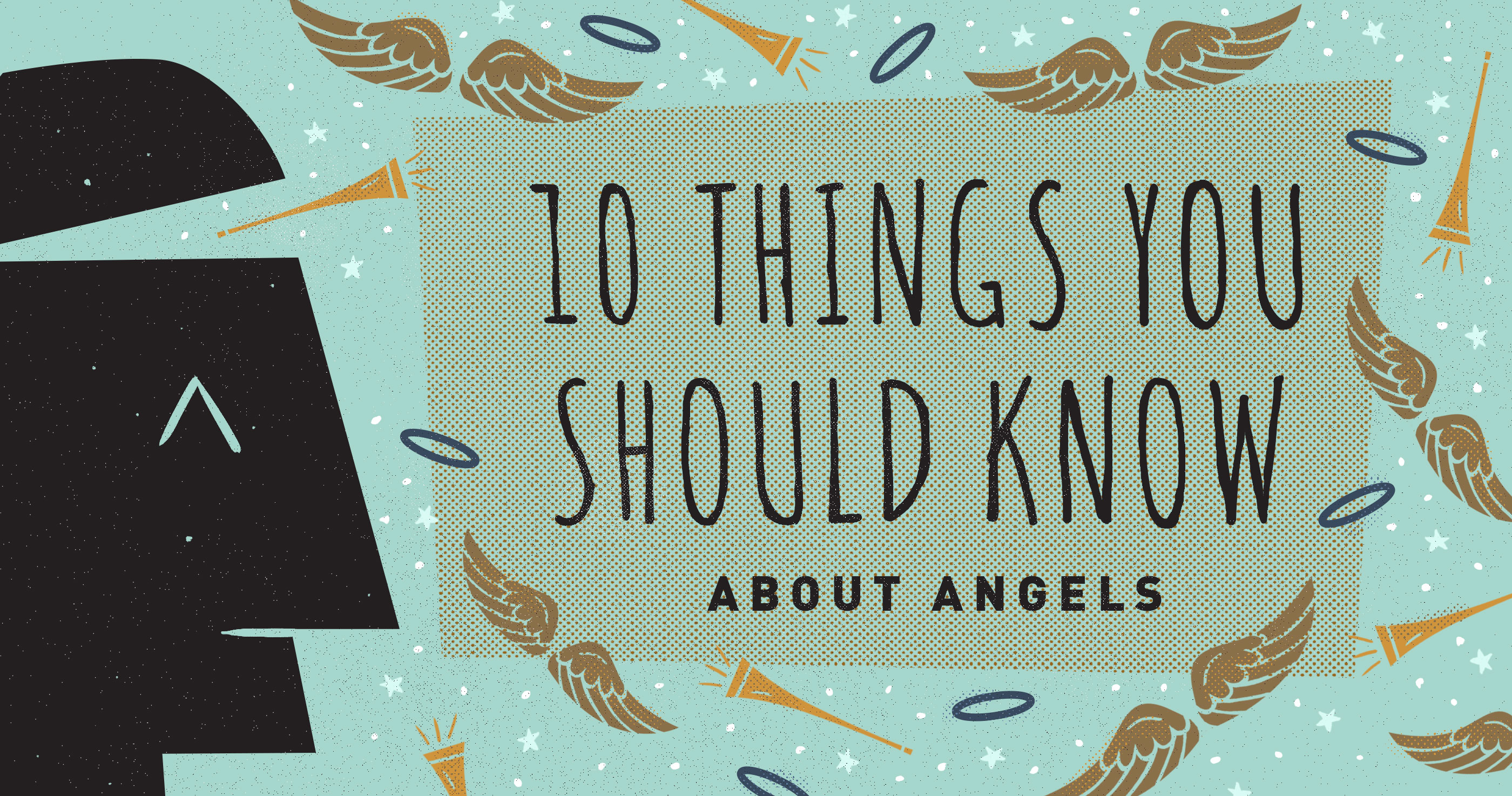 The book of Hebrews provides the key descriptors of angels: “Are they not all ministering spirits sent out to serve for the sake of those who are to inherit salvation?” (Heb. 1:14). From this text we learn that angels are spirits, are servants, and have a mission. Augustine (AD 354–430) sums it up beautifully: “Angel’ is the name of their office, not of their nature. If you seek the name of their nature, it is ‘spirit’; if you seek the name of their office, it is ‘angel’: from what they are, ‘spirit,’ from what they do, ‘angel.’”1 For Augustine the angels are servants and messengers. That is their job.

2. There are ranks of angels.

Dionysius the Areopagite (c. AD 500) thought so. He developed an elaborate hierarchy of angels which has influenced both Roman Catholic and Orthodox angelology. He grouped angels into three groups of three. The highest order is nearest to God, the lowest order is nearest to humankind. On this scheme, seraphim are the highest of the choir of heaven, whose role is to adore the triune God. Angels are the lowest of the celestial beings because they bring the divine message to us terrestrial creatures. The trouble with Dionysius’ scheme is that it is adrift from Scripture. We know that there are angels and archangels. Michael, for example, is an archangel and leader of the angelic army (Jude 9 and Rev. 12:7). But beyond that is speculation.

3. There are guardian angels.

Catholic philosopher Peter Kreeft knows how many guardian angels there are on earth. He argues that every human being has a guardian angel. Scripture does not provide evidence for this particular idea. However, Scripture makes it plain that there are guardian angels. The cherubim guard the tree of life in Genesis 3:24 and Psalm 91 speaks of angels guarding the psalmist. The reference is plural not singular (Ps. 91:11).

Herman Bavinck2 offers much wisdom on the subject: “Most support for the doctrine of guardian angels comes from Matthew 18:10, a text undoubtedly implying that a certain class of angels is charged with the task of protecting ‘the little ones.’ However, there is here not even a hint that every elect person is assigned his or her own angel. This idea is found only in the apocryphal book of Tobit. But by that very fact this doctrine of guardian angels also betrays its origin.”3 Acts 12:15 does not support individual guardian angels either. Most commentators rightly argue the text reflects popular Jewish belief held by the servant girl. It was popularly believed at the time that each person has a guardian angel. She thought Peter did (“his angel”). However, this text is descriptive of what she thought and is not the basis for a doctrine.

4. Not all creation is fallen, some of the angels are unfallen.

In Genesis 3 we find the ground is cursed because of the sin of Adam (Gen. 3:18). So, it is no surprise that in Romans 8:20–22, Paul writes of the groaning creation which needs to be set free from decay. Consequently, preachers and theologians refer to the fallen creation. However, nuance is needed. There are creatures who did not sin, who did not fall. These are those angels who, unlike Satan, stayed loyal to their creator. This is a significant fact. It means that the living God has never ceased to be worshipped since creation began. Revelation 4–5 gives a glimpse of such heavenly worship.

5. Angels appear in key moments in the biblical storyline.

6. Angels appear in the biblical text in a variety of ways.

Some biblical descriptions of angelic beings ascribe wings to them either four (e.g. the cherubim in Ezekiel 41:18–19) or six (e.g. the seraphim in Isaiah 6:1–4). The language is rich in metaphor and word pictures. Tertullian in the second century made this claim: “Every spirit is possessed of wings. This is a common property of both angels and demons. So, they are everywhere in a single moment; the whole world is as one place to them; all that is done over the whole extent of it, it is as easy for them to know as to report.” Western art has taken its cue from statements such as this, and angels with wings have been in evidence ever since. On other occasions, angels appear wingless and in human form (e.g. cf. Gen. 18:2; 19:1–5). Tertullian had a too materialistic understanding of the nature of a spirit.

7. Angels are not to be worshipped.

Only the creator is worthy of worship (Rom. 1:24–25). Angels are mighty creatures and there is a temptation to worship them. What happened to John is case in point. An angel sent by God revealed to him what was to come. His response was dramatic: “I fell down to worship at the feet of the angel who showed them to me” (Rev. 22:8). The angelic reaction was empathic: “You must not do that!” (Rev. 22:9). Why so? The angel explained: “I am a fellow servant with you . . . worship God” (Rev. 22:9). In contrast, the false teachers troubling the Colossians advocated the worship of angels (Col. 2:18). Unfallen angels know better.

The living God has never ceased to be worshipped since creation began.

8. Angels are not the object of prayer.

There are no examples of prayers addressed to angels in Scripture. Jesus entertained that possibility of angelic assistance but through asking the Father. When confronted by the crowd with clubs and swords in the Garden of Gethsemane he made this option clear: “Do you think that I cannot appeal to my Father, and he will at once send me more than twelve legions of angels?” (Matt. 26:53). I cannot rule out praying to the Father for angelic assistance. However, addressing angels in their own right falls into another way of spoiling the gospel. This is the way of interposition. Instead of addressing the Father and Jesus, as our Great High Priest, another or others are put in their place (e.g. Mary and the saints).

9. Angels are judged by believers.

Human beings and angels are persons. At the very least, the ability to say “I” in speech is a sufficient reason for ascribing personhood to a creature. The angel who appears to John speaks in these terms: “I am a fellow servant with you and your brothers the prophets” (Rev. 22:9). Both human beings and angels are moral persons. Their creator holds both kinds of creature accountable for their actions. Consequently, both fallen angels and fallen human beings face divine judgment. Happily, for believers, Christ has faced it for us. In the hierarchy of creaturely importance, it appears that human beings are higher than angels. According to Paul, believers judge angels (1 Cor. 6:3). There is no biblical text to support the idea that angels judge us.

10. Scripture is addressed to us—not angels.

The fact is that Scripture is not addressed to angels, but to us. There is therefore so much we do not know about angels. As spirits, they do not have bodies in my view, although not all would agree with me. (Herbert Lockyer, for example, argues that angels have “spiritual bodies.”) What is it like to be a spirit? Why did some of the angels defect from God and not others? Angelology lends itself to much speculation. For example, Orthodox theologian, Sergius Bulgakov (Jacob’s Ladder) maintains that there are angels of fire and water: “The angel of fire himself is fiery in the sense that he carries in his nature the noetic element of fire, just as the angel of waters has an aqueous nature.” How does he know this? By way of contrast, like Calvin, we need to be very cautious when we go beyond Scripture and when we do so we need to say that this is what we are doing. The gospel can be spoiled by disproportion. Certain Bible truths can become central to our thinking when they are not central to the Bible’s own emphases. Too much can be made of angels. Adherents of New Age thinking provide such an example.

Graham A. Cole is the author of Against the Darkness: The Doctrine of Angels, Satan, and Demons.

When the Darkness Will Not Lift
John Piper
Crossway is a not-for-profit Christian ministry that exists solely for the purpose of proclaiming the gospel through publishing gospel-centered, Bible-centered content. Learn more or donate today at crossway.org/about.