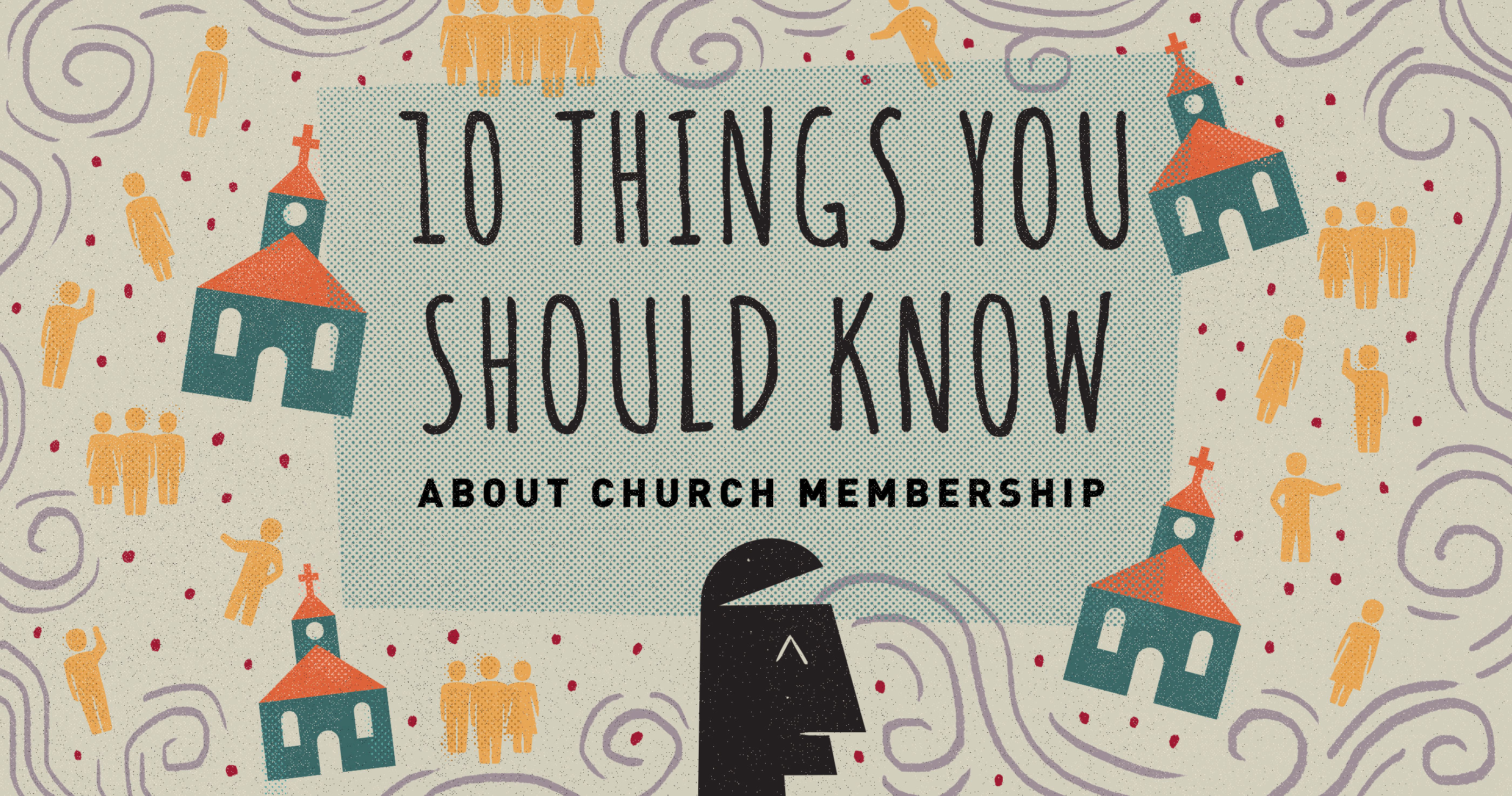 Paul says in 2 Corinthians 6:14–7:1 “Do not be unequally yoked with unbelievers.” That does, eventually, apply to marriage; but Paul applies it first to membership. “We are the temple of the living God.” He doesn’t say, “We are temples,” individually. It’s not a reference to our individual bodies (as it is in 1 Cor. 6:19). He says we are the temple, corporate singular. It’s a corporate reference to the church as God’s dwelling place. And there’s a dual application: “Go out from their midst.” Don’t identify with the world, its leaders and its loves, “and be separate from them.” Identify together—corporately—with God’s temple, the church in Corinth. And don’t take known unbelievers into membership of that church—don’t yoke up with them in the harness of discipleship to Jesus and local church ministry—because that will blur the line.

4. Membership “turns” the keys of the kingdom.

No, I don’t mean that being a member of a local church automatically gets you a green light into heaven. Some people have gone to hell as life-long members of churches. But in Matthew 18:17, the power of the keys, which Jesus gives to the church, is the power to externally affirm or deny the orthodoxy of gospel proclamation and the genuineness of gospel faith. From the church’s perspective, membership is the congregation affirming (albeit fallibly) a person’s doctrine and testimony in the gospel, and so affirming visibly what heaven has already declared of them invisibly—they’re members of the church universal by faith and repentance toward Jesus. That affirmation is the job not just of the elders, but of the whole congregation (see 2 Cor. 2:6).

5. Membership is a meaningful commitment.

When God counts his people for the very first time in Numbers 1:1–3, he counts everyone adult male ready for war. God was forming an army, and he wanted everyone to know who could be counted on to help carry out the conquest in Canaan. Don’t worry, I think women should be church members just as much as men! The argument here is that Christians should be counted in, so that we can be counted on. That’s what local church membership should mean. It’s not just signing your name on a piece of paper. From the individual’s perspective, membership is what your signature signifies.

It signifies your commitment to believe and live in a biblical, God-honoring way. This is why many churches (including ours) require prospective members to sign a statement of faith and a church covenant. Signing the statement of faith signifies that others can count on you to teach and abide by the doctrine stated in it. Signing the church covenant signifies that others can count on you to live according to the commitments specified in a church covenant—living a holy life, attending services, praying for your fellow church members, serving them, loving them, supporting the church’s discipline and attending its ordinances (baptism and the Lord’s Supper), growing in truth and love, evangelizing your unsaved friends, giving financially to support the ministry and needs of the church, etc.

The Bible sees local churches as flocks of sheep (1 Pet. 5:3). It’s never a good thing for a sheep to go solo looking for green grass. Rogue sheep are easy prey. We belong in the safety of a flock. Membership helps keep us gathered with the other sheep under the protection of the shepherd. Besides, what kind of under-shepherd doesn’t know which particular sheep the owner has entrusted to him? Membership helps us keep track of which sheep we’re responsible to graze, gather, guide, and guard.

Paul tells Timothy that the local church in Ephesus is like a family with members (1 Tim. 3:15). Friend, what kind of dad or mom would you be if you didn’t know which of the children on the block you were responsible to feed, or which ones should be in your house at bedtime? I don’t discipline the kids down the street; I discipline my own kids. It’s unsafe to be a kid without parents and a home. Membership helps church leaders know who belongs to the household, and it lets family members know where they should go when it’s time for dinner and rest.

If a local church like the one in Ephesus is a physical body, “members of one another” (Eph. 4:25; 1 Cor. 12:27), then each person is a body part—an arm or a leg, a hand, foot, thumb, or toe. A body part detached from the rest of its body is not beautiful or cool. It’s gruesome. But that’s what it looks like for a Christian to refuse to join a local church—an arm flopping around on the ground. Arms don’t last long when they’re detached from a body. And think of what happens to a church body when you refuse to attach your part, or you violently detach from it . . . well, we can only take the metaphor so far; but Christian, to be what God designed you to be, to be part of the body, you need to figure out which body you’re going to be attached to, and then formally, visibly, join that body—by becoming a member of it. Besides, your church body needs you, even if you’re a tiny pinky toe or an unseen, uncelebrated pancreas.

It sounds big to say that you’re a member of the universal church and that you love all Christians in the world. But can you really love all Christians in the world equally well? To bear one another’s burdens, spur one another on to love and good deeds, consider each other more important than yourselves, bear with one another in love, exhort one another, and all the rest, it seems we need to be together in the same place. It’s the people sitting next to you, across from you, two aisles up, four aisles back—the local people—that are the most likely beneficiaries of your love. Local church membership says, These are the particular saints I’m going to prioritize in my discipling and love—warts and all.

Membership helps keep us gathered with the other sheep under the protection of the shepherd.

Matthew 18:17 says, “If he refuses to listen to them, tell it to the church. And if he refuses to listen even to the church, let him be to you as a Gentile and a tax collector.” Who is “the church” there? Is Jesus telling the disciples that anytime any professing Christian remains unrepentant, that every Christian in the world should be told about it? No, he’s referring to the local church. But as soon as we say that, we are assuming that there was a clear way of discerning who was part of the local church. Who did they tell? Every Christian in the same city? Every Christian who had ever attended that local church more than once? It’s more likely that they were to tell the members of that local church.

Paul assumes as much in 1 Corinthians 5:12. “For what have I to do with judging outsiders? Is it not those inside the church whom you are to judge? God judges those outside. ‘Purge the evil person from among you.’” Paul assumes the church in Corinth knew who was in it and who was not; so how did they know who was who? There seems to be, in 1 Corinthians 5, some clear way of discerning who’s inside and who’s outside a local church.

You get the same idea in 2 Corinthians 2:5–6: “Now if anyone has caused pain, he has caused it not to me, but in some measure—not to put it too severely—to all of you. For such a one, this punishment by the majority is enough, so you should rather turn to forgive and comfort him, or he may be overwhelmed by excessive sorrow.” This paragraph is talking about the same sinning brother from 1 Corinthians 5, the one who was sleeping with his father’s wife. Evidently, they had exercised church discipline toward this man. But notice who did it—“the majority.” The majority of who? That word ‘majority’ suggests that there was a known number of people who made up the local church in Corinth. The majority of that number had decided to subtract this man from that number, to warn him that he should not count himself redeemed if he remained unrepentant.

In 1 Peter 5:2–3, Peter tells the elders to “Shepherd the flock . . among you,” and then he says elders should not be “domineering over those in your charge.” The word there is actually “over the allotments, the portions, the lots.” It’s as if Peter’s saying that certain people were allotted by God’s providence to be in a particular church, under particular elders, at a particular time. These people made up “the flock among you” which the elders were to shepherd. They weren’t to shepherd every flock—just the flock “among you”. Again, it’s not a proof-text. But Peter thought the elders of the church he was addressing knew which particular Christians “belonged” to their flock—which ones God would one day hold them accountable for overseeing.

By calling yourself a Christian, you’re saying that you submit to the kingship and authority of Jesus. But Jesus has delegated some of his authority to his under-shepherds—pastors and elders of local churches. Jesus wants his sheep under the care of those under-shepherds. But if you refuse to submit yourself to any of the under-shepherds that Jesus provides for you, how can you say you’re submitting to Jesus?

Paul Alexander is the coauthor, with Mark Dever, of The Deliberate Church: Building Your Ministry on the Gospel.

Paul Alexander (MDiv, Trinity Evangelical Divinity School) is the pastor of Grace Covenant Baptist Church in Elgin, Illinois, where he lives with his wife, Laurie, and their six children.