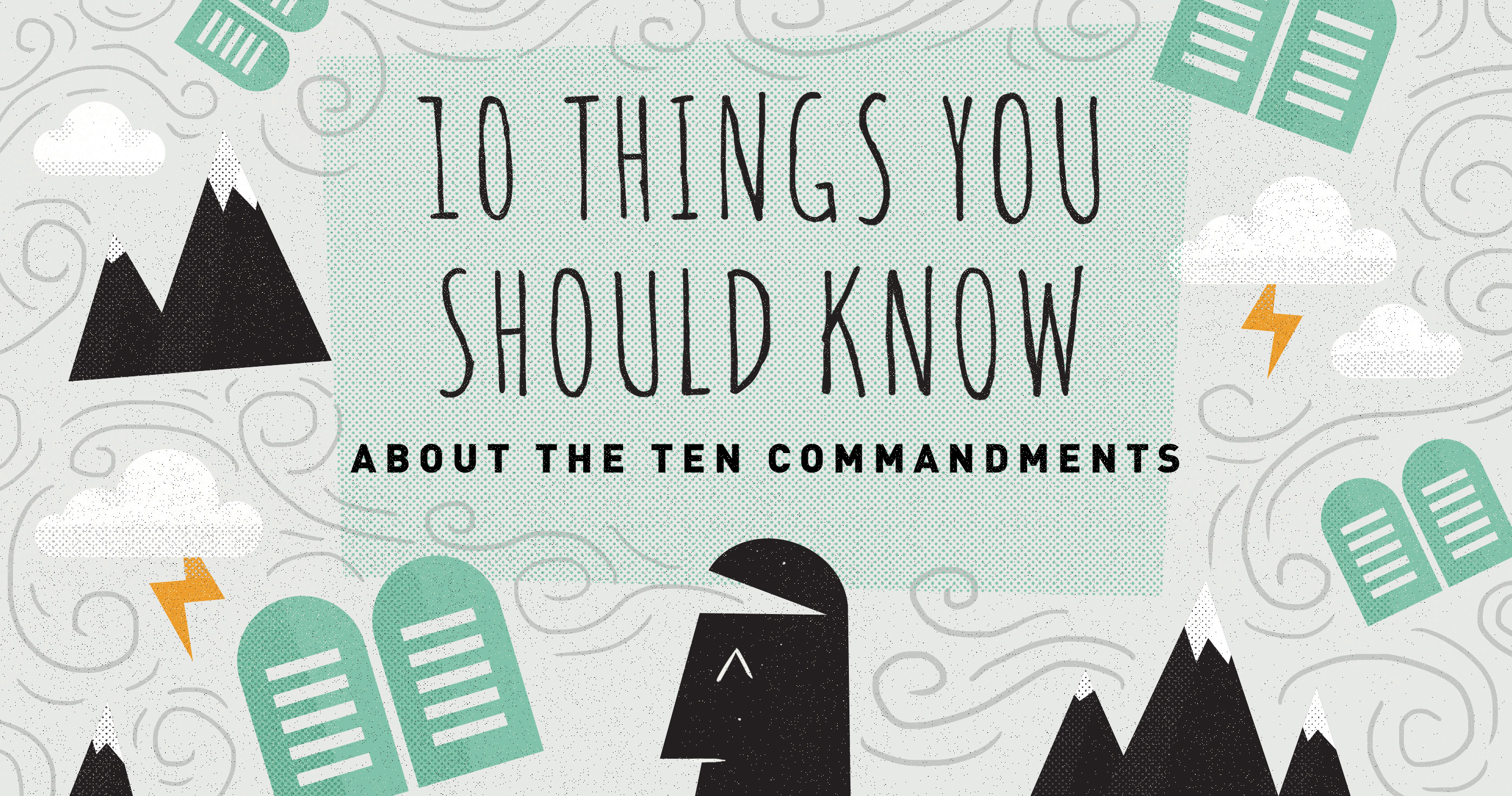 1. Moses never actually refers to them as the “ten commandments.”

The Hebrew expression, which occurs three times in the Old Testament (Ex. 34:28; Deut. 4:13; 10:4), literally means “ten words.” This is why Exodus 20 is often referred to as the Decalogue, deka being the Greek word for “ten” and logos meaning “word.” These are the Ten Words that God gave the Israelites at Mount Sinai—and, I would argue, the Ten Words that God wants all of us to follow.

The law is an expression of the Lawgiver’s heart and character. We must think about that before we say, “I don’t care for laws,” or before we bristle at the thought of do’s and don’ts. The commandments not only show us what God wants; they show us what God is like. They say something about his honor, his worth, and his majesty. They tell us what matters to God. We can’t disdain the law without disrespecting the Lawgiver.

3. They set us apart from the world.

As Christians, we are a kingdom of priests and a holy nation (1 Pet. 2:9). We must be prepared to stand alone, to look different, and to have rules the world doesn’t understand. Of course, we aren’t always the holy people we should be, but that’s what he has called us to be. That’s who we are. We are God’s people, set apart to live according to God’s ways.

4. They don’t strip our freedom, but instead provide it.

We too often think of the Ten Commandments as constraining us—as if God’s ways will keep us in servitude and from realizing our dreams and reaching our potential. We forget that God means to give us abundant life (John 10:10) and true freedom (John 8:32). His laws, 1 John 5:3 tells us, are not burdensome.

God is not trying to crush us with red tape and regulations. The Ten Commandments are not prison bars, but traffic laws. Maybe there are some anarchists out there who think, “The world would be a better place without any traffic laws.” A few of us drive as if that were so! But even if you get impatient when you’re at a red light, try to zoom through the yellow, and turn left on a very stale pink—overall, aren’t you glad that there is some semblance of law and order? People stop and go. People slow down when driving by schools. They stop for school buses. You wouldn’t be able to drive your car to the grocery store without laws. When you drive on a switchback on a mountain pass, do you curse the guard rails that keep you from plunging to an untimely death? No, someone put them there at great expense, and for our good, that we may travel about freely and safely.

The Ten Commandments are not instructions on how to get out of Egypt. They are rules for a free people to stay free.

We are God’s people, set apart to live according to God’s ways.

5. They were not given so that we could earn our salvation.

Some people view Christianity as: God has rules, and if I follow the rules, God will love me and save me. That’s not what happened in the story of the exodus. The Israelites were an oppressed people, and God said, “I hear your cry. I will save you because I love you. And when you are saved, free, and forgiven, I’m going to give you a new way to live.”

Salvation is not the reward for obedience; salvation is the reason for obedience. Jesus does not say, “If you obey my commandments, I will love you.” Instead, he first washes the feet of the disciples and then says, “If you love me, you will keep my commandments” (John 14:15). All of our doing is only because of what he has first done for us.

6. They are more trustworthy than our intuition or cultural code.

We live in a paradoxical age where many will say, “Right and wrong is what you decide for yourself,” and yet these same people will rebuke others for violating any number of assumed commands. As a culture, we may be quite free and liberal when it comes to sex, but we can be absolutely fundamentalist when it comes to the moral claims of the sexual revolution. The old swear words may not scandalize us any longer, but now there are other words—offensive slurs and insults—that will quickly put someone out of polite company. We are still a society with a moral code.

7. The church’s most important instruction has been based on them.

The church has historically put the Ten Commandments at the center of its teaching ministry, especially for children and new believers. For centuries, catechetical instruction was based on three things: the Apostles’ Creed, the Lord’s Prayer, and the Ten Commandments.

In other words, when people asked, “How do we do discipleship? How do we teach our kids about the Bible? What do new Christians need to know about Christianity?” their answers always included an emphasis on the Ten Commandments.

8.They are critical to our understanding of the rest of the Old Testament law.

While it’s true that the Bible doesn’t say to print the Ten Commandments in boldface, we shouldn’t undersell their special stature in ancient Israel. They came from God as he spoke to the people face-to-face (Deut. 5:1–5), and they came from Mount Sinai amidst fire, cloud, thick darkness, and a loud voice (Deut. 5:22–27). Exodus 20 marks a literal and spiritual high point in the life of Israel. It’s no wonder the tablets of the law, along with the manna and Aaron’s staff, were placed inside the ark of the covenant (Heb. 9:4)

There are many more laws in the Old Testament. But these first ten are foundational for the rest. The Ten Commandments are like the constitution for Israel, and what follows are the regulatory statutes.

9. They are central to the ethics of the New Testament.

Think of Mark 10:17, for example. This is where the rich young ruler comes to Jesus and asks, “What must I do to inherit eternal life?” Jesus says to him, “You know the commandments.” Then he lists the second table of the law, the commandments that relate to our neighbors: “Do not murder, Do not commit adultery, Do not steal, Do not bear false witness, Do not defraud, Honor your father and mother” (v. 19).

Jesus isn’t laying out a path for earning eternal life. We know from the rest of the story that Jesus is setting the young man up for a fall, because the one command he obviously hasn’t obeyed is the one command Jesus skips—do not covet (vv. 20–22). But it is noteworthy that when Jesus has to give a convenient summary of our neighborly duties, he goes straight to the Ten Commandments.

10. They are still relevant for Christians today.

We still need the Ten Words handed down at Sinai. Have they been changed in some respects by the coming of Christ? For sure—transformed but not trashed. We can no longer keep the Ten Commandments rightly unless we keep them in Christ, through Christ, and with a view to the all-surpassing greatness of Christ. As new creations in Christ, the law is not only our duty but also our delight. If we want to love Christ as he deserves and as he desires, we will keep his commandments (John 14:15).