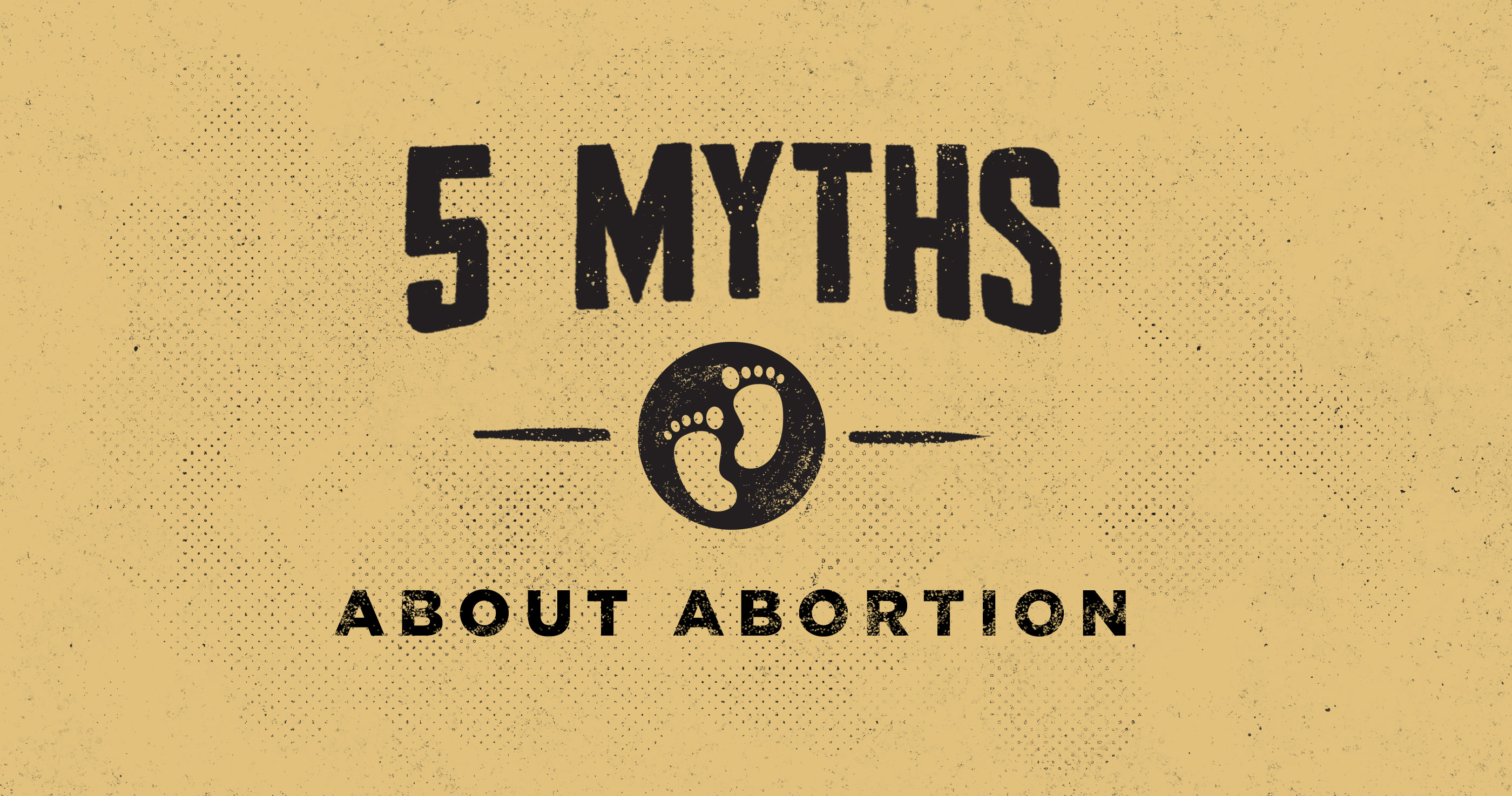 Myth #1: Christian pro-lifers impose religious arguments on a pluralistic society and thus violate the separation of church and state.

The “religion” objection is a dodge, not a refutation. As Francis J. Beckwith points out1, arguments are either true or false, valid or invalid. Calling an argument “religious” is a category mistake like asking, “How tall is the number three?” Pro-lifers argue that it’s wrong to intentionally kill innocent human beings, abortion does that, therefore, it's wrong. If critics can refute that argument with evidence, go for it. But it won’t do to dismiss it with a label.

Moreover, pro-life Christians aren’t imposing their views any more than abolitionist Christians were imposing theirs or the Reverend King was imposing his. Rather, we’re proposing them in hopes we can persuade our fellow citizens to vote them into law. That’s how a constitutional republic like ours works. We’re not looking to establish a theocracy we impose on non-Christians, only a more just society for the weakest members of the human family.

Indeed, it is no more religious to claim a human embryo has value than to claim it doesn’t. Both claims answer the same exact question: What makes humans valuable in the first place? That is an inherently religious question with no neutral ground. Either you believe that each and every human being has an equal right to life or you don’t. The pro-life view is that humans are intrinsically valuable in virtue of the kind of thing they are. The abortion-choice view is that humans have value only because of an acquired property like self-awareness or sentience. Notice that both positions—pro-life and abortion-choice—use philosophical reflection to answer an inherently religious question, What makes humans valuable in the first place? Thus, if the pro-life view is disqualified for asking religious questions, so is the abortion-choice one. At issue is not which view of abortion has religious underpinnings and which does not, but which view of human value does a better job of accounting for human rights and human dignity.

What makes humans valuable in the first place? That is an inherently religious question with no neutral ground.

Myth #2: Men have no moral authority to speak on abortion.

To assert that only women can speak on abortion is to commit the ad-hominem fallacy—that is, attacking the person rather than the argument he or she presents. It also raises a troubling question: Which women get to speak? As Christopher Kaczor writes in The Ethics of Abortion, there is no such thing as a “woman’s perspective” on abortion anymore than there is a male perspective or a brown-eyed persons perspective. Indeed, feminists, let alone women in general, have no single perspective on the issue. This is true even for feminists who support abortion. For example, feminist Naomi Wolf calls abortion “a real death” while feminist Katha Pollitt thinks it no different than vacuuming out your house. In short, while gender perspectives on abortion help us understand personal experience, they are no substitute for rational inquiry. Rather, it is arguments that must be advanced and defended and those arguments stand or fall on their merits, not the gender of those espousing them. After all, pro-life women make the same arguments as pro-life men.

Even in a “Me-Too” culture, Christian men have a unique opportunity to model strength and grace, even on an issue that’s wounded many women. Suppose a pro-life apologist is told his views are hurtful to women. He does not get defensive. Instead, he graciously redirects the exchange back to the status of the unborn. He says: “You make an interesting point. If the unborn are not human, I am indeed unjustly taking away a woman’s freedom to abort. I’m also unfairly imposing my views on her. Worse still, I’m forcing her to dramatically alter her life. You’re right about that. However, if the unborn are human, can you see things from my point of view? That is, if you shared my position that abortion intentionally kills an innocent human being, wouldn’t you do everything you could to stop it? Wouldn't you want unborn humans protected in law? Of course, I realize you don’t share my position, so my point here is really quite modest: The issue that separates us is not that I hate women and you love them. What separates us is that I believe the unborn are human beings and you don’t. That’s the issue I hope we can discuss during our time together.”

Myth #3: The only way to end abortion is to preach the gospel because outside of Jesus, pro-life arguments make no sense to unbelievers.

At Life Training Institute, we include the gospel in virtually every pro-life presentation, but not because it’s a necessary condition for understanding pro-life arguments. We do it because post-abortion men and women have but one fix for their sinful choices: Jesus, their perfect substitute, who bore the wrath of God in their place. Instead of saying that outside of Jesus, pro-life arguments make no sense, we should say, “Outside of Jesus, forgiveness of sin makes no sense.”

Of course, even when pro-life presentations contain gospel, many are not awakened spiritually. But some are awakened morally. And that’s enough to help save children. Former abortionist Bernard Nathanson presided over 60,000 abortions before becoming pro-life while still an atheist. Only later did he embrace theism. Amherst philosopher Hadley Arkes, a recent convert to theism, wrote brilliant defenses of the pro-life view and devastating critiques of moral relativism as an agnostic Jew. Meanwhile, syndicated columnist and atheist Nat Hentoff courageously defended the pro-life view his entire life, but never converted to Christianity.

On my end, I’ve spent twenty-seven years doing pro-life apologetics presentations in Catholic and Protestant high schools, secular universities, and worldview conferences. I’ve seen compelling pro-life arguments work with inner-city youth who don’t know Jesus and with suburban youth who do (and vice versa). My speaking team reports the same results. What works best is a persuasive pro-life apologetic that awakens moral intuitions and engages the mind. Pictures of abortion change how people feel about it. Facts and arguments change how they think. Both are vital in changing how they ultimately behave. In short, the case we present is accessible to anyone with an open mind, Christian or not.

Myth #4: Pro-life advocates must take on a broader “whole life” agenda to legitimize their efforts.

Why should anyone believe that because you oppose the intentional killing of an innocent human being, you must, therefore, take responsibility for all societal ills?

As Christians, we will care about many issues, not just a few. However, it does not follow that the operational objectives of the pro-life movement must be broad and inclusive as well. Imagine saying to the American Cancer Society, “If you were truly against disease, you’d fight other illnesses as vigorously, as passionately, as loudly as you do cancer!” Or, consider the gall of telling Black Lives Matter, “You don’t care about all Black lives, only those killed by police brutality.”

Indeed, why is the “whole-life” argument never used against other groups who target specific forms of injustice? If an inner-city daycare ministry only receives kids afternoons on school days, do we blast them for not operating 24/7?

As my colleague Dr. Marc Newman points out, “Individuals and organizations that make it their exclusive mission to save these human beings from a culture hell-bent on butchering them have nothing to apologize for. They don’t need additional causes; they need additional support.”

Myth #5: The call of the church is not social issues like abortion, but discipleship.

True, the primary responsibility of the local church is to make disciples (Matthew 28). What does that mean? And does abortion relate to that disciple-making responsibility? Consider the following argument:

P1: In the Great Commission (Matthew 28), Christ gives the church the command to go make disciples.
P2: Making disciples means “teaching them to obey” all that Christ commands.
P3: One of those commands is that we are not to shed innocent blood (Ex.23:7; Prov.6:16-17; Mt.5:21).
P4: Abortion is the shedding of innocent blood, the intentional killing of an innocent human being.
Therefore,
C: Abortion relates to the disciple-making responsibilities of the local church.

In short, biblical teaching on abortion is not a distraction from the mission of the church, but fits within it. Instead of ducking the issue, local churches should equip believers to do four things:

Ethics and Moral Reasoning
C. Ben Mitchell
Crossway is a not-for-profit Christian ministry that exists solely for the purpose of proclaiming the gospel through publishing gospel-centered, Bible-centered content. Learn more or donate today at crossway.org/about.