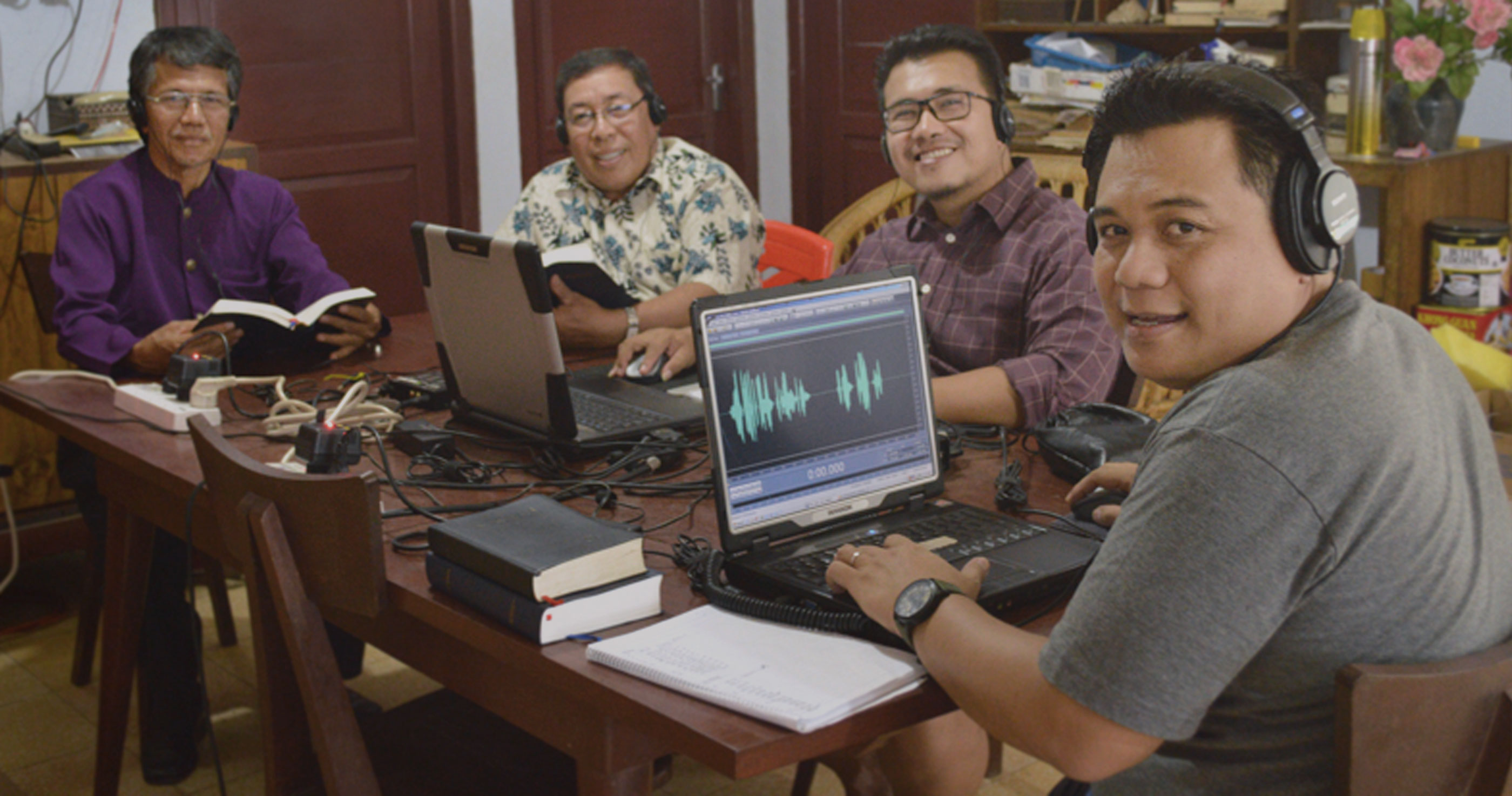 As a not-for-profit Christian ministry, Crossway works in partnership with other like-minded ministries around the world to see the gospel of Jesus Christ go forth and to equip the global church with ESV Bibles and other Bible-based resources.

Getting God’s Word Out

Faith Comes By Hearing has the mission to “get God’s word to every person and cover the world with the word” by creating and distributing Bible recordings and programs in the languages of people worldwide. They provide the tools and technology, and thanks to partnerships worldwide, offer Scripture recordings in 1,315 languages spoken by 6.1 billion people.

We talked with president and cofounder Jerry Jackson about the history of the ministry and the hopes and vision for the coming years.

When was Faith Comes By Hearing founded and what prompted it?

Hosanna was founded by missionaries Jerry and Anet Jackson in 1972 as a tape-lending library and later a ministry that produced audio Bible recordings, primarily in English, for American churches. In 1989, a Bible listening program called Faith Comes by Hearing began among the churches that used Hosanna’s recordings of Scripture; and just six years later in 1995, Hosanna itself became known as Faith Comes by Hearing. Over time, the ministry began to record languages other than English, leading to the idea that with the support and partnership of ministries, Bible organizations, churches, and generous donors, Faith Comes by Hearing could cover the entire world with the word of God in audio.

What is the heart of your vision and strategy for Faith Comes By Hearing?

The Bible has the supernatural power to transform lives. Faith Comes By Hearing’s mission is to record and provide God’s word to everyone everywhere in their heart language.

An estimated 70% of the world’s population are oral communicators and learners or cannot read well enough to understand the Bible. For this reason, Faith Comes by Hearing provides audio and video recordings of Scripture and makes these recordings freely and widely accessible by way of audio Bibles and other technological means. By getting God’s word to every person, we can fulfill the Great Commission within our lifetime.

In what languages do you have recordings and what are a few ways they are used around the world?

In what ways can people become involved in your mission?

Because Faith Comes By Hearing is a 501(c)(3) nonprofit, we 100% rely on partnership with generous donors, churches, and other ministries/organizations to further the spread of the gospel in the languages of the world and fulfill the Great Commission. Donating is way you can help get God’s word to every person.

Another great way to get involved is through the Every Church Every Village (ECEV) program. Churches can take a free audio Bible on their next short-term mission trip!

Vision 2033 is an expansion in scope to match God’s promise to John in Revelation 7: Members from every nation, tribe, people, and language will stand before Christ’s throne on the Last Day. Jesus’s commission in Matthew 28 involves making disciples of all nations in the authority of his name.

Believing that the Bible has supernatural power to transform lives, and recognizing that an estimated 70% of the world’s population are oral learners or cannot read well enough to understand the Bible, Faith Comes by Hearing partners with like-minded ministries to record Scripture in every language of the world that needs it by the year 2033 and make these recordings freely available by every means possible.

In what way are you using the ESV and why did you decide to partner with Crossway in using it for recordings?

The ESV Bible came to us during a time of transition with another English version we had recorded and used widely for years. We needed a quality English translation that we could wholeheartedly promote and establish as our flagship English audio Bible. Crossway created a unique and generous agreement that gave us the confidence to invest our recording and distribution resources. This partnership with Crossway has been a testimony of two Bible-cause ministries walking in trusting agreement to the glory of his name.

What is one encouraging recent development or situation where you’ve seen the Lord using the work you’re doing?

So much! Of course, people around the world are hearing God speak their language, often for the first time. This can never be understated. But aside from that constant blessing, this is an incredible season that God has been using to spread his word—a season of unprecedented unity in which organizations around the world are serving each other at great cost to themselves for the sake of the kingdom.

For example: Faith Comes By Hearing’s Gospel Film of the book of Mark is, in English, about two hours; whereas the average recording length of Mark in other languages is two hours and forty-five minutes—too long to be used in the film. How could this be overcome? We eventually made an audacious request to our partner LUMO: Would they remaster their films to account for these longer languages?

In the business world, no one would've done this. But LUMO sacrificially invested hundreds of thousands of dollars to extend not only the Mark film, but the other three Gospels as well, so our other language recordings could be accommodated. What a testimony to the power and necessity of kindred relationships!

Another example: Faith Comes By Hearing’s Gospel Film overlaid with the English Standard Version uses the Hear the Word single-voice recording, generously provided to us by Crossway, instead of our own dramatized multivoice audio. Because of its wonderful high production quality, Crossway’s audio of the ESV provides a clear, powerful narration for the films.

Each organization has particular God-given strengths, giftings, passions, and competencies, and the root of all this is trust. There are countless examples, but the point is, trust helps partnerships not just survive, but thrive when inevitable challenges come. The evidence is clear: Serving each other in kingdom work gets the job done.

Jacob Lee lives in Uganda and works with a church and missions organization to equip pastors and distribute books and Bibles to help further the gospel of Christ in Africa.

We are overjoyed to be able to partner with organizations across the globe who share our passion to bear witness to the gospel of Jesus Christ.