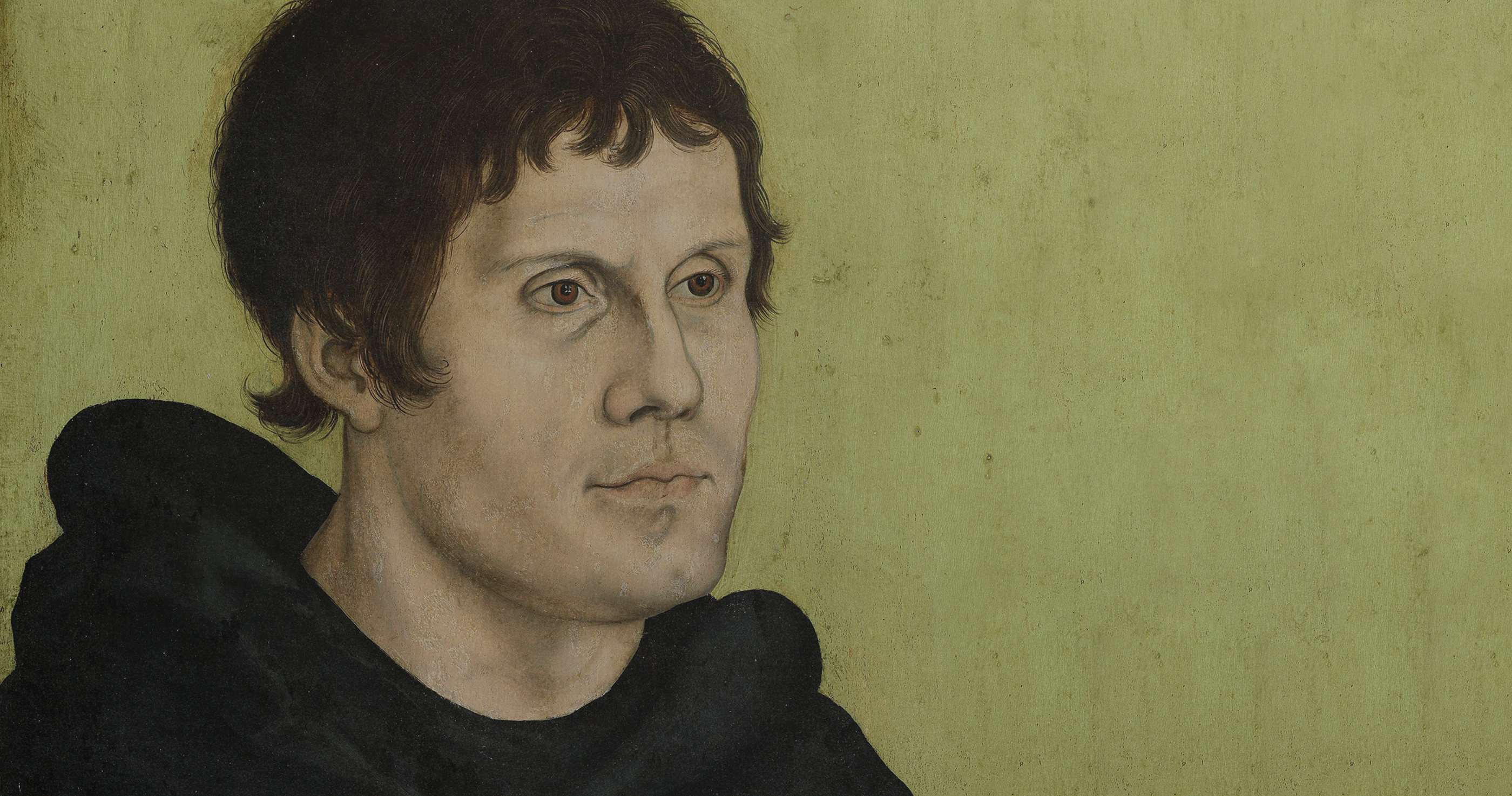 On April 14 [1521], Luther arrived in Frankfurt, and the next day he went to Worms. Luther trusted that he “would enter Worms also against the will of all the gates of hell and the powers of the air.”1 Instead, he first heard a trumpet sound. When Luther and his companions approached the city gates on April 16 around ten in the morning, trumpets from the church tower announced his arrival. In front of the city gate, a delegation of the Saxony nobility waited to lead him to the place where he would be staying. Along the streets approximately two thousand people greeted him loudly, much to the annoyance of the papal delegation. Pictures of Luther sold so well that printers could not meet demand. There were even pictures of Luther with a dove above his head, as a sign of the Holy Spirit, who was leading him. People wanted to touch him, as if he were an image of the saints or a relic. The entry into Worms, according to critics, was so well organized that most people would have been reminded of Jesus’s entry into Jerusalem.

Luther was lodged at the Johanniterhof, where part of the Saxon delegation lived. The emperor would have preferred to have him lodged in the neighborhood of the Habsburgers, to keep an eye on him, but the Saxons believed that was too risky and enforced their own wishes. Because of the imperial diet, the town lacked sufficient accommodations for all the travelers, and Luther had to share his room with two others. Almost immediately, he was visited by several rulers, such as the young Philip of Hesse (1504–1567), who would become quite important for the cause of the Reformation.

On the morning of April 17, Luther was informed that at four o’clock in the afternoon he was expected at the palace of the bishop near the church tower, where he would appear before the emperor. He was told no more, because at that time it was still not clear how they were going to deal with this point on the imperial agenda. He hoped that he would at least have an opportunity to explain his vision about justification and discuss the points of disagreement. Because there was still ample time before his four o’clock appointment, he decided to first carry out his pastoral responsibilities and paid a visit to Hans von Minkwitz, a nobleman from Kursachsen who was seriously ill. Luther first heard his confession and then celebrated the Lord’s Supper with him. While he was personally against the individual celebration of the Lord’s Supper if no congregation was involved, he sometimes made exceptions, as in this situation.2

As they had arranged, one of the emperor’s chamberlains picked up Luther at noon. Because the streets were full of people who wanted to see him, he was led via small gardens and alleyways to the emperor. The beginning was awkward; Luther entered with a cheerful expression on his face but soon realized that such behavior contravened protocols for being in the presence of the emperor. Luther was also surprised when Johannes Eck, who was actually in service to the archbishop of Trier but spoke here on behalf of the emperor, asked if all the writings on the table were his. Luther then requested that they be named one by one. When that was done, he acknowledged that he had indeed written them. Immediately, he was asked to retract them. Luther requested time to give this demand consideration, “because it concerns God’s Word, and that is after all the highest in heaven and earth.” Luther did not want to fall under the judgment of Christ, “who said that whoever is ashamed of me on earth, I will be ashamed of him before my heavenly Father and his angels.”3

When he stood before the emperor and appeared to have some doubt, his request for some time to reflect was not surprising. He was standing before the most powerful man in the world, who was surrounded by a large group of powerful people from both the church and the empire. The emperor had just made it clear that for his own health, for that of the entire church, and for that of the whole empire, it would be better if he would quickly recant and then act normally again.

Luther realized that everything he had ever written would have to be retracted with one statement.

Additionally, Luther realized that everything he had ever written would have to be retracted with one statement.4 The lack of communication only increased tensions. The emperor spoke only Spanish and French, while Luther spoke only Latin and German—there was little to say. In reaction to his request for time for reflection, Eck told Luther that he did not have the right to make such a request, because he should have known in advance that he was called here to recant. But the emperor wanted to be merciful and granted him time for reflection until the next day at noon.

Afterward, he immediately left and heard from supporters that his performance had not been impressive. It had been difficult to hear him, and he had not shown a strong defense. When he returned to the inn after his first hearing, toward late afternoon, he wrote a letter, which was as much as he could do since so many people wanted to see and talk to him.

Fortunately, that evening several people dropped in to encourage him for the following day. The next day, Thursday, April 18, was better. In the morning he received a few more visitors, who mentioned that he appeared spirited and healthy again. Around and inside the building where the diet was being held, there was again such a mass of people that Luther had to push himself through them. When he was finally given permission to speak, he excused himself for his behavior the previous day. He explained that he “had not grown up in the courts of rulers but had grown up among monks.” He offered apologies to all those whose position he had not properly respected. Whether he was actually as innocent and simple as he maintained is questionable. In the immediately preceding years, he had had substantial contact with highly placed officials, so that he probably could have known how he should have behaved. Nonetheless, Luther opted to show humility. Subsequently, he explained in German—and afterward, to accommodate the emperor somewhat, in Latin—that it was impossible for him to recant. He added that if he could be “convinced from the Scriptures, from the evangelists and the prophets,” that he was wrong, he would eagerly retract.

Concerning the question whether he would retract all his books, Luther responded by dividing his books into three groups. In the first group he included works of edification on faith and personal piety. Those topics were good for every Christian, and therefore, he could not retract those books. That was also the case with respect to the second group of books, those against the papacy and the wrongs in doctrine and lifestyle in the church. If he would retract those books, he would be reinforcing impiety and supporting godlessness. For a long time already Germany had protested against these problems.

His third group of books had been directed against individuals who supported the papal tyranny. He admitted that here and there he had been too vehement and sharp, but after all, it concerned the name of Christ, and therefore, he could not retract these books either. Luther would not recant any of his work. A comprehensive reaction from Eck followed, which ended in a renewed appeal to retract. Subsequently, they heard Luther’s renowned response:

If, then, I am not convinced by testimonies of Scripture or by clear rational arguments—for I do not believe in the pope or in councils alone, since it has been established that they have often erred and contradicted each other—I am bound by the Bible texts that I have quoted. And as long as my conscience is captive to the Word of God, I cannot nor do I want to retract anything when things become doubtful. Salvation will be threatened if you go against your conscience. May God help me. Amen.5

The words “Here I stand, I can do no other” fit nicely with this address, but they appear only in a later publication. Luther stated, “I am completely willing to retract all errors, and I will be the first to throw all my books in the fire,” but he would do this only if the authorities could provide evidence from the Bible that he had erred.6 He added that he was bound by his conscience and simply could not retract if he did not want to go against God’s will. After that, the hearing was ended.

Outside there was loud cheering among the people, but no one was sure what would happen next. As for Luther, he was so tremendously relieved that he felt like he had won a contest. Once he was back at the inn, he threw his hands in the air like a sprinter who was the first one to cross the finish line and cried out, “I am finished! I am finished!” Several nobles came to visit and thanked and encouraged him. The city, however, was restless. Spanish soldiers in service to the emperor had shouted, “Into the fire with Luther,” which led to fierce protests from the people.7

Whether Luther actually spoke the words “Here I stand, I can do no other” is not terribly important. It was clear that even without these words, there was no way back. The one church would be divided; the one empire would be divided into many states. Banishing Luther from the empire on May 8, 1521, and declaring Luther an outlaw did not change anything either. Many rulers had pledged their support for him, and none of them had any desire to capture Luther. In the meantime, the emperor feared the growing numbers of knights and princes who threatened to revolt. Luther also feared this and was completely opposed to the notion that “force and killing would be used fighting for the gospel.”8 He was convinced that “the world is conquered and that the church is safeguarded only by the Word, and through that Word the church will again be strengthened. The Antichrist will be demolished by the Word, and that without lifting a single hand.”9

This article is adapted from Martin Luther: A Spiritual Biography by Herman Selderhuis.

The Day Martin Luther Was Excommunicated

On January 3, 1521, Luther was excommunicated. The severity of excommunication is not to be underestimated.

What We Can Learn from the Reformation 500 Years Later

The Reformation emphasized preaching the gospel with boldness and clarity.