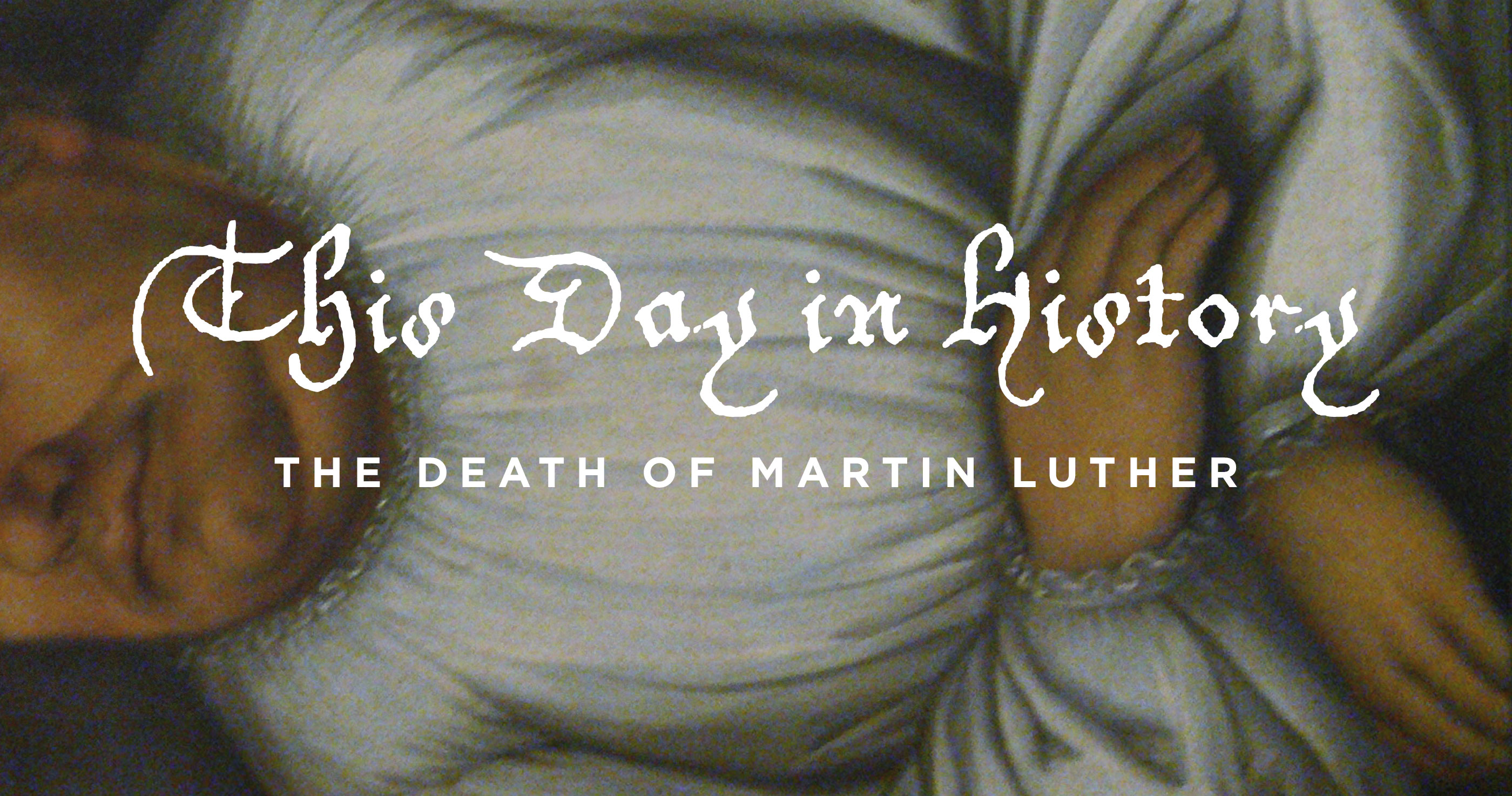 On this day in history, as night turned to day on February 18th, the earthly life of Martin Luther, the most famous man of the sixteenth century, came to an end. Justus Jonas, friend of Luther and senior pastor in Halle and Michael Coelius (1492–1559), court chaplain to the counts of Mansfeld, wrote a detailed account of Luther’s end on February 17.

They were both in attendance during the night. Luther was in Eisleben to reconcile the relationship between the counts of Mansfeld, the brothers Gebhard and Albrecht. They had quarreled about how to resolve their financial problems. Luther’s desire to restore this relationship had much to do with his family in Mansfeld, as they suffered under the strain caused by these debt problems. Luther was not well, and he set out from Wittenberg to Eisleben. Once he arrived, his health problems worsened.

On January 31 and again on February 2, 7, and 14, he preached in the St. Andreas Church in Eisleben, and he participated two times in the celebration of the Lord’s Supper. His last sermon was shorter because Luther was physically unable to carry on, but he did appeal to the people one more time “to remain faithful to Christ’s words and to come to him.”

Conviction Until the End

In previous Table Talk discussions, Luther constantly expressed his conviction that the Word of God not be lost due to persecution. He was equally convinced that he would soon die, saying “When I have returned to Wittenberg, I will lie down in the grave, and I will give the maggots a nice fat doctor to eat.”

Luther’s last preserved writing was found on a table after he had died. The little scrap of paper contained just a few sentences and ended with these words: “We are beggars. That is the truth.”

On February 17, the negotiations concluded. Luther did not feel well and was not involved. Around ten o’clock at night he went to bed and prayed Psalm 31:6, a familiar deathbed scripture: “I hate those who pay regard to worthless idols, but I trust in the Lord.” In that prayer he did not forget to include a brief petition against the pope and the Council of Trent.

That night at one o’clock he was awakened by another heart attack. Though his room had been heated during the night, he still asked his servant to stoke up the fire in his room, suffering from chills related to the heart attack. Massages with warm cloths and heated pillows did not help. Luther suddenly began to sweat, and the people around him (among others, the two counts and their wives and Luther’s sons Martin and Paul) thought that this was a sign of improvement.

Luther knew better and saw this as an omen that he would soon die saying, “It is the cold sweat of death. I will give up the spirit because my illness is getting worse.” With the words of Simeon from Luke 2:29 he spoke to the people standing around his bed saying “I will go in peace and joy. Amen.” Three more times he repeated the words of Psalm 31:6, and then he was silent.

Countess Anna anointed him with healing oils, but Luther did not recover. When he was asked if he could die in faith in Jesus Christ and whether he remained in the doctrine that he had professed in his name, he whispered his affirmation. A little later, around quarter to three, he breathed his last and died, only a few hundred feet from the place where he had been born.

In the morning, Justus Jonas immediately sent a messenger to Elector Johann Frederick, and the latter informed Melanchthon and other professors and pastors in Wittenberg. Melanchthon was lecturing on the letter to the Romans when the messenger entered the lecture hall and gave him the message of Luther’s death. Melanchthon replied with the words of 2 Kings 2:12:
“He who sits on Israel’s chariot, he who has led the church in the world in these last days, has died.”

Afterward, together with Luther´s pastor, Johannes Bugenhagen and Luther´s colleague at the University, Caspar Cruciger, went to inform Katharina that Luther had passed away. She was virtually the very last one to hear that her husband had died.

Luther’s last preserved writing was found on a table after he had died. The little scrap of paper contained just a few sentences and ended with these words: “We are beggars. That is the truth.”

It is quite remarkable that Luther died not in one of the major European cities but in the small town where he was born in 1483. This fact makes clear that Luther did not feel too important to deal with a minor struggle between two hardly influential brothers. Luther wanted to serve anywhere and anyhow. Not even serious illness could keep him from serving—an attitude that can to us be an example of willingness to bring sacrifices for Christ´s church and an example of a lifestyle in which not my pleasure but pleasing God is the chief goal. More than being an example, the death of Luther demonstrates the core of his message.

He could die without fear of hell or purgatory since he died in full assurance on the undeserved grace: the very message which he rediscovered and proclaimed until death. He had learned to look away from himself, his sins, and guilt, and instead to keep the eye of faith on the crucified Christ.

He believed that it matters not what we have done for him but what he has done for us—the essence of Luther´s last written words. When we approach God, we can only hold up empty hands for we have nothing to offer. We beg with a God who is rich in grace and willing to give abundantly.