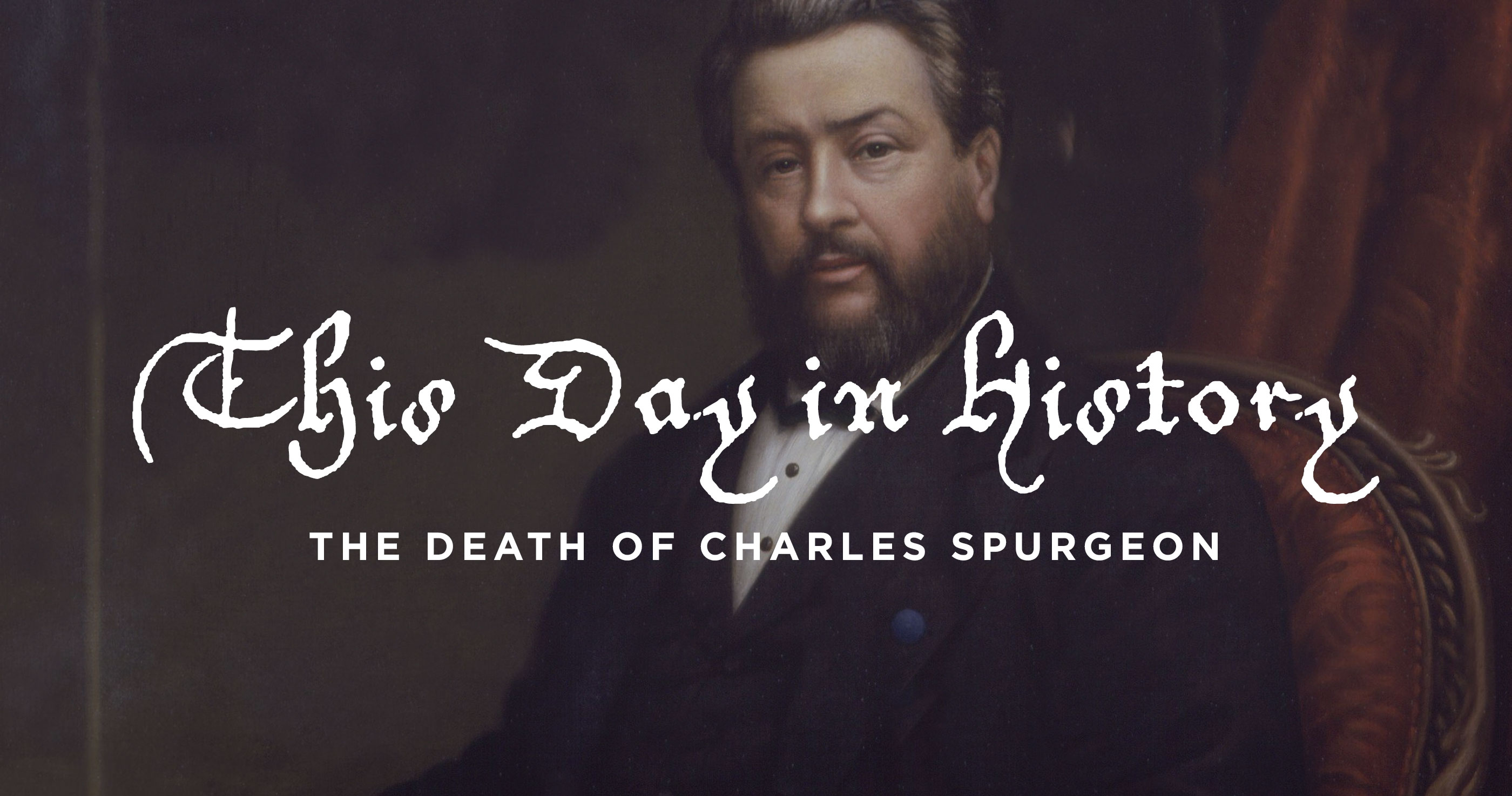 On this day in history, Charles Haddon Spurgeon passed away. It was January 31, 1892, and after twenty-four years of ill health, the ‘Prince of Preachers’ went to be with the Lord, aged just fifty-seven. Spurgeon spent his last days in Menton near Nice in the southeast of France. He had often retreated there in the winter months and found in the balmy warmth and the light a natural reviver for body and mind. Now in the light and glory of heaven, he was free from pain and face-to-face with his Savior.

Eleven days later, crowds lined the streets, hoping to catch a glimpse of the olivewood casket as it made its way through the streets to the Metropolitan Tabernacle. Eighteen years before, Spurgeon had imagined the scene from his pulpit:

When you see my coffin carried to the silent grave, I should like every one of you, whether converted or not, to be constrained to say, “He did earnestly urge us, in plain and simple language, not to put off the consideration of eternal things. He did entreat us to look to Christ.”1

One observer wrote, “Nothing was seen for miles but bared heads, closed blinds, and universal signs of grief and sorrow. It was indeed a memorable scene. What a lesson that Bible-decked coffin preached to its tens of thousands as it passed through their midst!”

From his conversion to his death, looking to Christ crucified for life remained the touchstone of Spurgeon’s own life and ministry.

The Bible atop Spurgeon’s coffin was opened at Isaiah 45:22: “Turn to me and be saved, all the ends of the earth!” Back in January 1850, those had been the words that had first shown Spurgeon the way of salvation as a fifteen year old, haplessly wandering into a small Primitive Methodist chapel in Colchester, England. He had been caught in a snowstorm, and took refuge in the church building, where he saw a “very thin-looking man” go up into the pulpit to preach. Spurgeon had quickly felt that this preacher was “really stupid” since he apparently could not even rightly pronounce the words of his text. Yet after about ten minutes, with only twelve to fifteen people present, the preacher fixed his eyes on Spurgeon and spoke to him directly: “Young man, you look very miserable.” Then, lifting up his hands, he shouted, “Young man, look to Jesus Christ. Look! Look! Look! You have nothin’ to do but to look and live.”

I saw at once the way of salvation. I know not what else he said,—I did not take much notice of it,—I was so possessed with that one thought. Like as when the brazen serpent was lifted up, the people only looked and were healed, so it was with me. I had been waiting to do fifty things, but when I heard that word, “Look!” what a charming word it seemed to me! Oh! I looked until I could almost have looked my eyes away. There and then the cloud was gone, the darkness had rolled away, and that moment I saw the sun; and I could have risen that instant, and sung with the most enthusiastic of them, of the precious blood of Christ, and the simple faith which looks alone to Him.2

Spurgeon’s life was changed, and within months he had preached his first sermon. The following year, he accepted his first pastorate. In 1854, he became pastor of New Park Street, the largest Baptist church in London at the time. The church outgrew its building twice before, on March 18, 1861, the Metropolitan Tabernacle was dedicated.

In his opening sermon at the new church, Spurgeon announced, “I would propose that the subject of the ministry of this house, as long as this platform shall stand, and as long as this house shall be frequented by worshippers, shall be the person of Jesus Christ.”3This was, indeed, the great theme of his preaching and wider ministry. On top of his preaching and pastoral ministry (he preached up to thirteen times a week), he established and oversaw a host of ministries, including a Pastors’ College, the Stockwell Orphanage, seventeen almshouses for poor and elderly women, and a day school for children. He was involved in the planting of 187 churches. Then there was the Evangelists’ Association, established in 1863 to put on services in mission halls, chapels, and the open air. Within fifteen years there were five permanent missions, and hundreds of meetings were being held every year. None of that is yet to have mentioned his books. In print he published some eighteen million words, selling over fifty-six million copies of his sermons in nearly forty languages in his own lifetime.

For forty-two years, then, from his conversion to his death, looking to Christ crucified for life remained the touchstone of Spurgeon’s own life and ministry. He had dedicated his days to entreating all others: “look to Christ.”

Today, preachers and Bible teachers who want to see an effective ministry would do well to hear Spurgeon’s advice, often repeated to his students. He was emphatic that keeping Christ central, prominent, and clear was the reason for the fruitfulness of his ministry. “If I had preached any other than the doctrine of Christ crucified, I should years ago have scattered my audience to the winds of heaven. But the old theme is always new, always fresh, always attractive. Preach Jesus Christ.”4

Spurgeon’s last words from the pulpit, dated June 7, 1891, are a fitting summary of his relentlessly Christ-centred vision.

Depend upon it, you will either serve Satan or Christ, either self or the Saviour. You will find sin, self, Satan, and the world to be hard masters; but if you wear the livery of Christ, you will find him so meek and lowly of heart that you will find rest unto your souls. He is the most magnanimous of captains. There never was his like among the choicest of princes. He is always to be found in the thickest part of the battle. When the wind blows cold he always takes the bleak side of the hill. The heaviest end of the cross lies ever on his shoulders. If he bids us carry a burden, he carries it also. If there is anything that is gracious, generous, kind, and tender, yea lavish and superabundant in love, you always find it in him. These forty years and more have I served him, blessed be his name! and I have had nothing but love from him. I would be glad to continue yet another forty years in the same dear service here below if so it pleased him. His service is life, peace, joy. Oh, that you would enter on it at once! God help you to enlist under the banner of Jesus even this day! Amen.5

Michael Reeves (PhD, King’s College, London) is president and professor of theology at Union School of Theology in Bridgend and Oxford, United Kingdom. He is the author of Delighting in the Trinity; Rejoice and Tremble; and Gospel People.

Morning and Evening
Charles H. Spurgeon
Crossway is a not-for-profit Christian ministry that exists solely for the purpose of proclaiming the gospel through publishing gospel-centered, Bible-centered content. Learn more or donate today at crossway.org/about.