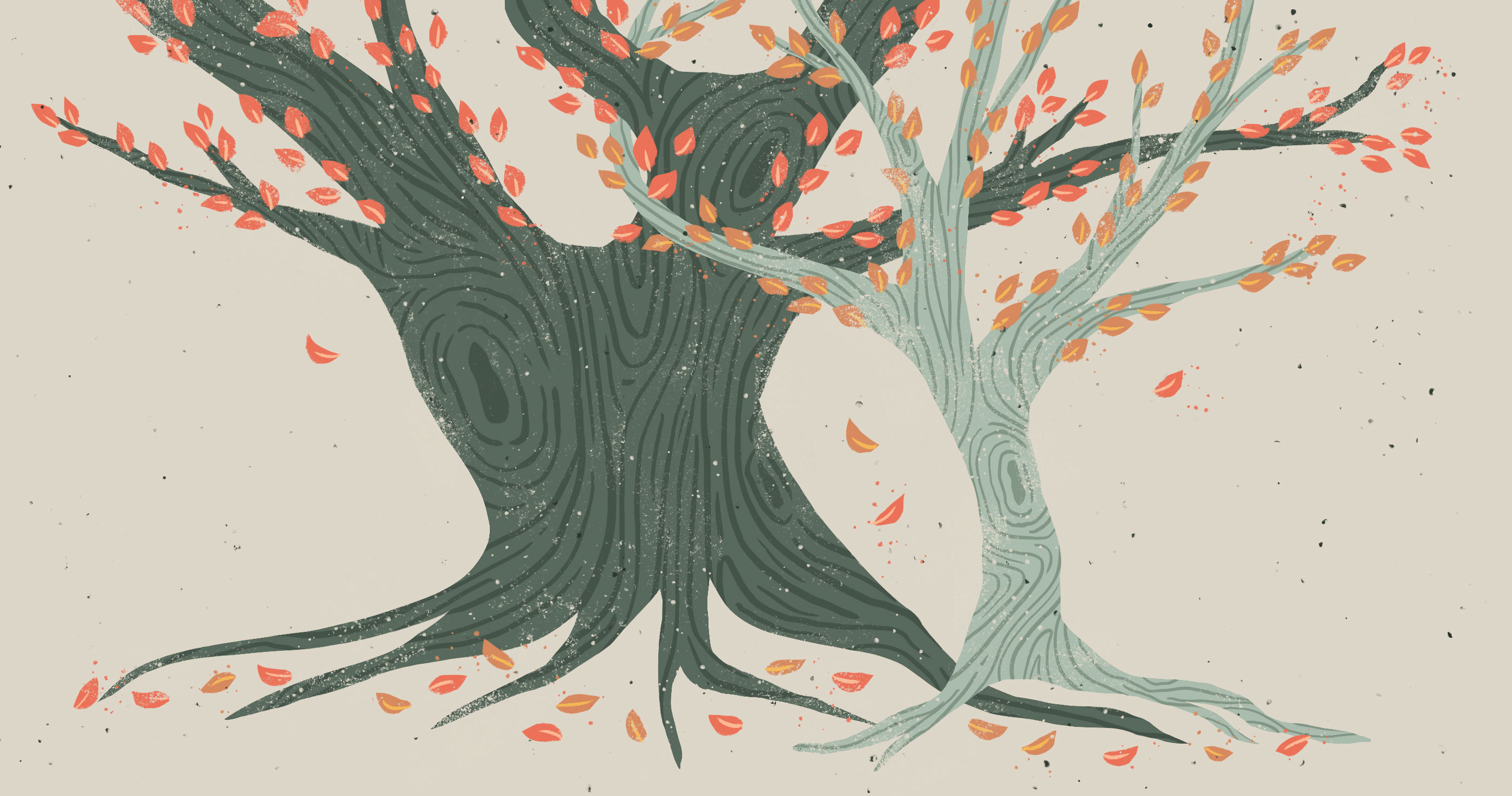 The Meaning of Mentoring

As a little girl, I remember an afternoon I spent playing in the front yard while my Dad was busy picking up sticks and weeding. At one point, he stopped his usual work and went into the garage. He came back with some tools and began doing something I’d never seen him do before. There was a young thin tree that was bent over, suffering from the damaging effects of a storm that had recently blown through. (And, if I remember correctly, it was also suffering from the effects of neighborhood children—myself included—who liked to bounce on its bent-over limb for fun.) He took a rope and tethered the young tree to a much older tree—one that was sturdy and strong, standing straight. When I asked him why he was tying the two trees together, he explained that the older tree could offer support and strength to prevent the younger tree from growing askew. The older tree had withstood years of winds and storms. Just by standing beside the younger tree, it offered stability. 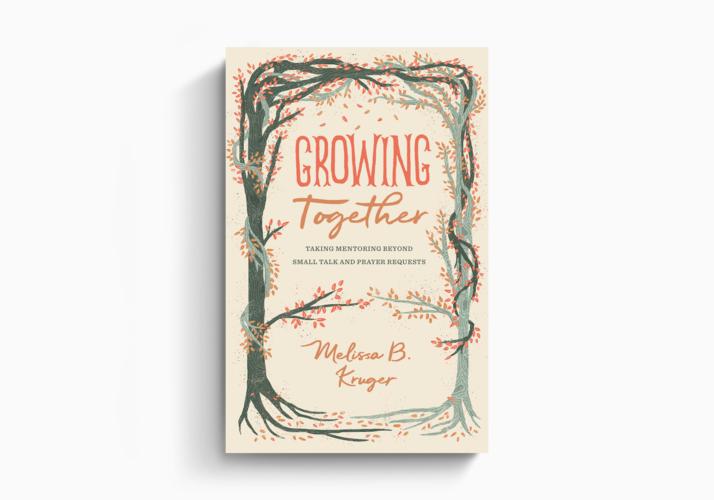 Melissa Kruger offers a springboard for mentoring discussions between mature believers and newer Christians, setting the biblical basis for mentoring from Titus 2 before outlining 11 lessons that guide their time as they grow together.

This image comes to mind whenever I think about discipleship. Essentially, the mentoring relationship is one in which a younger woman is tethered to a more mature believer for a season so that she might grow firm in her faith and be equipped for ministry. Just as the older tree doesn’t make the younger tree grow (the water and the sun do that), the mentor isn’t responsible for the spiritual growth of the mentee (God does that). She’s simply standing beside the younger woman, offering the strength she’s gained as God has grown her through the years.

With this metaphor in mind, the definition I use for mentoring is this:

Mentoring is a discipleship relationship that focuses on equipping younger believers for the work of ministry so that they grow in maturity and unity in the faith with the ultimate goal of glorifying God.

Before Jesus ascended to heaven, he gave his disciples a final command, often called the “Great Commission”:

Jesus came and said to them, “All authority in heaven and on earth has been given to me. Go therefore and make disciples of all nations, baptizing them in the name of the Father and of the Son and of the Holy Spirit, teaching them to observe all that I have commanded you. And behold, I am with you always, to the end of the age.” (Matt. 28:18–20)

Jesus called his followers to go out and make disciples, teaching them to obey all that they had learned from him. Discipleship begins with evangelism, but it doesn’t end there. As we study and learn truths about God, we continually pass on to others what we’ve received. Mentoring is a specific type of discipleship relationship. Through mentoring, an older believer teaches a younger believer how to walk by faith in obedience to God’s commands.

Ephesians 4:11–13 explains the importance of growing in faith for the building up of the church:

He gave the apostles, the prophets, the evangelists, the shepherds and teachers, to equip the saints for the work of ministry, for building up the body of Christ, until we all attain to the unity of the faith and of the knowledge of the Son of God, to mature manhood, to the measure of the stature of the fullness of Christ.

The apostle, prophet, evangelist, shepherd, and teacher have a shared goal in their training: to equip the saints for the work of ministry in hopes of building up the body of Christ. While this passage addresses those in official roles, we’re all instructed to teach one another (Col. 3:16), and women are specifically called to teach other women (Titus 2:3–4).

There are two important aims we can glean from this passage as it applies to mentoring. A mentoring relationship seeks to:

Both of these concepts are vital for well-balanced discipleship. A woman needs to be equipped for ministry as well as actively participate in ministry in order to grow in maturity. A mentor is not just equipping for some imagined future service; she is equipping while she encourages a younger woman in her current ministry.

If either concept of discipleship is neglected, our mentoring can get off-kilter. If a woman is equipped but not participating in ministry, it is easy to become overconfident and self-focused. She quickly forgets why she even needs to be equipped because she doesn’t truly understand how much she doesn’t understand! If you can remember all the way back to high school algebra—often it’s not until we take a test that we realize we’ve been overconfident in our understanding of the material.

Another problem arising from a woman being equipped without actively engaging in ministry is that she quickly loses interest in training. If a sports team only practiced but never participated in a real game, players would quickly get bored and lose interest in working diligently while in practice. The desire to train is actually increased by playing in the game and understanding areas of necessary growth. A key means of growth in the spiritual life involves actively participating in some form of ministry.

On the other side of the coin, if a woman only involves herself in ministry and never takes the time to be equipped, she may find herself struggling in different ways. She’s equivalent to the sports team that never trains but only shows up for the game. She wears out quickly and has little stamina. She’s unprepared for certain situations because she hasn’t taken time outside of the game to consider the unexpected. In ministry the unequipped will quickly burn out and face exhaustion. Her external service lacks the internal strength and understanding needed to persevere well in her ministry to others.

Both sides of the definition—being equipped and actively participating in ministry—are vital for full-orbed discipleship. For women, Paul also gives a specific encouragement for mentoring, in his letter to Titus. He writes:

Older women likewise are to be reverent in behavior, not slanderers or slaves to much wine. They are to teach what is good, and so train the young women to love their husbands and children, to be self-controlled, pure, working at home, kind, and submissive to their own husbands, that the word of God may not be reviled. (Titus 2:3–4)

Paul is not saying, “Only mentor women who are married and have young children.” He also never says that mentors must be married and have children of their own. Jesus’s final words in the Great Commission call us to make disciples, regardless of their gender, age, or marital status. Paul is simply giving a special exhortation to older women as they mentor younger women who are married with children. It’s tempting as a young wife and mom to believe that work in the home is insignificant in comparison to worldly accolades or more visible forms of ministry. Older women can encourage younger women by reminding them that the home is a vital place to bear fruit. Notice how many of the fruit of the Spirit are mentioned in the Titus 2 passage: goodness, love, self-control, and kindness. All believers should exhibit these fruit as they grow in faith. Paul is emphasizing—but not limiting—the importance of bearing these in the home.

For Unity and Maturity

Ephesians 4:11–13 also helps us understand that mentoring involves more than simply developing a friendship with an older or younger woman. It is designed to bring unity in the faith, knowledge of Christ, and maturity that overflows into a secure and stable trust in God that withstands the enemy’s attacks. Unity is built as we grow together in truth and serve together in love. Maturity produces stability “so that we may no longer be children, tossed to and fro by the waves and carried about by every wind of doctrine, by human cunning, by craftiness in deceitful schemes” (Eph. 4:14).

Over time, the younger woman’s faith strengthens so that she is no longer tossed back and forth by various teaching. She’ll be able to discern what is best because she’s been equipped. She’ll have situational wisdom because she’s participated in the work of ministry. Firmly rooted, she can stand beside others, helping them grow in godliness.

As we mentor, it’s important to keep our primary goal in mind. Ultimately, we want to help a younger woman grow in Christlikeness so that she glorifies God in all she does. We’re not attempting to make others in our own image, crafting them to be like us. My goal isn’t to make disciples of Melissa; I’m making disciples of Jesus.

John the Baptist understood his role and rejoiced when people left him to follow Jesus, saying, “He must increase, but I must decrease” (John 3:30). Our goal is to point people to Jesus, saying, “Go follow him. He’s the source of all that is good!” As a younger woman beholds her King, she increasingly transforms into his likeness (2 Cor. 3:18).

Practically, this concept allows the mentor to work with diligence as well as rest with confidence. Her labors join with God’s purpose for the women she mentors. By pointing another woman to Jesus, she knows her work is not in vain. She rests with confidence because the work is ultimately God’s, not her own. God forms and fashions his child in his timing. The mentor is freed from the pressure of perfection, because she is not the ultimate source of growth.

She is supporting the work God is already doing. To refer back to our original metaphor, one tree cannot make another tree grow. It simply stands beside a younger tree and offers its strength for a season.

In Titus 2, Paul speaks to a variety of believers regarding their growth in righteousness. He explains the threefold purpose for equipping the saints for the work of ministry: God’s word is upheld, the church is praised, and the gospel is adorned. The goal of mentoring is much larger than our personal happiness or growth. The goal is God’s glory.

Ultimately this greater goal leads to our personal joy and growth, but it is a by-product of a much more important desire: God’s name being declared holy in all the earth. This longing is the first request that Jesus teaches us to pray in the Lord’s Prayer (“Hallowed be your name,” Matt. 6:9), and it will be our greatest joy in all eternity. When God is rightly glorified, all will be well.

This article is adapted from Growing Together: Taking Mentoring beyond Small Talk and Prayer Requests by Melissa B. Kruger.

Melissa B. Kruger (BA, University of North Carolina at Chapel Hill) serves as director of women’s initiatives for the Gospel Coalition. She is the author of multiple books, including The Envy of Eve; Walking with God in the Season of Motherhood; and Wherever You Go, I Want You to Know. Her husband, Michael, is the president of Reformed Theological Seminary, Charlotte, and they have three children.

Why Mentoring Is Better than Asking Alexa

In our digital age, it’s helpful to remember the importance of real-life relationships and the benefits of older believers in the faith who can offer us wisdom, presence, and pursuit.

Older women are to be faithful examples as they teach younger women. As you think about Paul's message to older women, consider these questions from the book of Titus.

What are some core aspects that should be in place in every mentoring relationship, and how can we build relationships that actually help others follow Christ?

6 Questions about Finding a Mentor

We need mature believers to help us resist sin, grow in godly affection, and to persevere in faith. 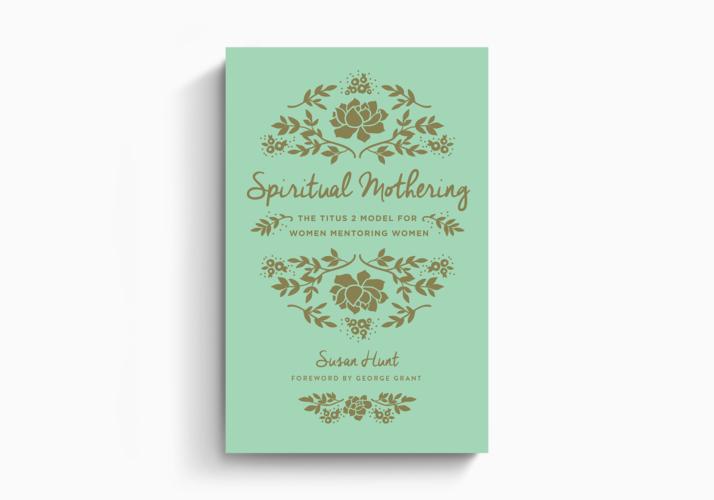 Treasuring Christ When Your Hands Are Full
Gloria Furman
Crossway is a not-for-profit Christian ministry that exists solely for the purpose of proclaiming the gospel through publishing gospel-centered, Bible-centered content. Learn more or donate today at crossway.org/about.