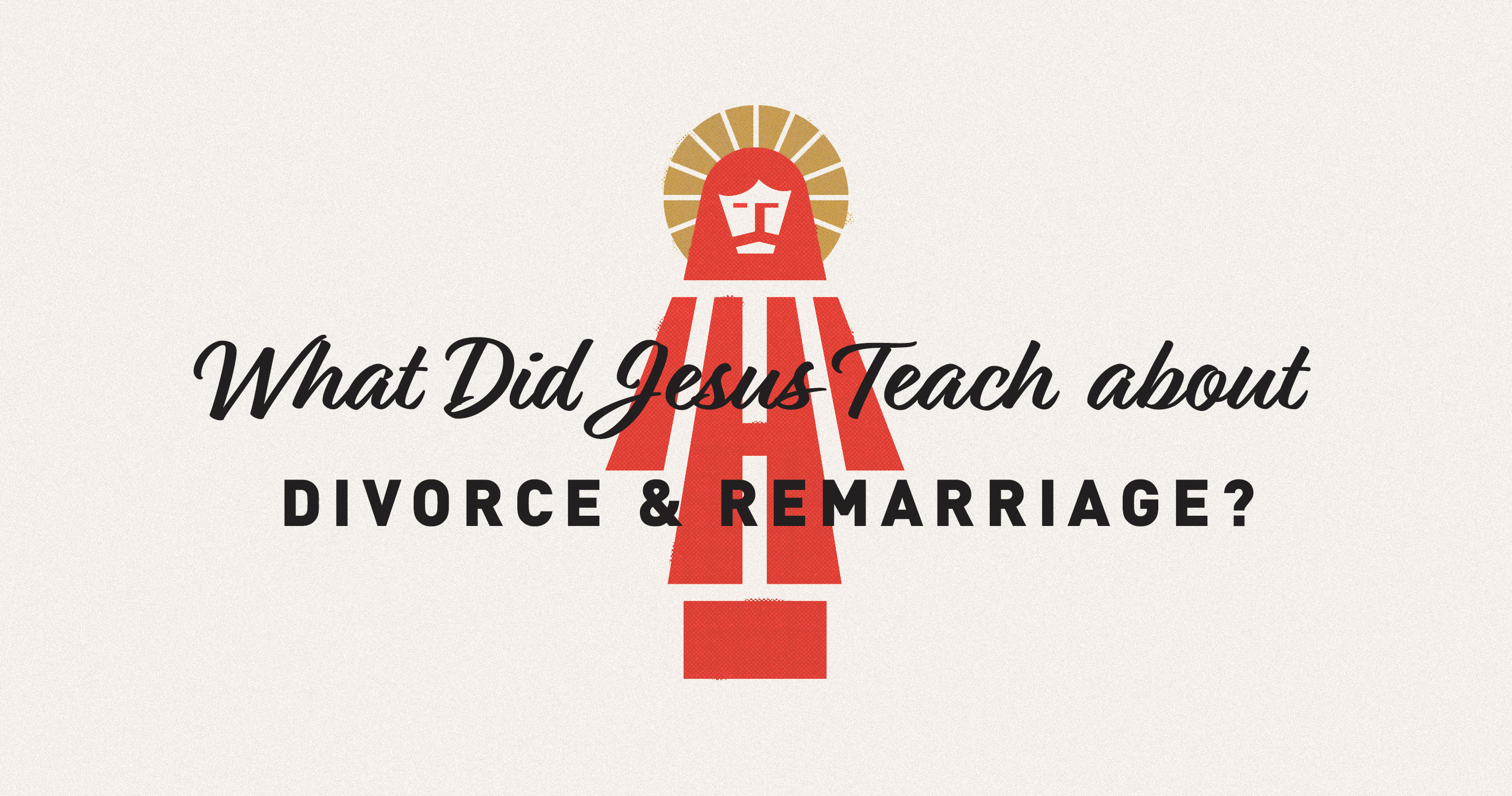 Despite the fact that the Mosaic law included provisions regulating divorce, the Old Testament makes it clear that divorce falls short of God’s ideal (Mal. 2:16). It is not surprising, then, that when asked about divorce and remarriage, Jesus took his listeners all the way back to the beginning, reminding them that God created humanity as male and female (Gen. 1:27) and stipulated that the man, upon marriage, was to leave his father and mother and to be united to his wife (Gen. 2:24) in a one-flesh union before God that people ought not to break: “So they are no longer two but one flesh. What therefore God has joined together, let not man separate” (Matt. 19:4–6; Mark 10:8–9).

The response of Jesus’s audience makes clear that they thought the Mosaic stipulations had in effect superseded God’s original purposes at creation. After all, given the theological milieu of the day, in their thinking, why else would divorce have been regulated in Mosaic law (Deut. 24:1–4)? According to Jesus, however, the Mosaic statutes were interposed not to replace the Creator’s original intent but merely in recognition of the reality of human hardness of heart (Matt. 19:7–8; Mark 10:5; see Matt. 5:31–32). In fact, marriage was intended as a lifelong, faithful union of a man and a woman.

Marriage and the Family

During a time of cultural ferment and crisis with regard to marriage and the family, this book provides a timely solution, speaking directly to current issues and explaining the Bible’s teaching on marriage and family.

Recognizing the high standard set by Jesus, his original followers respond, finding his view unduly restrictive, “If such is the case . . . it is better not to marry” (Matt. 19:10). Jesus, brushing aside their objection, replies that while a few may indeed have the gift of celibacy (Matt. 19:11–12), God’s original ideal for marriage still stands. Some argue that the disciples’ response proves that Jesus’s standard must have been even stricter than Shammai’s “divorce on the grounds of adultery” view; the disciples’ reaction proves that Jesus advocated a “no divorce once the marriage has been consummated” position.1

Yet the above arguments remain largely inconclusive, especially since the disciples’ reaction was surely influenced by their context and presuppositions. Like many of their Jewish contemporaries, Jesus’s followers may have assumed a somewhat more lenient standard—perhaps they even assumed that Jesus’s standard was more lenient based upon his compassionate treatment of the adulterous woman mentioned in John 7:53–8:11—and consequently were reacting against Jesus’s severe-sounding pronouncement. Also, while contemporary Judaism required divorce in the case of sexual immorality, the text seems to indicate that Jesus merely permitted it (thus implying the need to forgive). That Jesus’s standard regarding divorce was higher even than that of the conservative school of Shammai may therefore adequately account for the disciples’ horrified reaction to Jesus’s teaching in Matthew 19.2

Much discussion has centered on the one ostensible exception made by Jesus in which case divorce may be permissible. This exception, mentioned in both Matthew 5:32 and Matthew 19:9, stipulates that divorce is illegitimate “except for marital unfaithfulness” (NIV1984) or “sexual immorality” (ESV; ISV; NKJV; HCSB; TNIV; NIV). The parallels in Mark 10:11–12 and Luke 16:18 do not mention the exception, which has led some to argue that Jesus never actually made the exception but that Matthew (or someone else) added it at a later point. Even if this were the case, however (which is unlikely), the “exception clause” would still be part of inerrant, inspired Scripture and thus authoritative for Christians today.

Of those who maintain that Jesus did utter the exception, some endeavor to bring the Matthean exception clause into conformity with the absolute statements in Mark, Luke, and Paul by contending that those passages, rather than Matthew, ought to be the ultimate point of reference. Others are reluctant to subsume the Matthean exception clause too quickly under the absolute statement found in Mark, Luke, and Paul, and argue that both sets of passages ought to be studied in their own right to appreciate Jesus’s teaching on the issue at hand.

The incident recorded in Matthew 19:3–12 takes its point of departure from the Pharisees’ question, “Is it lawful to divorce one’s wife for any cause?” (NIV: “for any and every reason”; Matt. 19:3; see Matt. 5:31).3 As at other occasions, Jesus’s opponents seek to involve him in contradiction or otherwise present him with the apparent dilemma of choosing between opposing viewpoints. Indeed, it seems that the phrase “tested him” in Matthew 19:3 (see Mark 10:2) indicates that the religious leaders were trying to get Jesus to choose between competing theological schools as well as to put Jesus in jeopardy with Herod Antipas, just as John the Baptist had suffered for his denunciation of Herod’s illicit union with Herodias, his brother Philip’s wife (see Matt. 4:12; Matt. 11:2–3; Matt. 14:3–4; Mark 6:14–29).4

Marriage was intended as a lifelong, faithful union of a man and a woman.

The Pharisees’ question, then, brings into play the views held by the different rabbinic schools in Jesus’s day, as discussed above. Assuming that Jesus himself uttered the “exception clause,” how does Jesus align himself with or differ from the rabbinic schools of his day? Clearly, Jesus’s view was infinitely stricter than that advocated by the school of Hillel, which held that divorce was permissible “for any cause” (see Matt. 19:3). On the surface at least, Jesus’s view is much closer to that of the school of Shammai, which restricted legitimate divorce (with the possibility of remarriage) to marital unfaithfulness. However, as was previously discussed in conjunction with the disciples’ reaction to Jesus’s teaching, in contrast to Shammai, it seems that Jesus only permitted divorce in the case of porneia while first-century Judaism required it.5

What is more, in a very important sense, Jesus’s reply transcends the legalistic squabbles between those two rabbinic schools and goes to the very heart of the matter. Essentially, Jesus, in good rabbinic style, shifts the Old Testament warrant from one given passage (Deut. 24:1–4) to an earlier set of passages (Gen. 1:27; Gen. 2:24) and hence relativizes the (chronologically) later reference as merely a concession that in no way mitigates the abiding principle established by the foundational texts. Thus, by focusing on the original design of marriage in God’s plan, Jesus teaches his followers the true meaning of marriage. Not only does he stress the permanence of marriage as a divine rather than merely human institution, but he contends that divorce is fundamentally at odds with God’s purpose in creation.

Divorce and remarriage to both men and women (see esp. Mark 10:11–12) is nothing less than revolutionary. Despite regulations in the Mosaic law that stipulated equal treatment of men and women with regard to divorce (Lev. 20:10–12), in Old Testament times a double standard prevailed according to which women were required to be faithful to their husbands (or punishment ensued) while the standards for men were considerably more lenient. In Jesus’s teaching, however, conjugal rights were set on an equal footing. Thus Jesus taught that lust for other women in a man’s heart already constituted adultery (Matt. 5:28), which implies that extramarital affairs are equally wrong for men and women.6

In light of the above discussion, it becomes evident that the key issue in understanding Jesus’s teaching on divorce and remarriage is the meaning of the term porneia, for this is the pivotal term in the “exception clause” uttered by Jesus. There is no universal agreement among Bible-believing Christians as to the exact meaning of porneia, yet the suggestions offered by scholars can easily be grouped into one of three competing views.

Rather than championing a particular position in response to the above views, we would like to suggest several parameters for shaping one’s view of Jesus’s teaching on divorce and remarriage. First, it is important to affirm that the word porneia is a general term for sexual sin. The exact meaning of porneia is always informed by the context in which the word occurs; yet the term porneia always refers specifically to sexual sin. We draw attention to this fact in order to make the point that one cannot derive a doctrine of nonsexual “no fault” divorce from Jesus’s use of the word porneia.

Second, given the divine design of the institution of marriage, the Old Testament teaching on divorce and remarriage, and the unambiguous portions of Jesus’s teaching on the topic, whatever one’s view of the “exception clause” may be, it must encourage the sacredness of the marriage bond. That is to say, even if one allows for divorce and remarriage on account of sexual sin (such as adultery, which is the majority view of the modern church), divorce must still be viewed as a result of sin and, consequently, a regrettable failure of God’s creation design.

Third, given the pressing nature of divorce and remarriage in contemporary culture, believers ought to take special care to make sure that their respective views are shaped by the biblical text, seeking to avoid common errors such as confusing stringency with holiness or permissiveness with grace. Moreover, in light of the disagreement among orthodox believers over this subject, we encourage all to hold their views of divorce and remarriage charitably, yet with conviction, being open to honest dialogue with those who espouse differing positions.

Andreas Köstenberger and David W. Jones are the co-authors of Marriage and Family: Biblical Essentials.

David W. Jones serves as professor of Christian ethics, director of the ThM program, and associate dean for graduate program administration at Southeastern Baptist Theological Seminary. Jones is also the author of more than a dozen articles that have appeared in various academic publications and a frequent speaker at churches, ministries, and Christian conferences. He currently resides near Raleigh, North Carolina, with his wife and five children.