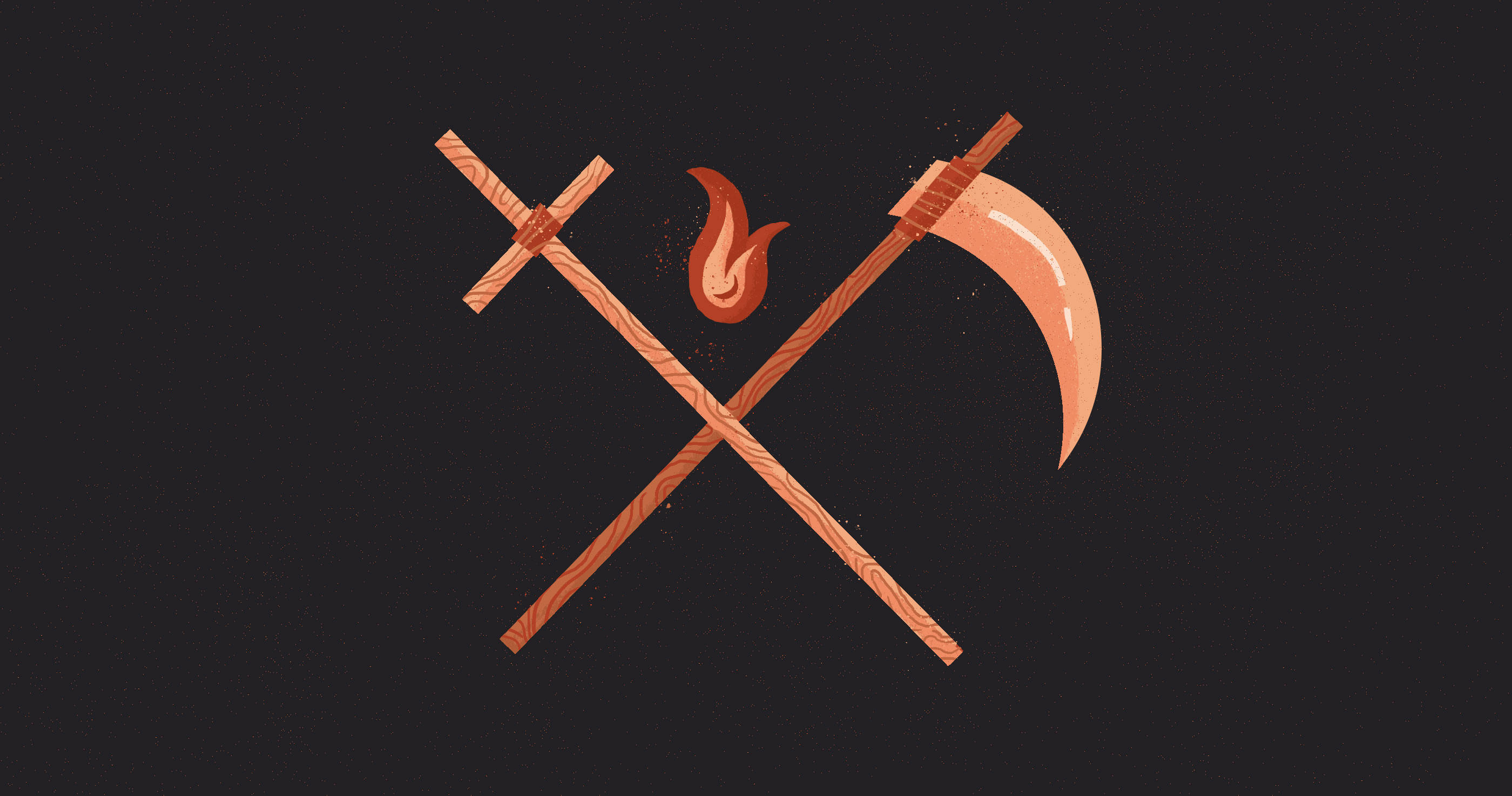 6Then I saw another angel flying directly overhead, with an eternal gospel to proclaim to those who dwell on earth, to every nation and tribe and language and people. 7And he said with a loud voice, “Fear God and give him glory, because the hour of his judgment has come, and worship him who made heaven and earth, the sea and the springs of water.” 8Another angel, a second, followed, saying, “Fallen, fallen is Babylon the great, she who made all nations drink the wine of the passion of her sexual immorality.” 9And another angel, a third, followed them, saying with a loud voice, “If anyone worships the beast and its image and receives a mark on his forehead or on his hand,10he also will drink the wine of God’s wrath, poured full strength into the cup of his anger, and he will be tormented with fire and sulfur in the presence of the holy angels and in the presence of the Lamb. 11And the smoke of their torment goes up forever and ever, and they have no rest, day or night, these worshipers of the beast and its image, and whoever receives the mark of its name.” 12Here is a call for the endurance of the saints, those who keep the commandments of God and their faith in Jesus. 13And I heard a voice from heaven saying, “Write this: Blessed are the dead who die in the Lord from now on.” “Blessed indeed,” says the Spirit, “that they may rest from their labors, for their deeds follow them!”
—Revelation 14:6–13

Fear God and Give Him Glory

The scene shifts from heaven to the skies. John uses the term “middle heaven” (mesouranēma), translated “overhead” here, to denote the skies above earth (Rev. 8:13; 19:17). The first of three angels enters the scene with a message, an eternal gospel to proclaim to all those who dwell on the earth (epi tous kathēmenous epi tēs gēs). Significantly, this time John does not use the phrase “earth dwellers” (hoi katoikountes epi tēs gēs; cf. Rev. 3:10; 6:10; 8:13; 11:10; 13:8, 12, 14; 17:2, 8), a technical term for unbelievers (cf. comment on Rev. 3:10). Here he speaks of a gospel for all people, a gospel for those from every people group, tribe, language, and nation (cf. Matt. 24:14). “Gospel” suggests the message of salvation is intended here, but, at the same time, those who do not embrace the gospel will be judged.

The angel calls all people without exception to fear God and give him glory (cf. Rev. 15:4; cf. also Jer. 13:16). Giving God praise and glory as the creator of heaven and earth (cf. Acts 4:24) is the fundamental requirement of human beings (cf. Rom. 1:21). Some interpreters argue that the giving of glory here refers to the homage rendered by the unconverted when, at the last day, they are compelled to worship the Lord (cf. Phil. 2:9–11). They question whether response to the gospel is in view here, since nothing is said about Jesus Christ. Still, it seems preferable to see a reference to salvation here. John is not required to say everything in every text, and the remainder of Revelation makes clear that one cannot fear God or give him glory unless one worships the Lamb and honors him. We also see, a number of times in Revelation, that giving God glory is an activity of the saints (Rev. 15:4; 16:9; 19:5). All human beings are summoned to fear God and give him glory, for the time of judgment has drawn near, and those who do not honor and worship him will be punished.

Another angel appears, declaring that Babylon the great has fallen. The fall of Babylon was prophesied by Isaiah (Isa. 21:9) and Jeremiah (Jer. 51:8) and fulfilled in 539 BC. John applies the description of Babylon to Rome (cf. comments on Rev. 17:1–19:5; 1 Pet. 5:13), showing that Babylon functions as a precursor and type of godless cities to come. John will expand significantly on the angel’s words in Revelation 17:1–19:5, but here he declares Babylon’s fall (cf. Rev. 18:2, 10, 21). Babylon is judged for making the nations drink the wine of her fornication (Rev. 16:19; 17:2, 5; 18:3). This fornication is spiritual and not literal, though it surely includes the idea of sexual sin. Still, the focus is on spiritual harlotry and prostitution (cf. Jer. 3:8–9; Ezekiel 16; 23; Hos. 1:1–3:5). Babylon will face judgment for encouraging the worship of false gods, spreading worldwide the message that it is good and right to rebel against the one true God.

The third angel now arrives on the scene to make a worldwide declaration in a loud voice. In every instance, the angels proclaim that one must worship the true God instead of false gods. Here the angel addresses those who give their worship to the beast (the Roman Empire) and his image and receive the mark of the beast on their forehead and hand. We know from Revelation 13:16–17 that they receive the mark for economic reasons, to flourish in contemporary society. But accepting the mark is not merely an economic decision; it reflects their highest allegiance, showing that Rome and all its glittering wealth and power are more important to them than God.

Believers are called to endure in a world fiercely opposed to them.

John continues to elaborate on their punishment. The smoke of their torment never ends (Rev. 19:3; cf. also Isa. 34:10). Some take this smoke to mean they are annihilated, ceasing to exist, but this contradicts both the experience of torment in verse 10 and the very next line in verse 11, where John says they have no rest day or night. In other words, their experience of torment continues perpetually. Such a portrait of the final judgment fits Matthew 25:46, where the righteous enjoy “eternal life” but the wicked face “eternal punishment” (cf. also Matt. 25:41). Readers are warned that terrible suffering will forever ensue if they worship the beast and its image, or receive its mark.

A Call to Endure

The remarkably strong warning in verses Revelation 14:9–11 is not written for unbelievers, for John did not write the book for them. It is addressed to believers (“the saints”) and is intended to provoke them to persevere until the end. If they give their allegiance to the beast, they will suffer forever and ever. Hence, the warning in verses Revelation 14:9–11 and the message of the first two angels (Revelation 14:6–8) calls John’s audience to endurance and perseverance (cf. Rev. 13:10). Endurance is explained further in terms of keeping God’s commands and continuing to put faith in Jesus (cf. Rev. 12:17). The reality of their faith will reveal itself in observable and concrete ways—those who endure follow God in obedience.

A heavenly voice then speaks, summing up in many ways the message of the chapter thus far, and indeed the book as a whole. John is supposed to record the ensuing message because of its importance. Believers are called to endure in a world fiercely opposed to them. But this world as it is now is not their home, and thus those who die in the Lord are blessed. They leave the struggles of this world behind (cf. Rev. 6:11; Heb. 4:9–10), exchanging them for their final reward. The Spirit reaffirms the blessing of death: believers rest from the toils marking this present evil age. They will then experience relief from the pressures impinging upon them in life. Believers will rest, John says, because their works follow them. In other words, their works testify that they belong to God, and thus the rest given them is warranted.

This article is by Thomas R. Schreiner and is adapted from the ESV Expository Commentary: Hebrews–Revelation: Volume 12.