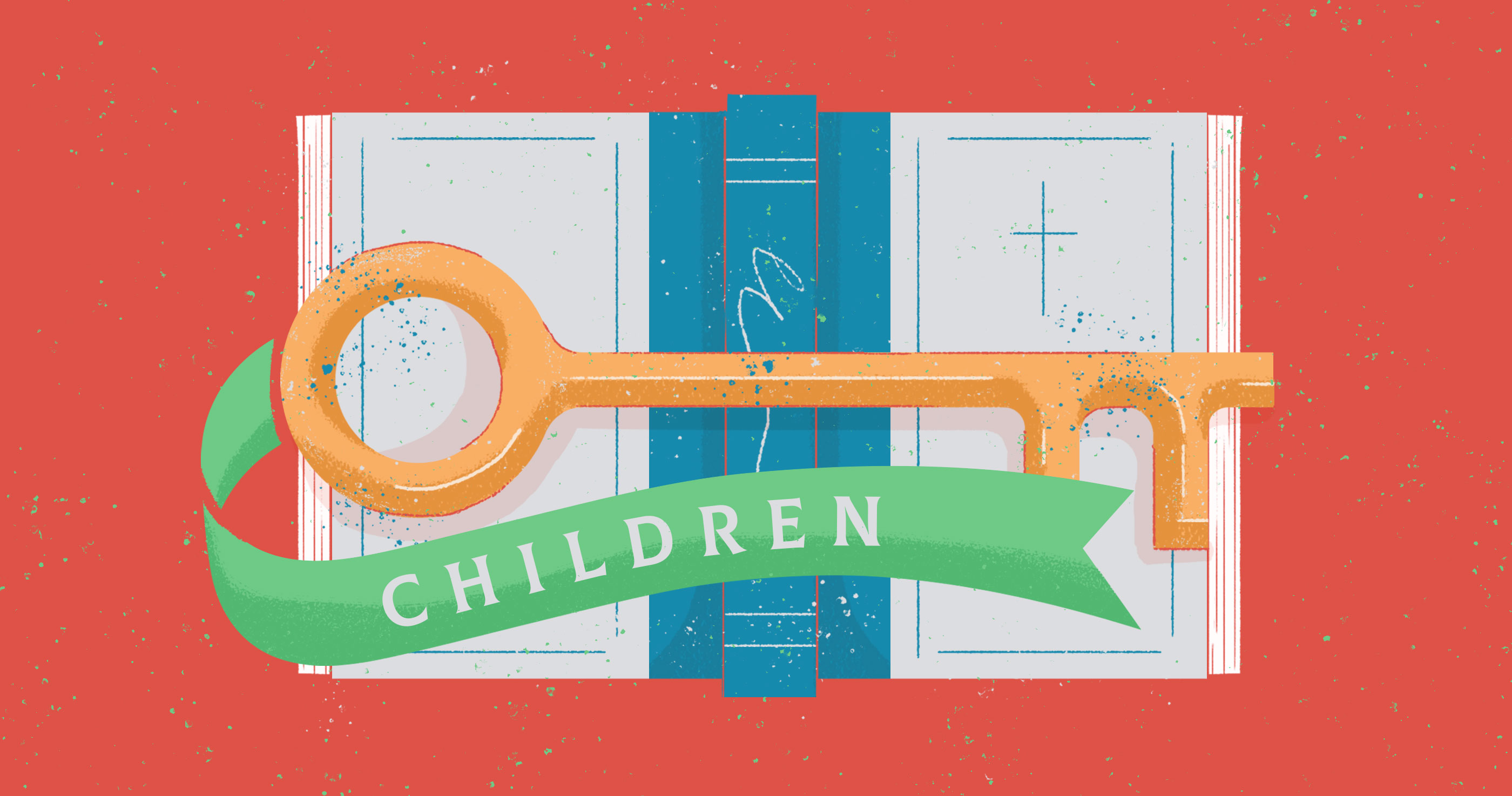 Behold, children are a heritage from the LORD,
the fruit of the womb a reward.
Like arrows in the hand of a warrior
are the children of one's youth.
Blessed is the man
who fills his quiver with them!
He shall not be put to shame
when he speaks with his enemies in the gate. Read More

Like the first section of this psalm, this does not eliminate human activity: children are a heritage from the LORD, and therefore his gift, and yet husband and wife must do something in bringing the children into the world and in raising them to be faithful members of God’s people. Here the stress falls on the children of one’s youth, now grown up and standing with their father when he speaks with his enemies in the gate (i.e., the place where justice was administered). It will be hard for the enemies (who are assumed to be unfaithful) to intimidate such a man.

He gives the barren woman a home, making her the joyous mother of children. Praise the LORD! Read More

This section of the Psalms develops the universal theme of the previous section in a surprising way: the God who deserves to be praised by all mankind is seated on high (ruling over the whole world), and yet he looks far down and raises the poor from the dust. The imagery of Psalm 113:7–8 describes a position of extreme degradation and misery (“dust” and “ash heap”) being transformed to one of dignity and privilege (“sit with princes”). For an Israelite woman to be barren (i.e., unable to bear children) was a misery, too (cf. 1 Sam. 1:2–17), and this likewise provides an image of God’s tender care for his loved ones. God’s majesty never implies his remoteness from those who look to him; it implies instead his exhaustive attention to detail, and his inexhaustible ability to care for his faithful.

Out of the mouth of babies and infants, you have established strength because of your foes, to still the enemy and the avenger. Read More

Perhaps the babies and infants are the people of Israel, seen as weak in comparison with the mighty unbelieving Gentiles, the foes, the enemy, the avenger. It is through these insignificant mouths that God reveals his majesty. The Greek translation of the Septuagint (see Matt. 21:16) rightly interprets strength as “strength attributed to God in song,” or “praise.”

And they were bringing children to him that he might touch them, and the disciples rebuked them. But when Jesus saw it, he was indignant and said to them, “Let the children come to me; do not hinder them, for to such belongs the kingdom of God. Truly, I say to you, whoever does not receive the kingdom of God like a child shall not enter it.” And he took them in his arms and blessed them, laying his hands on them. Read More

The disciples consider children to be an annoying distraction (cf. Mark 9:36–37, 42). Jesus reacts emphatically. To Jesus, children are as important as adults, and equally worthy of love (Mark 9:36–37; 10:16). to such belongs the kingdom of God. Children do not belong automatically to the kingdom but must come to Jesus and receive him the same as adults.

Train up a child in the way he should go; even when he is old he will not depart from it. Read More

This proverb, founded on the covenant with Abraham (cf. Gen. 18:19), encourages parents to “train” (i.e., to “dedicate” or “initiate”; this is the sense of the word in Deut. 20:5; cf. Ezra 6:16) their children in the way (i.e., the right moral orientation) by pointing to the kinds of conduct that please or displease the Lord, and to the normal outcome of each kind of conduct. The training will include love and instruction as well as “the rod of discipline” (Prov. 22:15).

Children, obey your parents in the Lord, for this is right. “Honor your father and mother” (this is the first commandment with a promise), “that it may go well with you and that you may live long in the land.” Fathers, do not provoke your children to anger, but bring them up in the discipline and instruction of the Lord. Read More

The submission of Ephesians 5:21 is further explained as meaning that children should submit to their parents. This submission takes the form of obedience to them. Parents are to nurture their children in the Lord.

The second family relationship illustrating submission to proper authority (Eph. 5:21) is that of children and parents. The Mosaic law prescribed death for the child who struck or cursed a parent (Ex. 21:15, 17; Lev. 20:9), and Paul lists such disobedience as one of many grave sins (Rom. 1:30; 2 Tim. 3:2). However, Paul urges in Ephesians 6:1–3 the positive duty of children to obey their parents. Obedience is due to both parents; the mother’s submission to her husband does not remove her parental dignity but rather increases it. “In the Lord” modifies the verb “obey.” What makes such obedience “right” or “just” is that it conforms to God’s holy commandment, quoted in Ephesians 6:2–3.

Children obeying their parents (Eph. 6:1) is in part how they honor them; see also Proverbs 31:28, which describes children rising to bless a wise and godly mother. There were earlier commands of God with promises (e.g., Gen. 17:1–2), but this is the first and only of the Ten Commandments to contain a promise (see also Ex. 20:12). In the new covenant the promise of the land is not physical land on earth but eternal life, which begins when one is regenerated here and now and comes to full reality in the age to come. Paul is not teaching salvation on the basis of works. The obedience of children is evidence that they know God, and it results in receiving blessings from God.

Paul begins his admonition with a negative action to avoid, followed by a positive action to develop. Paul addresses the responsibility of fathers in particular, though this does not diminish the contribution of mothers in these areas (see Prov. 31). Obedient children are particularly vulnerable, so a domineering and thoughtless father’s actions would be discouraging to them (Col. 3:21). Parents play a crucial, God-ordained role in the discipleship of their children “in the Lord” (Eph. 6:1); see Deuteronomy 6:1–9. Parental discipleship in the discipline and instruction of the Lord should center on the kinds of practices already outlined in Ephesians 4–5.

“Honor your father and your mother, that your days may be long in the land that the LORD your God is giving you.” Read More

The word “honor” means to treat someone with the proper respect due to the person and their role. With regard to parents, this means (1) treating them with deference (cf. Ex. 21:15, 17); (2) providing for them and looking after them in their old age (for this sense of honor, see Prov. 3:9). Both Jesus and Paul underline the importance of this command (Mark 7:1–13; Eph. 6:1–3; 1 Tim. 5:4). This is the only one of the Ten Commandments with a specific promise attached to it: “that your days may be long”—meaning not just a long life, but one that is filled with God’s presence and favor.

The attitude of heart Jesus is teaching does not even overlook a lowly child (at times marginalized in ancient societies) but receives, and thereby cares for, such a little one in Christ’s name. In contrast to the status-seeking of the disciples (Mark 9:34), Jesus is showing them they should willingly take on lowly, often unnoticed tasks and care for those who have little status in the world. Jesus says, Anyone who does this receives me and in so doing also receives the Father (him who sent me). (“Receives not me” should be understood as an idiom meaning “receives not only me”; see note on Luke 9:48.) Humbly caring for people of lowly status out of obedience to Christ (“in my name”) will be rewarded by rich personal fellowship with both the Son and the Father.

For you formed my inward parts;
you knitted me together in my mother's womb.
I praise you, for I am fearfully and wonderfully made.
Wonderful are your works;
my soul knows it very well.
My frame was not hidden from you,
when I was being made in secret,
intricately woven in the depths of the earth.
Your eyes saw my unformed substance;
in your book were written, every one of them,
the days that were formed for me,
when as yet there was none of them. Read More

These verses illustrate the point of Psalm 139:11–12 (the section begins with “for”, showing the connection to the previous) by describing a particular “dark place” where the Lord saw and cared for the singer, namely, his mother’s womb. God was active as the unformed substance (embryo) grew and developed; indeed he is the one who formed my inward parts and knitted me together. God saw him, and even had written in his book, every one of . . . the days that were formed for me. The worshiper realizes that, even before his mother knew she was pregnant, the Lord was already showing his care for him. His personal life began in the womb (see note on Ps. 51:5), and God had already laid out its course.

That the Lord alone is Israel’s God leads to the demand for Israel’s exclusive and total devotion to him. All Israelites in their total being are to love the Lord; “this is the great and first commandment” (Matt. 22:38). In Matthew 22:37, Mark 12:30, and Luke 10:27, Jesus also includes “mind.” In early Hebrew, “heart” included what we call the “mind”. “Might” indicates energy and ability. The demand is for a heart that totally loves the Lord. Deuteronomy anticipates the new covenant, when God’s words will be truly and effectively written on the heart (Jer. 31:31–34; also Deut. 30:6–8). The two pairs of opposites (“sit/walk”, “lie down/rise”) suggest any and every time, place, and activity.