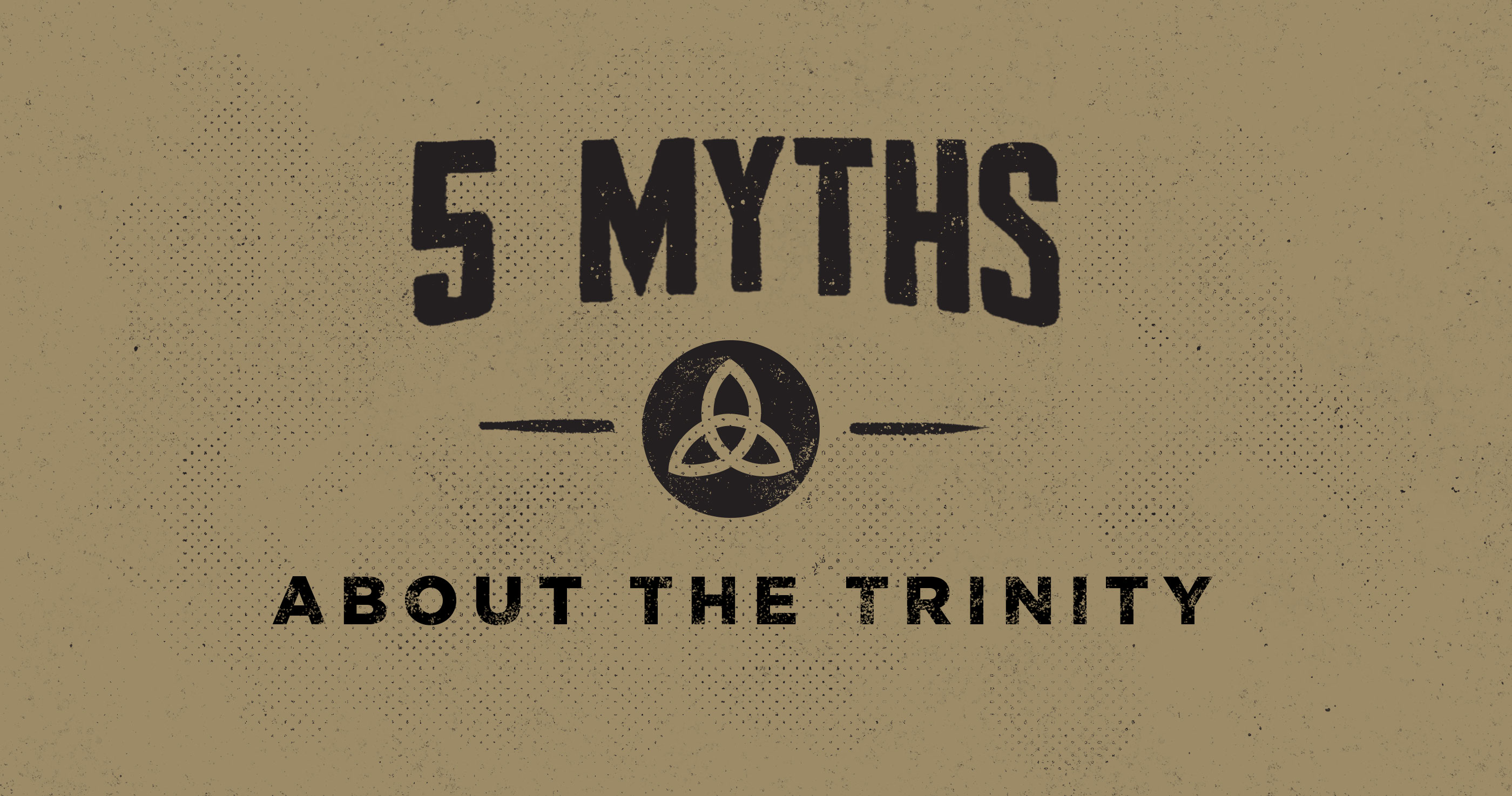 Myth #1: It’s only for theology experts.

The doctrine of the Trinity is for everybody who is saved by Jesus. Or, to say that just a little more elaborately, it’s for everybody who has been drawn to the Father through faith in the Son by the power of the Holy Spirit (see 2 Cor. 13:14). Or, to say it again, it’s for everyone who has been adopted by the Father who sent the Son to redeem us, and sent the Holy Spirit of adoption into our hearts to make us cry out to God, “Abba, Father” (see Gal. 4:4–6). Or, to say it another way, it’s for everyone who is in communion with other believers through our common access to the Father in Christ by the Spirit (see Eph. 2:18).

Or, to be more precise, it’s for everybody who wants to understand how any of this deep salvation works, and what the gospel reveals about the God who stands behind it. That’s because the doctrine of the Trinity is the only view of God that makes sense of Christian salvation. That’s one reason the church baptizes in the name of the Father, Son, and Holy Spirit (see Matt. 28:19): it’s the birthright of all the born-again.

There are, of course, experts in the doctrine of the Trinity, who have thought about it with precision and depth, and studied it in an academic way. But any subject can be apprehended simply on the one hand and studied in depth on the other hand: there are experts in everything, and their expertise doesn’t mean the thing they’ve studied becomes their exclusive property. The Trinity is too important to be left to theological experts.

Myth #2: It isn’t really in the Bible; the early church made it up.

This myth is probably based on the observation that the keywords we traditionally use in talking about the Trinity are not Bible words: Trinity, for example; but also person, nature, relation, and so on. But all those words are just labels—intended to be helpfully concise—that we attach to things we do see in Scripture. The grand story of the one true God fulfilling his promises by being with us in the Father’s sending of his Son and Spirit is a sprawling, two-testament reality of God making himself known in the act of redemption. Instead of telling that entire story every time we ponder the identity of the God of the gospel, Christians since the time of the early church fathers have tended to use the shorter, portable words. But when they started this pattern of usage, the church fathers never wanted credit for creativity. They insisted, in council after council, commentary after commentary, catechism after catechism, that they were saying what Holy Scripture said.

Some modern Christians have a kind of phobia about following the patristic lead here, preferring to use nothing but Bible words for Bible truths. They will inevitably end up having to solve the same problems the early church solved (finding heretics within their ranks using Bible words with different meanings, figuring out how to communicate the faith to the next generation, and so on), two thousand years after the fact and with their own modern idiosyncracies smuggled in unawares. Other modern Christians are overzealous about deferring to tradition and are happy to credit the church fathers with inventing a doctrine that can’t be found in the Bible. To them, the church fathers themselves respond, “no, thank you.” They never intended for us to believe in the Trinity on their own testimony; they bent all their efforts to show that God had revealed his own triunity in Scripture.

The doctrine of the Trinity is the only view of God that makes sense of Christian salvation.

Myth #3: It's irrelevant to the spiritual life.

Since God’s triunity is bundled together with the gospel, it is the foundation of the spiritual life of every believer. The more you understand the deep structure of the spiritual reality you experience in Christ and the Spirit, the more you understand and are experiencing the deep things of God for us. If you think the Trinity is irrelevant to your spiritual life as a Christian, you are probably being fooled by a kind of experiential optical illusion. What I mean is this: you can come to believe in Christ, get saved, and commune with God in the Spirit for some time before you begin to think about the Trinity. Since everything was going fine for you as a Christian before you started thinking about the Trinity, you might think the Trinity is some kind of unnecessary doctrine that ought to be tucked away in your mind somewhere as true but doesn’t affect your life. But in fact, the reason everything was going fine before is that you were immersed in the reality of the Son and the Spirit bringing you actively and dynamically into the love of the Father all along. To recognize this underlying reality ought to be an invitation for you to go deeper into what you have already begun experiencing in the Christian life.

There is one sense in which I suppose you might call the Trinity irrelevant to the spiritual life of believers. You might call it irrelevant in the sense that it is absolutely independent of believers: it’s true whether you appreciate it or not. God would be Father, Son, and Holy Spirit even if the Father had never sent the Son and the Holy Spirit, or even if the Father, Son, and Holy Spirit had never created anything or anybody to receive their blessing or believe in them. But God’s independence from everything that is not God turns out to be an important thing for us to recognize. In other words, it’s very relevant for you to know that God would be God without you.

Sometimes we use shorthand for the doctrine of the Trinity, and say that “our God is three in one,” or “three and one.” That sounds like a contradiction. But if you plug in the relevant nouns, the contradiction goes away: God is three persons in one being. That may be a mystery, but it is not necessarily a contradiction. The problem with the short phrase, “three in one,” is that it might suggest “three Gods in one God,” or “three persons in one person,” or “three beings in one being.” The short phrase takes the entire scope of the biblical message (that there is one God, and that this God exists as Father, Son, and Holy Spirit) and, by leaving out all nouns, compresses it into a form that sounds like algebra, and bad algebra at that. When God reveals himself as Father, Son, and Holy Spirit, he doesn’t ask for a sacrifice of the mind. He does ask for humble teachability, which is the same thing we need in order to accept anything God reveals.

Myth #5: Analogies for the Trinity matter a lot and will help us understand it more deeply.

What is God the Trinity like? A three-leaf clover? Water in its liquid, icy, and steamy states? The sun radiating beams of light and waves of heat? The shell, yolk, and white of an egg? A mind remembering itself, knowing itself, and loving itself? A three-person committee with one agenda? A person with three jobs? No, God the Trinity is not very much like any of these things at all. Some of these analogies are downright false and should never be used; others are a little bit helpful for thinking about some isolated elements of the doctrine of the Trinity in an abstract way. None of them are important, and none of them will take you to the next level of understanding what the Bible is getting at with its revelation of the Trinity. The whole idea that it matters very much to figure out a good analogy for the Trinity is usually a sign that we’ve gotten hold of the doctrine by the wrong end. It’s possible to launch out on a quest for answers to questions that were never worth raising. If you keep your expectations very, very, very low, some Trinity analogies might be worth considering.

But it’s significant that God communicated the truth about the Father, Son, and Holy Spirit without putting a single Trinity analogy in the Bible. What if God has actually already revealed what we need to know about what the eternal life of God is like, and did it without mentioning shamrocks or icebergs? What if the best way to understand the eternal fellowship of Father, Son, and Spirit is to understand that the Father sent the Son and the Spirit? What if the eternal God is like the Father sending the Son and the Spirit in the fullness of time, because from all eternity God is the Father, the eternally begotten Son, and the eternally proceeding Spirit? That would mean that when we tell the gospel story, we are already describing the character of God. That would mean that the Trinity and the gospel belong together as the basis of our faith and also as the beginning of our understanding.

Fred Sanders (PhD, Graduate Theological Union) is professor of theology at the Torrey Honors College at Biola University. Sanders is the author of The Deep Things of God and blogs at fredfredfred.com.