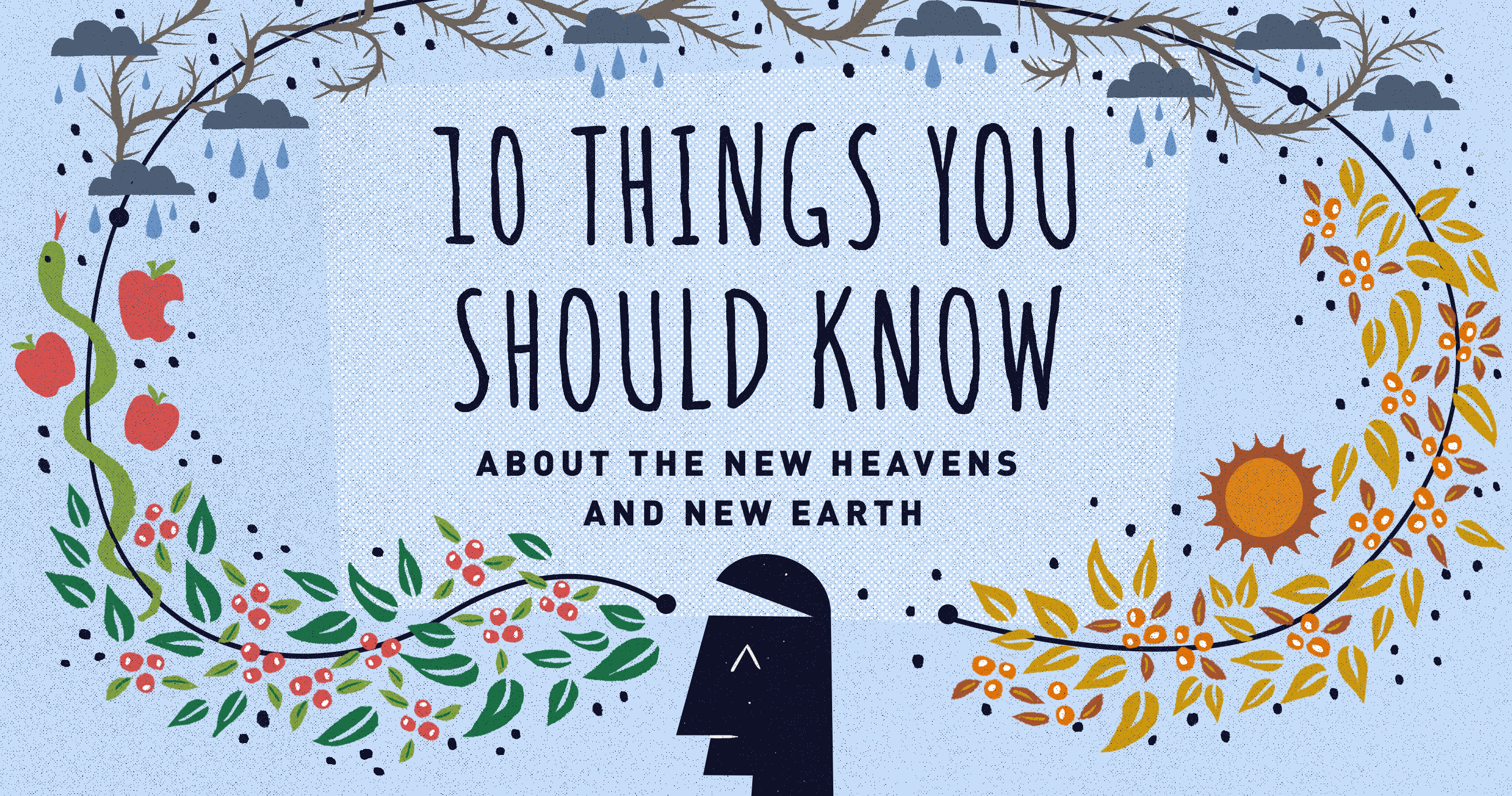 1. Jesus was raised to earth.

Jesus was raised to earth, not to heaven. We should not confuse the resurrection and the ascension. The grave of Joseph of Arimathea was empty. After his resurrection, Jesus’s body was clearly transformed, but it was still the very same physical body that was laid in the tomb. This resurrection is the firstfruits of the general resurrection (1 Cor. 15:20, 23). Our bodies will also be raised in a way that will allow us to live in the new heavens and the new earth. We do not know all the details of what this will look like, but we know that “we shall be like him” (1 John 3:2). Christianity is a resurrection religion.

The Bible does not begin with the problem of sin; it begins with the beauty of the earth. Through all the twists and turns of the biblical story, God remains committed to his creation. In the light of this, it is surprising that so many Christians view the earth as transient at best and something to be forsaken at worst. The opening chapters of Genesis explode this misconception. God, not Satan, will have the final victory over what God has made. It will not be discarded but rescued. The scope of this rescue operation encompasses all that has fallen. It is not surprising, therefore, that Scripture talks of the fulfilment of this rescue as “new heavens and a new earth” (Isa. 65:17; 66:22; 2 Pet. 3:13; Rev. 21:1). The story of the Bible begins with “God created the heavens and the earth” (Gen. 1:1) and ends with “a new heaven and the new earth” (Rev. 21:1).

3. God did not hold back his best when he created the earth.

The earth that God created is not a functional, monochrome, utilitarian machine. It is full of beauty, color, and creativity. God declared it to be “very good” (Gen. 1:31). God did not hold back when he created this world by keeping the best for heaven.

Of course, the world is not all that we would want it to be. Suffering pervades every part of our lives. But this problem is not because the earth is second rate. It is caused by the entrance of sin. Through the Bible God shows his commitment to fix this problem by descending to earth to address the issue of sin. This begins in Eden where he walks with Adam in the garden (Gen 3:8), and it continues as God’s glory is beheld in the tabernacle, in the temple, in the incarnation, in the crucifixion, in the resurrection, and in the gift of the Holy Spirit. When Jesus returns, it will not be just for a visit, to pick us up and take us elsewhere. He is coming to stay. The New Jerusalem will descend to earth (Revelation 21), and the beauty of God’s creation will be restored and renewed.

4. Humans are made in the image of God to have dominion.

Genesis 1 begins with the creation of the heavens and the earth, but then narrows in to a particular garden called “Eden.” This garden is where God dwells with his people on earth. In the Ancient Near East, the home of a god was a temple, and Eden is presented in these terms. But it is a temple with a difference. It is not a static, lifeless building but a growing garden. God is not a lifeless statue within this temple, but he walks and talks within the garden (Gen. 3:8). The images in the temple are not made of wood or stone, but are human flesh and blood named Adam and Eve (Gen. 1:26, 27).

All later tabernacles and temples within the history of the people of Israel are a reflection of Eden. The Garden of Eden is the exemplar of what it looks like when heaven and earth meet. God’s image bearers are given a purpose within the temple. They are bestowed with vice-regal authority to manage the development in God’s world, to “be fruitful and multiply and fill the earth and subdue it, and have dominion over the fish of the sea and over the birds of the heavens and over every living thing that moves on the earth” (Gen. 1:28). This is why humans were created. It goes to the core of our reason for existence.

5. God has entered into an eternal covenant with creation.

It sounds strange in English to enter into a covenant with creation. How do animals, trees, and rocks respond? But God declares: “And I will make for them a covenant on that day with the beasts of the field, the birds of the heavens and the creeping things of the ground” (Hos. 2:18). We think of a covenant in contractual terms, between two informed, consenting parties. But the Hebrew word berith (covenant) can often mean a one-sided pledge. When God cuts a covenant with Abram, Abram was asleep (Gen. 15:12).

Creation and new creation are the bookends of the Bible. God is concerned for the renewal of this earth.

6. The destruction of the earth does not mean its obliteration.

The Bible talks of the total destruction of the earth twice: once in the flood in the days of Noah and the other in the final destruction of the earth by fire. Both of these events are mentioned in 2 Peter 3, a chapter of the Bible that is sometimes cited as proof that all will be destroyed. But this raises the question, What do we mean by destroyed? The flood in Noah’s time certainly destroyed the world, but it did not obliterate it.

2 Peter 3:10 states: “But the day of the Lord will come like a thief, and then the heavens will pass away with a roar, and the heavenly bodies will be burned up and dissolved, and the earth and the works that are done on it will be exposed.” The image is that of a purifying fire which removes the dross of imperfections. The dross of sin will be removed and the purity of the gold will be exposed. What we do on earth matters.

7. The Holy Land expands to be a Holy Earth.

God’s intentions for one land, Israel, have ramifications for the future of the whole earth. Within an understanding of God’s ownership of the entire earth, God elected one nation, Israel, to be his chosen people. They were to live in a Promised Land (Ex. 3:8, 17; 13:5; 33:3) that is compared with the Garden of Eden (Isa. 51:3; cf. Ezek. 36:35). When the Old Testament closes, the people of Israel had returned from the Babylonian captivity and were reestablishing themselves in the land, but they were still awaiting a messiah who would accomplish God’s purposes.

As the New Testament opens we are introduced to this Messiah. Jesus fulfills all the promises of God. God’s purpose in the choosing of one nation was that all the nations of the earth would be blessed; God’s purpose in choosing one land was that all the earth would be blessed. In the wake of Jesus’s fulfilment of all that Israel stood for, the New Testament begins the transition from a holy land to a holy earth, from Jerusalem, Judea and Samaria, to the ends of the earth (Acts 1:8). The ultimate realization of this will be seen in “new heavens and a new earth in which righteousness dwells” (2 Pet. 3:13).

8. Away from the body and at home with the Lord.

The Apostles’ Creed asserts belief in both “the life everlasting” and “the resurrection of the body,” but immortality and resurrection are not the same thing. Immortality means that our life will not be interrupted by death, but resurrection means the raising of our physical bodies. What will be the state of those who die before the general resurrection at the return of Jesus?

The ultimate hope for the Christian is “a new heaven and a new earth” (Rev. 21:1) within which our resurrected bodies will live. But should we die prior to this, death will not be able to separate us from the love of God in Christ Jesus (Rom. 8:38–39). As we await the general resurrection, we will be “away from the body and at home with the Lord” (2 Cor. 5:8). Questions abound at this point, but what we know should give comfort in the face of what we don’t know. We will be with Jesus, and that will be sufficient.

9. Jesus’s proclamation about the kingdom of God is concerned with this world.

In the meantime, the division is not between a sacred kingdom and a secular kingdom. The effects of sin can be just as sorely felt in the church as in the workplace. Similarly, the effects of the kingdom of God can be lived out on Mondays as well as on Sundays. Jesus is Lord over all. He is committed to his creation.

Creation and new creation are the bookends of the Bible. God is concerned for the renewal of this earth. Christian ministry is not just about telling people how to get into heaven when they die, essential though that is. It is also concerned for what happens in this world. Telling people the way of salvation is of foundational importance. Without repentance of sins and submission to the Lordship of Jesus, nothing else makes sense. But that is not the end of the story. If we acknowledge that the Christian’s hope is the renewal of all things, it gives meaning to life. Christian communities are commended for the way they bless the places where they live (Phil. 2:15; Col. 4:5–6; 1 Thess. 4:11–12; Tit. 2:9–10). If our lives are transformed by the power of the gospel, our workplaces, families, marriages, friendships, and world will be impacted. God is concerned for this physical world. A good question for every church to ask is, If our church were to close down, would anyone in our neighborhood notice the difference?

Ian K. Smith is the author of Not Home Yet: How the Renewal of the Earth Fits Into God’s Plan for the World.

Ian K. Smith is the principal of Christ College, Sydney, where he also teaches Greek and New Testament. He has also served in parish ministry and as a missionary in the Pacific island nation of Vanuatu. He speaks regularly at churches, conferences, and other venues.