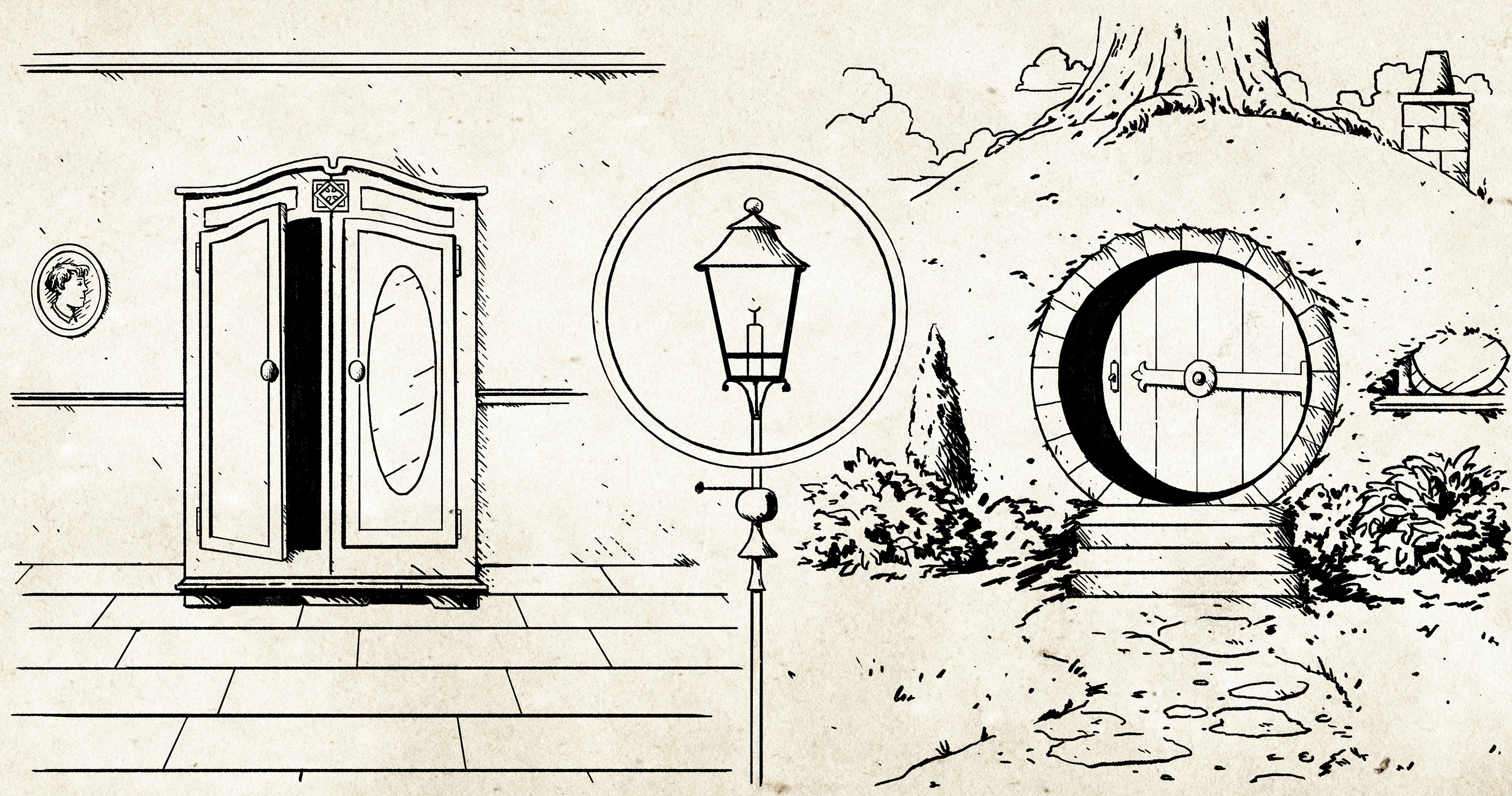 J. R. R. Tolkien always acknowledged that C. S. Lewis played a huge role in encouraging him to finish writing The Lord of the Rings. He was equally insistent that Lewis had no influence on the actual content of The Lord of the Rings. On this second matter, Tolkien may not have been entirely honest with himself, or perhaps, he may simply not have been very self-aware.

The Lord of the Rings was a sidetrack from Tolkien’s real writing project, the mythology of his created world of Middle-earth. That mythology is a collection of tales that spans thousands of years from the creation of his imagined world down through several ages. Tolkien never quite finished his work on this mythology which he called The Simarillion. When he died, he left a trove of disordered manuscripts that his son, Christopher Tolkien, devoted his life to editing into a publishable form.

Tolkien embarked on writing The Lord of the Rings in response to a prompting from Stanley Unwin, the publisher of The Hobbit, that he should write another hobbit book. The Hobbit had met with some financial success for the firm of Allen & Unwin, but more to the point, Tolkien had reaped a modest financial reward from his children’s story. Money was always an issue, so Tolkien began to write. The hobbit stories of Tolkien represent significant departures from the kind of mythological and legendary stories that Tolkien had been writing for The Silmarillion. The Hobbit has a different kind of plot.

As much as the people of the world love stories, the cultures of the world have developed few basic plots. The oldest plot is the adventure story which was told around the fires at night with the birth of language. The adventure story celebrates courage and skill in combat. It extolls the abilities and temperament needed for survival in a primitive society. Homer’s Iliad is an adventure story, and so is Beowulf. Virtually every culture has told the adventure story. In the centuries after Homer, the Greeks developed drama which took two forms: tragedy and comedy. Over fifteen hundred years would pass before a new kind of story plot appeared in the West. Then in the eleventh century, the troubadours of France invited the love story. This new kind of story was the subject of C. S. Lewis’s first academic book, The Allegory of Love. Not until the nineteenth century did the West devise any new plots, but in 1817 Mary Shelley created science fiction with Frankenstein and Edgar Allan Poe created detective fiction with “The Murders in the Rue Morgue.”

Tolkien loved the story of Beowulf, the hero who went to fight the monster, which involves the skill of the warrior and the hunter. Often, the adventure story involves a journey. Beowulf went to fight the monster out of loyalty to his chief, even though he knew he would die. Achilles went to fight the Trojans, not so much for Agamemnon but for glory. Even though Beowulf and Achilles are the greatest men of valor of their age, they both die in their struggles. In this version of the journey story, the hero meets his death in the adventure. Tolkien loved this story. It is the stuff of the Norse mythologies that captivated him. This plot runs through all of Tolkien’s Silmarillion stories which cover thousands of years in the history of Middle-earth. They are stories of despair, desolation, destruction, doom, and death. Even if someone survives the great conflict, they can never go home again. They are not happy stories. They are profound, but not happy.

David Lyle Jeffrey once lectured at Union University and spoke on the different ways that cultures tell the journey story. By and large, the journey either ends in death, or the hero returns home with a great reward. At the end of his seven voyages, Sinbad is wealthy beyond measure. At the end of his ten labors, Hercules is honored above all men. In neither case, however, does the hero undergo any change. Hercules is the same fellow he always was. Sinbad is the same rascal. Jeffrey observed that since the resurrection, Christian have told a different version of the journey story. The hero travels to the end of the world on a desperate mission during which journey he fights impossible foes and risks impossible hardships in order to win the great prize beyond all measure. Having obtained the great, indescribable thing, the hero returns home a changed man. The one who returns is not the same person who first left on the journey.

This third form of the journey story is the plot that captivated the mind of young C. S. Lewis when he was still a teenager. He first discovered it in William Morris’s The Well at the World’s End (1896). Then, he found it again in the medieval tales of the quest for the Holy Grail, such as Malory’s Le Morte d’Arthur (circa 1469). Next, he discovered Edmund Spenser’s The Fairie Queene (1590-1596). Finally, Lewis came across George MacDonald’s Phantastes (1858) in a bookstall at a train station. These tales revived that sense of longing Lewis had felt from time to time since early childhood which he called joy, and this version of the journey plot became his favorite kind of story. Though written in different periods, set in different periods, and occupied with different details, these stories all involve the fantastic journey to the farthest reaches to accomplish the great task before returning home a changed person. It is the Christian story. When Lewis wrote his spiritual autobiography in allegorical form, he chose the allegory of the journey to represent his conversion. Though inspired by John Bunyan’s The Pilgrim’s Progress in which the pilgrim journeys from the City of Destruction to the Heavenly City, Lewis made his story The Pilgrim’s Regress, because his pilgrim went on the journey of faith until he reached Christ, but then he had to return to his daily life and live as a changed person. Lewis loved the story of “there and back again.”

Lewis and Tolkien began meeting together on Monday mornings, probably around 1928, to discuss their common interest in Norse mythology. One day, Tolkien showed Lewis The Lay of Leithian, which formed part of his vast and growing mythology of Middle-earth. Lewis was entranced by it and insisted that Tolkien do more. Lewis, in turn, gave Tolkien a copy of the first chapter of his magisterial study of medieval allegorical courtly love poetry which would finally be published as The Allegory of Love (1936). Through their conversations, Tolkien played a major role in Lewis conversion to theism in 1930 and to Christianity in 1931. While Lewis’s lone conversion was underway, Tolkien had started to write The Hobbit.

Though Tolkien had read Malory’s Le Morte d’Arthur and several of the other journey stories that Lewis loved, Tolkien was not taken by them in the same way Lewis was. When Tolkien made his own attempt at writing a poetic version of the King Arthur story, he omitted the Grail quest and focused on Arthur’s journey to his final battle and death. In all likelihood, Lewis’s discussion of the journey story influenced Tolkien to adopt this plot for The Hobbit and later for The Lord of the Rings, even to adopted the plot for the sub-title, There and Back Again.

Lewis probably also played a part in the details of the plot for The Lord of the Rings. Once Allen & Unwin said they wanted another hobbit story, Tolkien set to writing in the late fall of 1937. He wrote the first chapter in one month, which was break neck speed for Tolkien. Then he stalled. When Bilbo Baggins disappeared from his own birthday party, Tolkien had no idea where Bilbo was going or why. He did not have a story in mind. He finally decided the story was about Bilbo’s ring, but he knew less about the ring than Bilbo.

Meanwhile, Lewis was offering helpful criticism to his other friend, Owen Barfield, who had written a play in which he retold the story of Orpheus. The friendship with Tolkien had revived and stoked Lewis’s love of the old Norse myths which had been further enhanced by trips to London to see productions of Wagner’s operas about the ring of power forged by the dwarf Alberich with which he devised to rule the world. In a letter to Barfield in March 1937, Lewis expressed the view that someone should retell the story of The Ring. Shortly after this exchange between Lewis and Barfield, Tolkien began writing again, and now he knew what Bilbo’s ring was. It was a ring of power, forged in the fires of Mount Doom by Sauron in order to rule the world.

What we have is circumstantial evidence, but the coincidence of Lewis’s thoughts of retelling the Ring story, the weekly meetings between Lewis and Tolkien to discuss their writing, and the time frame of Tolkien’s writer’s block and the sudden new plot line discovery all fit together to suggest that Lewis brought up the idea of retelling the old Norse/Germanic myth of the Ring of the Nibelung to Tolkien. Tolkien would refashion the myth from a Christian point of view and tell it in the form of Frodo’s journey to the end of the world and back again in which all the fellowship of the ring were changed as a result of their journey together.

This article is adapted from The Making of C. S. Lewis: From Atheist to Apologist by Harry Lee Poe.

Believing in a moral God is still not the same as believing that God took on flesh and dwelt amongst us as Jesus.