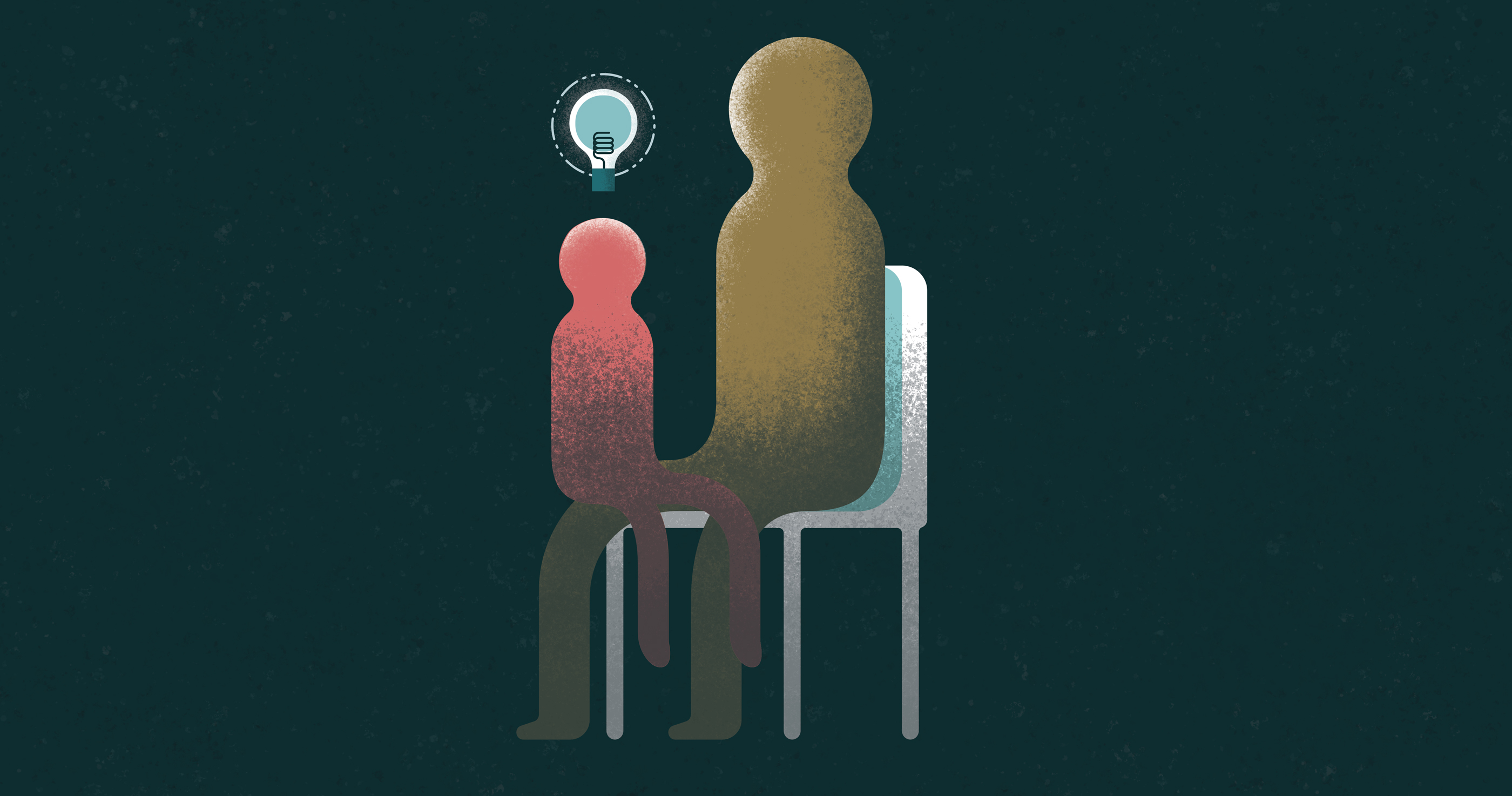 Try a simple experiment. Take a small child on your knee. Respect him. Do not see him as something to prune, form, or mold. This is an individual who thinks, acts, and feels. He is a separate human being whose strength lies in who he is, not in who he will become. If his choices made now and in the future are to be good ones, this person must understand reality and see the framework of truth. In the shorthand of language we call this “knowing.” The child is a person who needs to grow in knowledge.

You have some of that knowledge. Not because you are an adult and adults are supposed to be wonderfully clever; the Bible is very clear in its teaching that there is a sense in which we must ourselves become like this little child on our knee if we are to inherit the kingdom of God. But we have knowledge because we have lived in God's world as persons, and that knowledge can be shared. Christians have the added perspective of God's Word from which to explain their experience and understanding of life.

We are told by many in our generation that this small child is a cog in a machine, or even that he is a possession, like a pet animal. Many adults now “have” a child, in the same way that they “have” a washing machine or a collie dog.

We must answer: No. You are holding a person on your knee. And that is wonderful.

What sort of person is it whom we are holding? To know him we must consider the various aspects integrated into the unity which we call “this person” (Johnny, Sally).

Physically, his little body may be vigorous and healthy, or malnourished and dejected. His mind may be alert and responsive, or it may be dulled and neglected. His emotions may be warm, trusting, affectionate, or fearful, wary and suspicious because of past hurt. His spirit may be awake to that great Lover of children, or it may be ignorant and withdrawn. Worse, he may already be bored by sawdust-like religious slogans. Has he been warmed at the flame of the Shepherd who has cared for him?

Look well at the child on your knee. In whatever condition you find him, look with reverence. We can only love and serve him and be his friend. We cannot own him. He is not ours.

Neither would it be right to use the fact that he is dependent on us to brainwash him into thinking any arbitrary thought or perform any arbitrary act that we may deem useful. We should not plan his life for him, so that he is being prepared for some great purpose-even if the purpose we intend is a worthy one in our eyes (such as becoming an ever-loyal and patriotic supporter of our own denomination or brand of politics, or acting out our own ego, pride, or ambition). This was an important issue for [late 18th Century British Educator] Charlotte Mason.

We must know something about the material we are to work upon if the education we offer is not to be scrappy and superficial. We must have some measure of a child's requirements, not based on his uses to society, nor upon the standard of the world he lives in, but upon his own capacity and needs.1

Charlotte Mason rejects the utilitarian view of education and the conventional educational standards of her day. She challenges us instead to identify the child's actual needs and capacities; to serve him as he is, on the basis of what is right and good for him as a person.

Will this perspective not produce a selfish, non-useful member of society? No indeed. Not if we serve this person with true education.

Our journals ask with scorn, “Is there no education but what is got out of books at school? Is not the lad who works in the fields getting an education?” And the public lacks the courage to say definitely, “No, he is not,” because there is no clear notion current as to what education means, and how it is to be distinguished from vocational training. But the people begin to understand and to clam our for an education which shall qualify their children for life rather than for earning a living. As a matter of fact, it is the person who has read and thought on many subjects who is, with the necessary training, the most capable whether in handling tools, drawing plans, or keeping books. The more of a person we succeed in making a child, the better will he both fulfill his own life and serve society2. (italics mine)

And so Charlotte Mason rejected the idea that what this young person needed was molding. “Their notion is that by means of a pull here, a push there, a compression elsewhere a person is at last turned out according to the pattern the educator has in his mind.”3

Charlotte Mason was, however, a realist. She accepted the little child exactly as he was. She did not romanticize him, but she appreciated him and looked with wonder at what she found.

The child is a person who needs to grow in knowledge.

The most prosaic of us comes across evidence of mind in children, and of mind astonishingly alert. Let us consider, in the first two years of life they manage to get through more intellectual effort than any following two years can show. [She proceeds to catalog the marvelous accomplishments that occur in the self-education of these young persons under two.] . . . If we have not proved that a child is born a person with a mind as complete and beautiful as his little body, we can at least show that he always has all the mind he requires for these occasions; that is, that his mind is the instrument of his education and that his education does not produce his mind.4

A Rich Diet of Stories

Can you sense the atmosphere in which this educator approached children? She respected their minds, even as equally capable as her own exceedingly capable mind. She had her own word, "twaddle," for the mentally inferior and useless stuff produced or written for children by adults. She saw that it devalued their minds.

I like both the word and the concept it communicates. I can readily imagine the scene Charlotte Mason describes in her book Home Education, a book written to help parents and teachers educate children under nine years of age.

Indeed, I am inclined to question whether, in the interest of carrying out a system, the charming [kindergarten] teacher is not in danger sometimes of greatly undervaluing the intelligence of her children. I know a person of three who happened to be found by a caller alone in the draw­ing-room. It was spring, and the caller thought to make himself entertaining with talk about the pretty “baa-lambs.” But a pair of big blue eyes were fixed upon him and a solemn person made this solemn remark, “Isn't it a dwefful howid thing to see a pig killed!” We hope that she had nev­er even heard of the killing of a pig, but she made as effec­tive a protest against twaddle as would any woman of Soci­ety . . . Treasure Island, Robinson Crusoe and his man Fri­day, the fight of Thermopylae, Ulysses and the suitors—these are the sorts of things that children play at by the month together; even the toddlers of three or four will hold their own manfully with their brothers and sisters. And, if the little people were in the habit of telling how they feel, we should learn perhaps that they are a good deal bored by the nice little games in which they frisk like lambs, flap their fins, and twiddle their fingers like butterflies.5

This is one of the fundamental principles which made Charlotte Mason into a great educator. She not only said that she treasured a child's mind, but she acted upon that belief. It had many practical ramifications, as we shall see later on. Charlotte Mason enjoyed sharing the good things of life with the eager minds of children. She dealt with them on an eye-to-eye level. She never felt that they weren't old enough to appreciate and think about things which she knew were good. She de­lighted in introducing them to all aspects of reality, with a positive joy. She delighted in their separate individuality.

This article is adapted from For the Children’s Sake: Foundations of Education for Home and School by Susan Schaeffer Macauly.

Susan Schaeffer Macaulay grew up in Switzerland at L’Abri Fellowship, which was founded by her parents, Francis and Edith Schaeffer. She and her husband, Ranald Macaulay, established and led the L’Abri branch in England for several years. She is the author of For the Family’s Sake and contributed to Books Children Love and When Children Love to Learn.

The following prayers are from The Primer (1652) by John Owen and can be used to give children a framework for talking to the Lord in prayer.

3 Pieces of Advice for Teens about to Start High School

In the long run, your friends have an enormous influence on you, so you need the right kinds of friends.

Life includes not only living expe­riences, but also the best that mankind has produced in art, books, music, ideas, and many more areas.