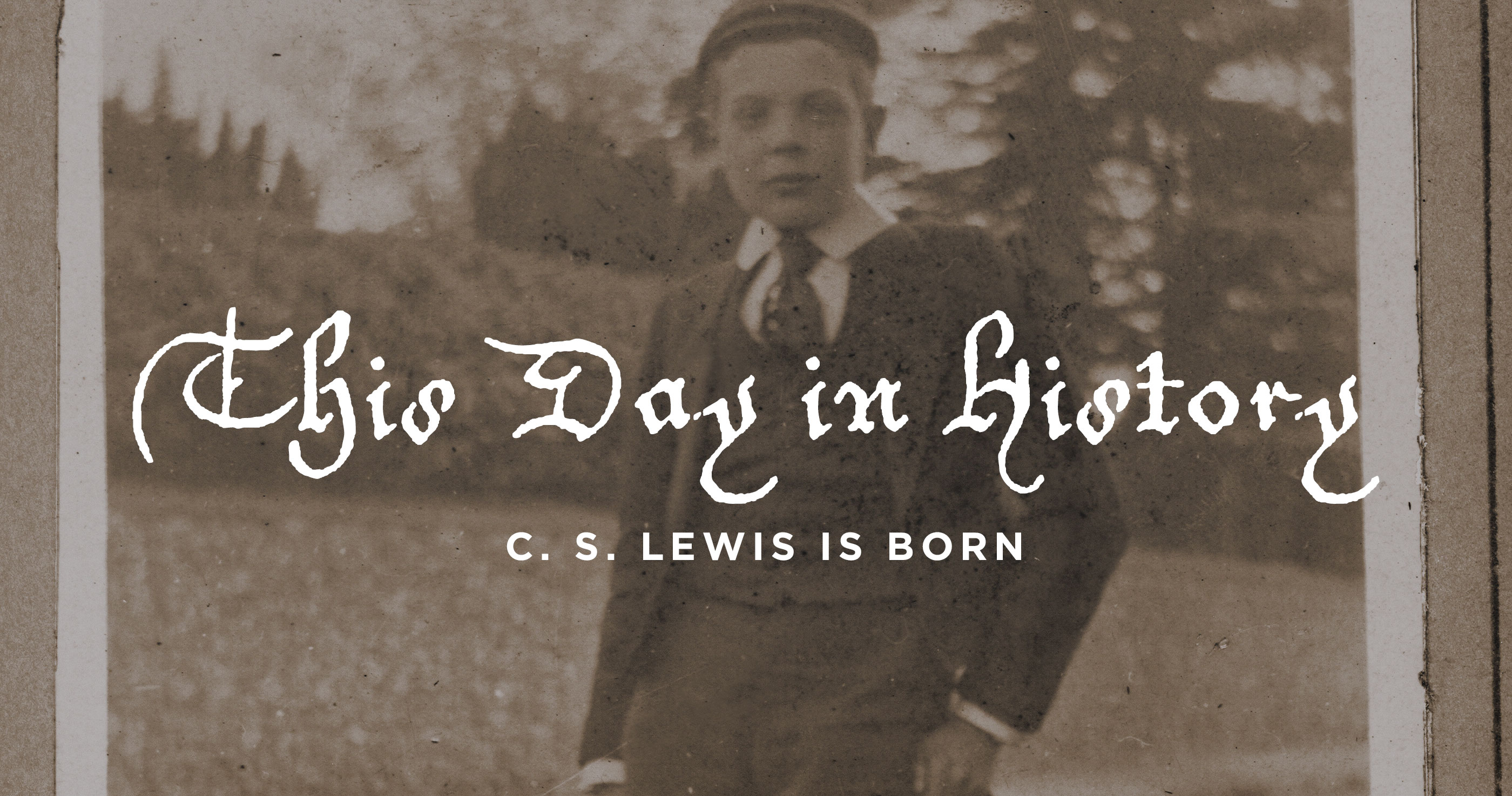 On this day in history, the most significant Christian apologist of the twentieth century was born at home in Belfast, Ireland. C. S. Lewis was not an Englishman. He was Irish before the division between Ireland and Northern Ireland came about in the 1920s in an effort to resolve the bloody conflict between the Catholics and Protestants of Ireland. His Irishness would play a major part in who C. S. Lewis would become and it created a rocky road for him to travel from childhood to manhood within the English public school system.

If someone had told his parents that C. S. Lewis would grow up to become an internationally known defender of the Christian faith, they would not have been at all surprised. They might even say it was inevitable, given that he was born into a family of clergy on his mother’s side. His grandfather was the rector of the church his family attended in the Holywood Hills outside Belfast. His great-grandfather had been a bishop! Though the casual onlooker might say that it was in his blood, faith does not come genetically. Faith would come most reluctantly to C. S. Lewis years after he had grown up, but his conversion took place on tracks laid down by Lewis as a boy and teenager when faith was the farthest thing from his mind.

When death came to C. S. Lewis a few days before his sixty-fifth birthday, however, he lived far away from the Ireland he loved all his life. He had gone up to Oxford in 1917 when he was eighteen, and except for the year that he spent in the army at the end of World War I, he made Oxford his residence until he died. In the meantime, he achieved great fame as an apologist for the Christian faith, as a children’s story writer, and as a science fiction writer. In terms of his profession as a scholar of medieval and renaissance literature, he established a reputation as one of the great literary critics of the twentieth century.

Lewis had never intended to become an apologist anymore than he had intended to become a Christian. His first effort at apologetics might have died a quiet death. It took the form of an allegorical account of his conversion along the lines of The Pilgrim’s Progress, which he called The Pilgrim’s Regress, because in his life story, he had to plunge back into the world until death would finally come. After that little venture that he wrote in two weeks while on vacation back in Ireland, Lewis plunged into his scholarly work in order to gain a reputation.

His first great scholarly effort was The Allegory of Love (1936) which explored the medieval allegorical courtly love poetry most popularly identified with the King Arthur stories. Then he tried his hand at science fiction with mild success. He did not take up rational apologetics until the beginning of World War II when he was asked to write a book that became The Problem of Suffering (1940). On the strength of this book, he was asked to deliver a series of broadcast talks for the BBC. One series stretched into four before the end of the war. They were published individually as small booklets during the war. In 1952 the four broadcasts were collected into a single volume that was published as Mere Christianity. Toward the end of the war, Dorothy L. Sayers urged Lewis to write a strong apologetic that made the case for miracles. He agreed, and it was published as Miracles in 1947.

Once freed from the obligations of “war duties,” however, the apologetics of Lewis returned to his earlier and preferred mode: storytelling. Even during the war, the apologetics that Lewis wrote on his own involved fictional storytelling in the form of The Screwtape Letters and The Great Divorce. After Miracles, he wrote the seven volumes that comprise the Chronicles of Narnia, and he wrote a literary novel based on the story of Psyche from Greek mythology. In the last decade and a half of his life, Lewis practiced what he called the “best apologetics,” which involved not more little Christian books, but more little books on every subject by Christians with their Christianity latent. These books include The Discarded Image, The Four Loves, Reflections of the Psalms, Studies in Words, and several collections of essays.

Lewis died on November 22, 1963, just seven days short of his sixty-fifth birthday—the same day that John Kennedy was shot in Dallas. In the great stir, few people noticed the death of Lewis, whose funeral was attended by only a few of his oldest and dearest friends.

Lewis provides a model to all believers of the importance of practicing the obedience of telling one’s own story of faith.

C. S. Lewis never regarded himself as a theologian, even though he became one of the most important voices for the Christian faith in the twentieth century. A number of famous preachers and theologians appeared on the scene and then faded away over the decades as Lewis’s writing continued to be read and appreciated by people all over the world. Mere Christianity in particular has played a significant role in the spiritual development of millions of people. Yet, Lewis had no formal theological training.

What Lewis did possess was a willingness to use his gifts for Christ. He once acknowledged that he was the last person who should be writing the kinds of books he wrote, but he only did so because the theologians had not. To a great extent, Lewis only ever shared his testimony. While The Pilgrim’s Regress and Surprised by Joy are allegorical and straightforward accounts of the obstacles to faith and how they were met in his life, almost all of his other apologetic writing is his personal testimony in another form. The questions he addressed in The Problem of Pain and the first part of Mere Christianity are the issues that he faced as a young man. He does not simply provide a logical explanation for the Christian faith. He presents the logical path by which he came to faith. Lewis provides a model to all believers of the importance of practicing the obedience of telling one’s own story of faith, even as Christ charged his disciples to be his witnesses.