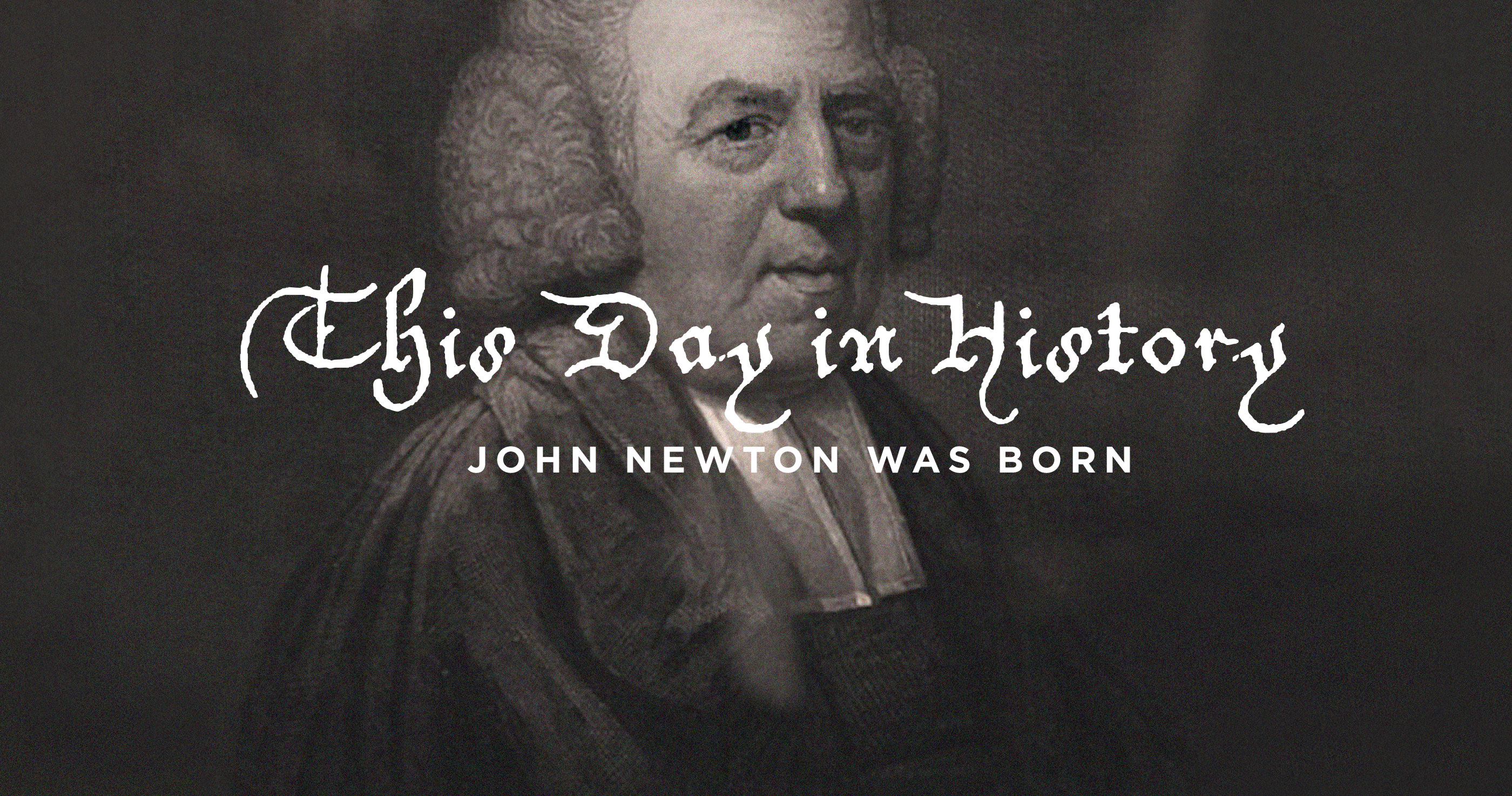 A Significant Day for John Newton

In the spring of 1758, New England pastor and theologian Jonathan Edwards died from smallpox at the age of fifty-five. Three months later, and three thousand nautical miles away, a young man in England sunk to his knees in prayer. The young man was John Newton (1725–1807). Newton began an intense season of prayer, fasting, Bible reading, self-inquiry, and intense deliberation before the Lord concerning his burgeoning desire for pastoral ministry. The forty-two days of self-examination concluded on his thirty-third birthday, August 4, 1758. Newton wrote in his diary, “The day is now arrived when I propose to close all my deliberations on this subject with a solemn, unreserved, unconditional surrender of myself to the Lord.”1

Ministry was an unlikely career path for the young man born with saltwater in his veins and with nearly two decades of sailing experience on his résumé. Newton’s sailing days began at age eleven when he accompanied his father on the sea, but ended at age twenty-nine when he suffered a surprise epileptic seizure. A year later, in 1754, he became a land-based surveyor of the tides (a senior customs official) in Liverpool, the busiest slave-ship harbor in England, and, as a result, Europe’s richest port.2 With the position came significant authority, desirable comforts, and a solid paycheck.

Newton had everything. He was a young Christian, married to the woman of his dreams, shrewd in business, and settled in a secure job. But despite the securities, his heart remained restless for a very improbable calling. On his thirty-third birthday Newton was fully persuaded: the Lord had called him to pastoral ministry, and to a significant pay cut. The transition ahead was long and painful. Due to ecclesiastical hurdles, it would take six years and the help of the distinguished William Legge, the second earl of Dartmouth, to finally land Newton’s first pastorate in 1764.

Newton on the Christian Life

Exploring the life of a slave trader turned hymn writer, this book looks to the pastoral legacy of John Newton, whose hundreds of extant letters offer modern Christians valuable insights into the Christian life.

Newton’s fruitful forty-three years as a shepherd, first in the village of Olney (1764–1779), then in the city of London (1779–1806), would not hallow his name in church history. He’s mostly remembered for his hymn “Amazing Grace,” for his radical spiritual transformation from a near-death shipwreck, and for his work with William Wilberforce (1759–1833) to end the “inhuman traffick” of the British slave trade, a trade in which he once sought his personal wealth and fortune. But spread out between Newton’s dramatic conversion as a young man and his abolitionist efforts as an old man span over four decades of pastoral letter writing—a remarkable legacy of its own.

Providentially, Newton’s placement in history opened to him the full potential of letter writing in England. First, the Post Office had developed to the point where letter delivery was more affordable and reliable than ever. Second, British society was embracing a new, flexible, abbreviated, and informal style of English, perfectly suited for the post. These two critical developments propelled the eighteenth century into “the great age of the personal letter.”3 And the best of these “personal letters” were written with the intent to be read aloud in households and shared with others (think blog, not e-mail). Trending in this direction, letter writing emerged as the popular social media of Newton’s day, and religious leaders like Newton turned to writing pastoral letters that sometimes rivaled sermons in both substance and usefulness.4 Personal letters from Newton were prized and were often collected as family heirlooms. Not so with his sermons. Though respectable, they were too simple to endure the ages. And his most substantive book, a fairly detailed work titled A Review of Ecclesiastical History, didn’t sell well. So as other, superior church histories began appearing in print, and as pastoring required more of his time, Newton abandoned the future volumes he envisioned in the series. Early in his ministry, Newton became aware that his greatest gift to the church would emerge out of the time he spent alone, next to a fire, with single pages of blank paper, his pen in hand, his black ink close, and a lit pipe in his mouth as he sat and wrote pastoral letters.5

His most popular letters proved to be his most extemporaneous, his utterances of the heart. Newton’s skill in directing the attention of his readers to the glory of Jesus Christ made his letters admired.6 And readers appreciated Newton’s clear, simple, and direct communication style. Shaped during his first sixteen years of ministry in Olney, Newton’s unpretentious style served the poor, ignorant, and illiterate adults who labored in confined quarters, lacked proper nourishment, and lived under widespread struggles like poverty, nervous disorders, alcoholism, and suicide. There Newton led popular children’s meetings and entered the homes of his people to listen to and care for their various spiritual struggles. In Olney, Newton honed his skill to capture the attention of children and then applied that same skill to adults.7

Newton’s theology best works itself out in letters because Newton understood the Christian life to be a journey between two worlds (Phil. 3:12–4:1). The journey has a dark past, a setting-out, snares and dangers along the way, and then a glorious end. Because the Pilgrim has not yet reached home, his focus remains set on the daily steps of progress. This explains Newton’s deep concern with the stuff of the daily Christian life and his attraction to John Bunyan’s classic allegory The Pilgrim’s Progress. Newton read the allegory so frequently he claims to have nearly memorized it.8 And for over six years, he delivered weekly lectures to the meager farmers and dejected lace makers of Olney through the text of The Pilgrim’s Progress.9 Newton believed that explaining the storyline of Bunyan’s classic was essential for preparing youth for life.10 As he lectured on the allegory, he traveled slowly, once writing to a friend of these lectures, “I find this book so full of matter, that I can seldom go through more than a page, or half a page at a time.”11 Newton’s love for the allegory, and his careful study of it, became known, and he was approached by an editor to write a preface to a 1776 edition, which he did. The Pilgrim’s Progress was a comprehensive map, Newton wrote in the preface, “a map, so exactly drawn, that we can hardly meet with a case or character, amidst the vast variety of persons and incidents, that daily occur to our observation, to which we cannot easily point out a counterpart in the pilgrim.”12

Newton’s theology best works itself out in letters because Newton understood the Christian life to be a journey between two worlds.

In Bunyan, Newton finds a like-minded model for the application of theology to various and comprehensive life situations, stages of maturity, and personality types. And while no Christian life experience is exactly like any other, all Christian journeys share certain similarities. This explains why The Pilgrim’s Progress is perhaps the best-selling book in church history, behind only the Bible. Newton published his personal letters from a similar conviction. In Bunyan’s classic we find the allegorical counterpart to Newton’s letter-writing ministry.

Biographically, Bunyan and Newton share other traits. Newton, “the African blasphemer,” was a monster of sin, whose debaucheries made even sailors blush. Bunyan, “the village rebel,” was a man who breathed obscenities and once was rebuked by a prostitute for his swearing. Said Spurgeon of Bunyan and Newton, “Both of them had been ringleaders in sin before they became leaders in the army of the Redeemed,” and “no man in his senses will venture to assert that there was anything in Newton or Bunyan why they should engross the regard of the Most High.”13 Each was converted by free grace. Neither forgot it. Both were later called to ministry, but neither man was afforded academic training in theology. Both took pastorates, and each relied heavily on the experience of his dramatic conversion, a careful (but fairly simple) understanding of Scripture, a vivid imagination, and street smarts, to help lead others along this journey of the Christian life.

With everything else Bunyan and Newton are remembered for, they both expressed pastoral skill creatively via popular cultural mediums to help fellow believers reach Zion. Newton’s letters were written to pilgrims on the road because Newton thought of the Christian life in terms of progressive growth. Even with all the setbacks and disappointments along the way, the true believer matures from spiritual child to adolescent to adult, or from acorn to sapling to large oak. Newton’s letters are filled with spiritual progress because Newton kept the end goal of the Christian life in view. While letters of gossip are aimless, Newton’s letters are always aimed, and they are aimed because Newton was self-consciously theologically driven. Because his theology was cohesive, he was able to point other Christians forward and able to help them move away from spiritual immaturity and toward spiritual adulthood.14

This article is adapted from Newton on the Christian Life: To Live Is Christ by Tony Reinke.

Wesley on the Christian Life
Fred Sanders
Crossway is a not-for-profit Christian ministry that exists solely for the purpose of proclaiming the gospel through publishing gospel-centered, Bible-centered content. Learn more or donate today at crossway.org/about.